04 Jul Tigers Around the Throne

Posted at 13:52h in Blogs, London and the Raj by India Heritage

Tipu Sultan’s Legacy Is Alive In England, Thanks To The Spoils of War

If there is one personality from the Raj that captivates the English, it is the Tiger Of Mysore.
In England, Tipu Sultan’s legend is not just for some old India hands remembering a once implacable foe, but is one for the masses. From young school children to their parents, everyone seems fascinated by the “awful attractions” of Tipu’s dazzling spoils of war, which are displayed in England’s many museums and stately homes, keeping his legacy alive today.
If you ever want to see the extent of Tipumania in England, simply visit London’s popular Victoria & Albert Museum. Among its top attractions is the extensive loot plundered from Seringapatnam after Tipu’s death. 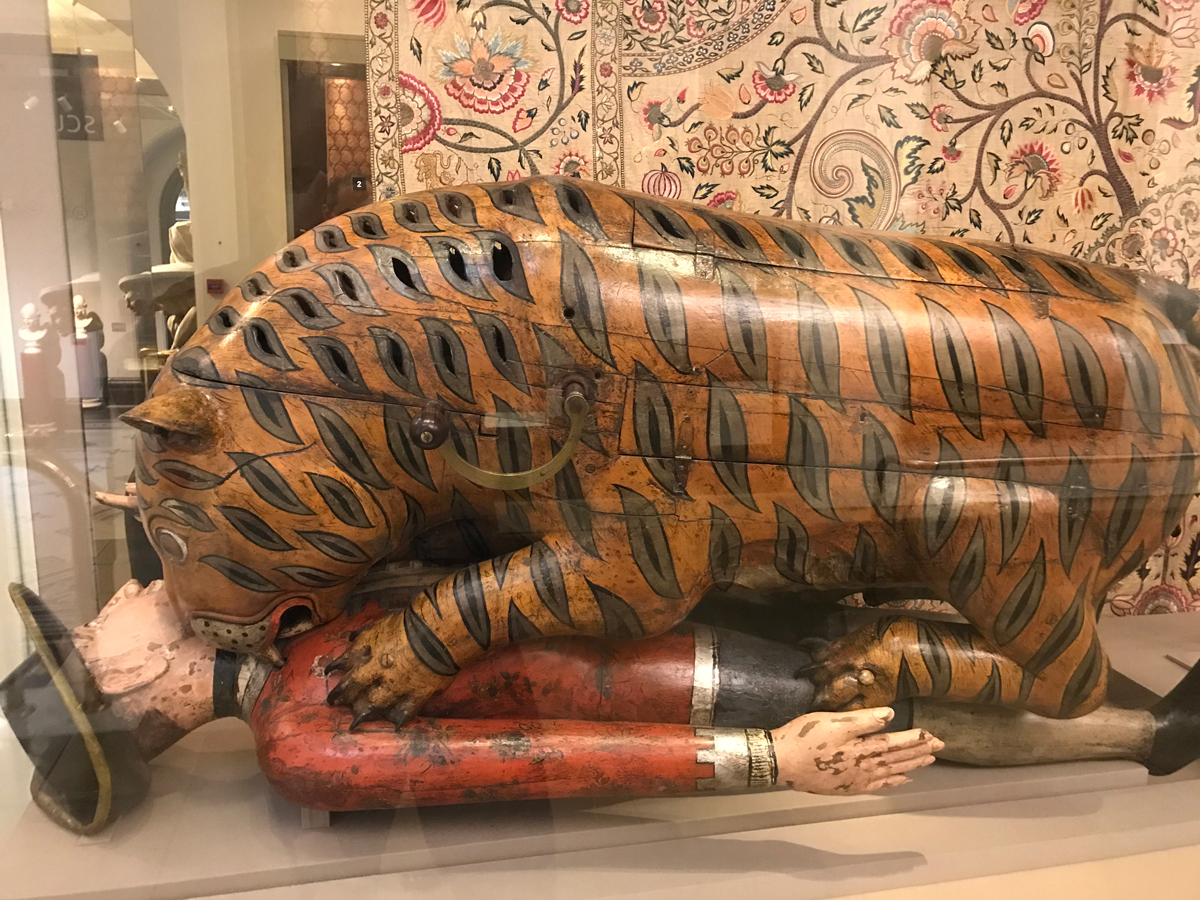 At pride of place as exhibit number one is the fantastic “Tipu’s Tiger”, always surrounded by excited crowds of selfie-clickers jostling for space. I had imagined this mechanical toy to be a small mantle-piece item, but it turned out to be much larger – a ferocious life-size tiger mauling an unfortunate English soldier dressed in the East India Company’s colours.
Tipu’s Tiger was manufactured in Serinagpatnam. It has an organ inside it, which when operated by turning a big brass handle causes the tiger to growl and the soldier to move his hands in despair, wailing in dying agony. From the moment Tipu’s Tiger arrived in London up till now, it has remained a most popular public attraction, and one can see why. 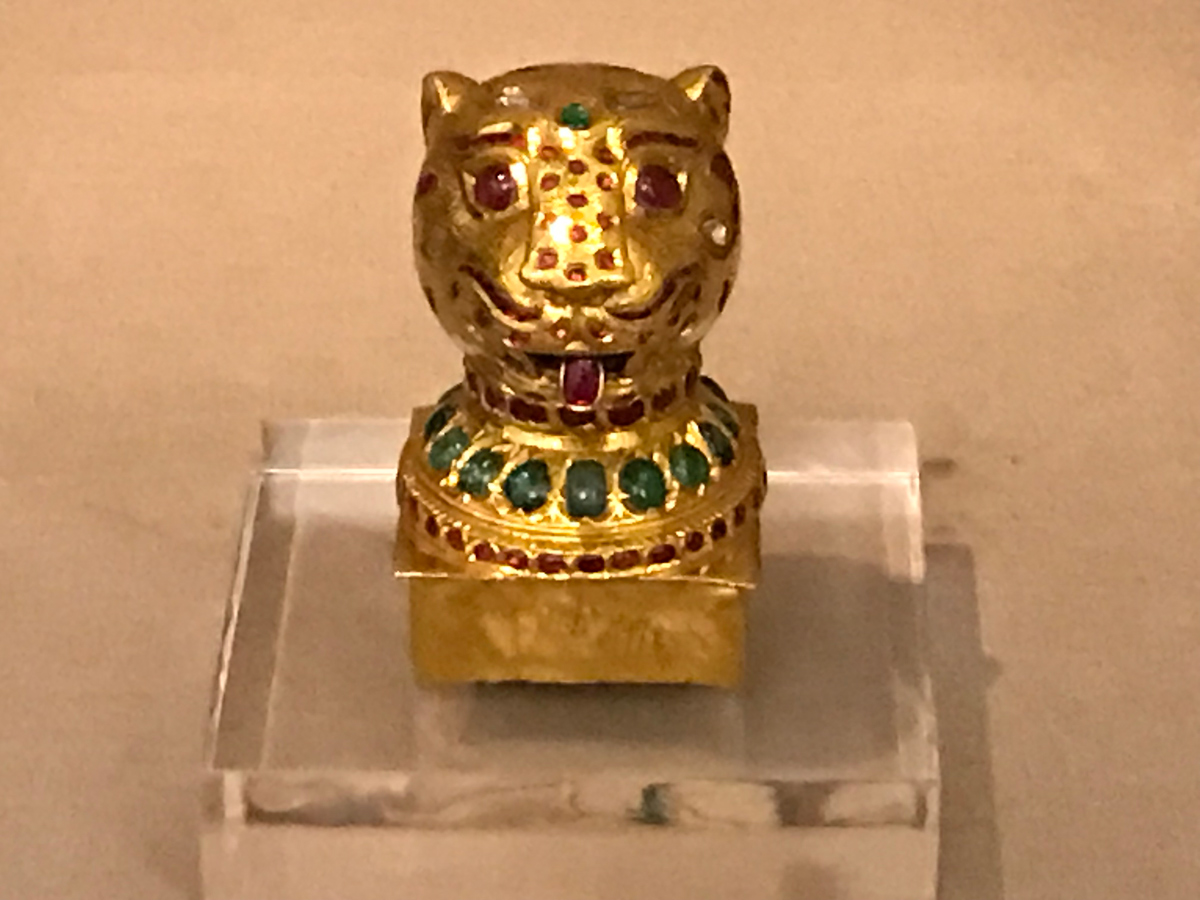 The Tiger Head Finial That Adorned Tipu’s Throne : The Symbolism Of Tipu’s Tiger Versus The British Lion Has Enthralled The English For Ages
Also exhibited at the Victoria & Albert Museum (…it calls itself “the schoolroom for everyone”) are more glittering items looted from Tipu’s palace; his pistols signed by its maker Sayyid Masum and dated 1796, swords with Tipu’s name inscribed in gold, his gold-handled walking stick and clothes…robes of white-muslin, a red-silk turban and diamond-set jewels. It’s all there, constantly drip-feeding Tipu’s magnetic pull on a spellbound audience. 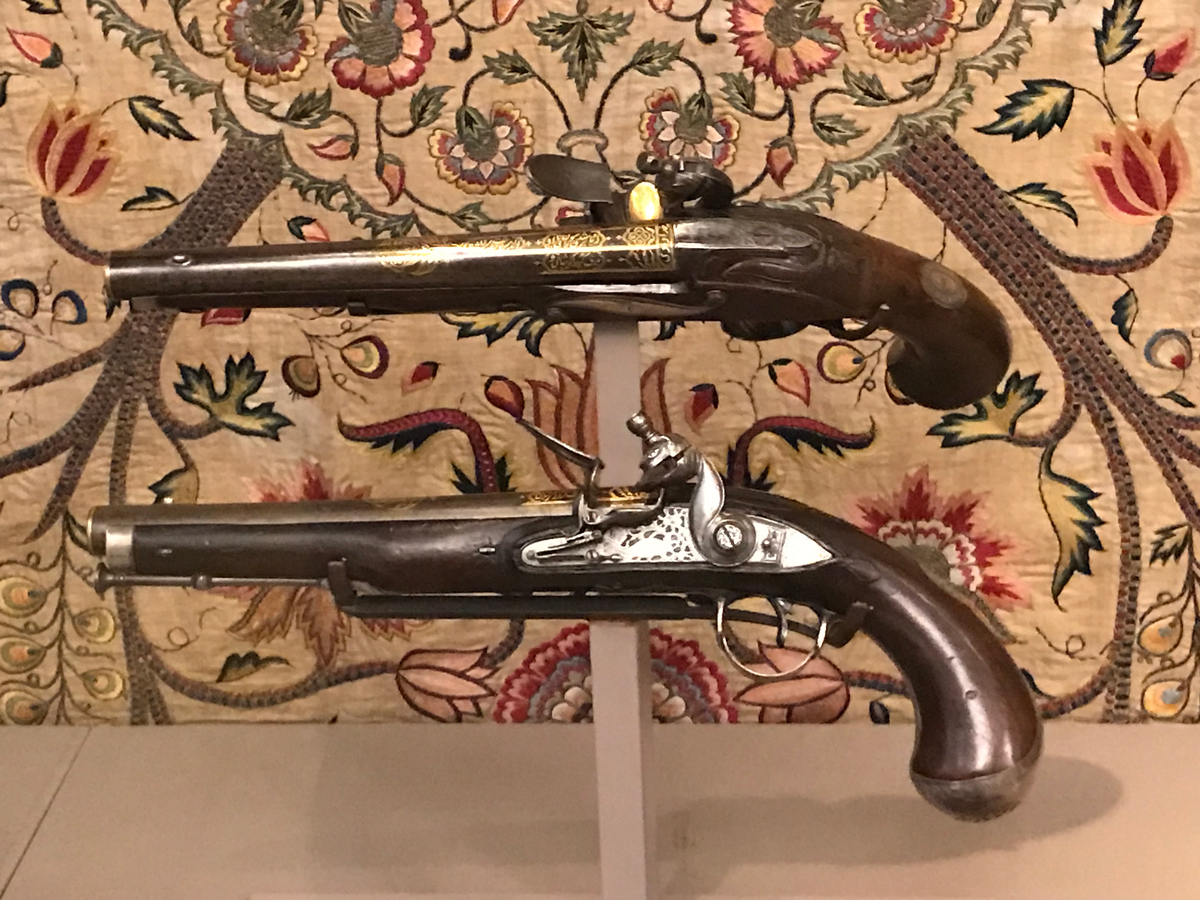 Tipu’s Pistols : Walnut, Steel And Gold; And Signed By The Maker Sayyid Masum Who Recorded Manufacture 1796 At Seringapatnam
Even lesser-known museums seem to vie for displays that are thought to be associated with Tipu. I visited the former home of Sir John Soane, an eighteenth century English architect known for his collection of all things exotic. His home has now been converted in to a small and tasteful museum.
Soane’s house, overlooking the green Lincoln Inn fields, was stuffed with his collections; from Greco Roman to Egyptian….fantastic statues, medallions, salvers. And in the middle of these were four ivory chairs thought to have been Tipu’s.
Sir John Soane had bought these chairs from an earlier owner, General Crewe, in the belief that they were seized from Tipu’s palace at the fall of Seringapatnam. I stood in front of these chairs – which had snarling tiger designs at the ends of its carved armrests, and tiger-claw legs – with the museum guides to discuss the likelihood of them actually being Tipu’s. It was unlikely, with the chairs probably manufactured at Murshidabad as gifts for some East India Company officials.
The very fact that we were discussing the mystery of these chairs and their tenuous connection with Tipu Sultan brings home England’s continued fascination with this central character from the Raj, still enduring today. 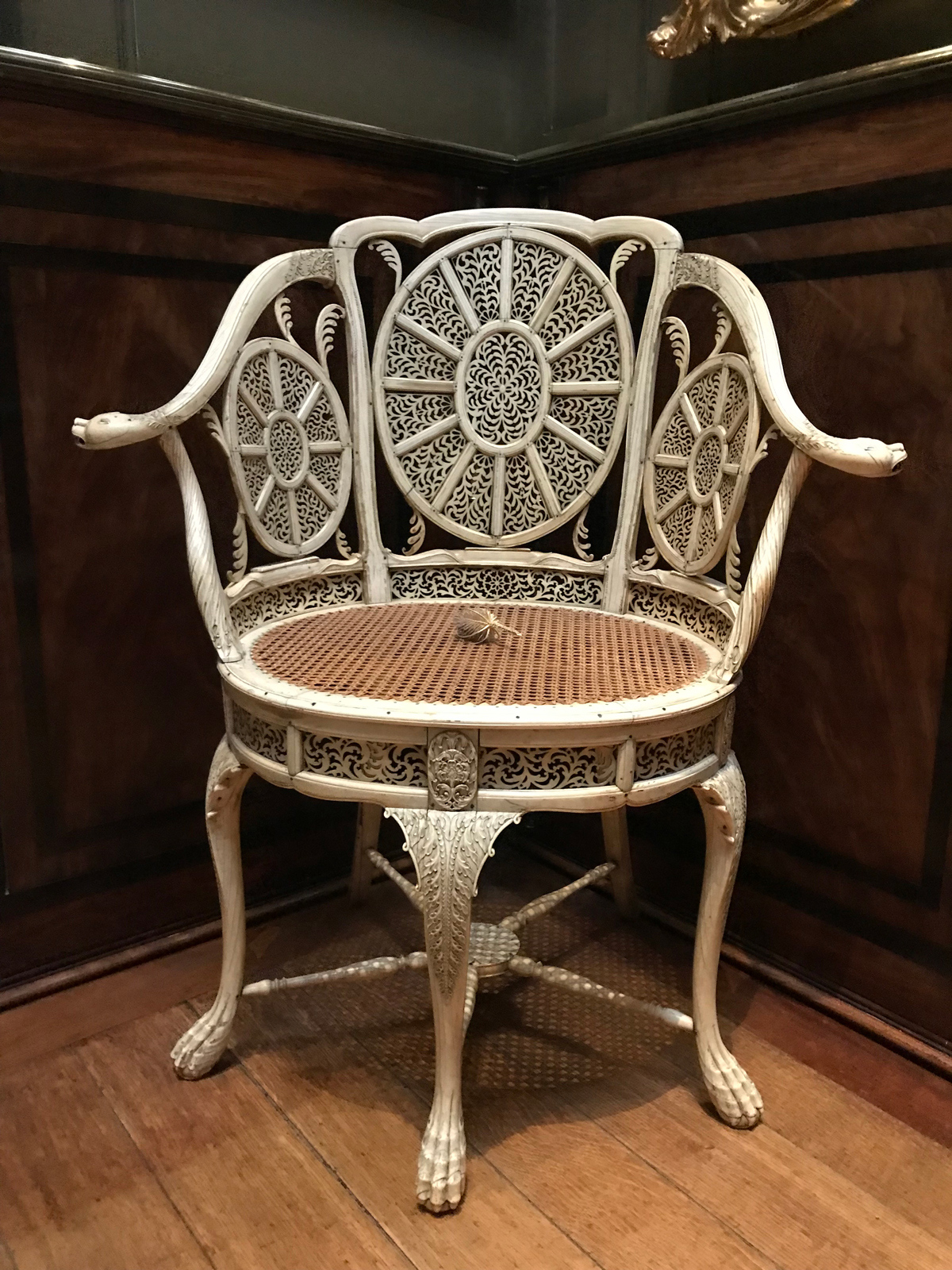 The Ivory Armchair With Tiger Symbols; Tipu’s Or Not?
By far the big daddy of all Tipu-paraphernalia is Powis Castle, which is at the edge of Wales, about a four-hour drive from London. Powis Castle is owned by a branch of Robert Clive’s family and has the biggest collection of Clive-stuff anywhere in the world, including plenty of what once belonged to Tipu.
I drove to Powis Castle along country roads that wound through the gently rolling Welsh hills, with stops for old-fashioned railroad crossings occasionally holding up traffic. The medieval Powis Castle loomed high on the buff of a hill, overlooking the small town of Welshpool where I stayed. 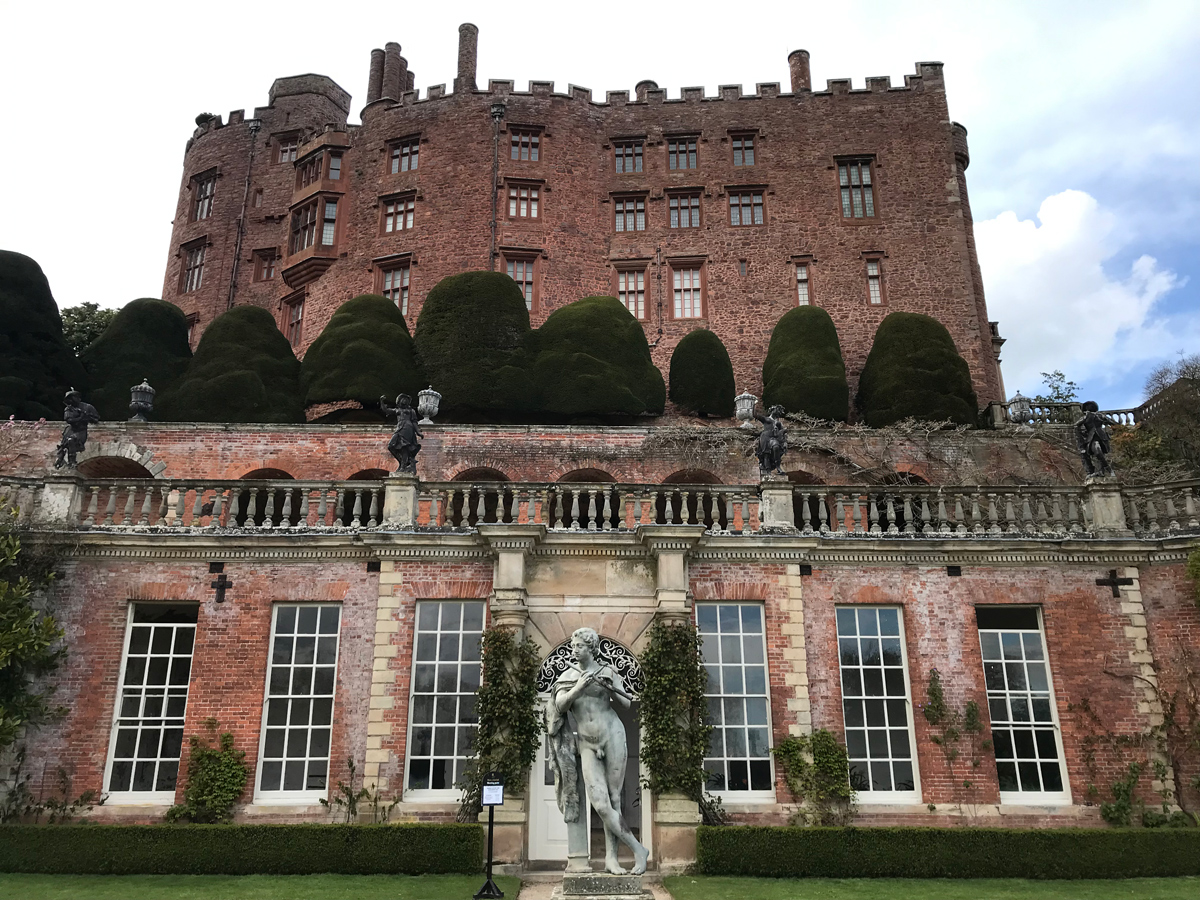 Powis Castle In Wales, Run By The National Trust And Home to Clive’s Collections From India
Powis Castle was built by a Welsh prince to keep out English invaders, but got its Clive-of-India connection when the Countess of Powis wed Robert Clive’s eldest son, Edward. It now houses a Clive Museum in what was once its former ballroom and is managed by the UK National Trust.
I entered to see huge oil paintings dominating the high walls, of the Treaty of Allahabad being signed; The Mughal Emperor Shah Alam was seated on a wooden platform, granting the diwani (tax collection) rights for Bengal, Bihar and Orissa to an upright Robert Clive, effectively laying the foundation of the British Raj in India.

The long exhibit hall was awash with the plunder of Clive from India; hundreds of shields, swords, spearheads, helmets, mail coats, elephant goads as well as everyday items; jackets and dresses, writing slopes, chess boards, rose water sprinklers…
There was a massive carved wooden palki (palanquin), normally carried by six men, which was picked up by Clive at the Battle of Plassey, and possibly abandoned by a fleeing Siraj ud Daulah when he lost the pivotal battle.
Also displayed was the magnificent state tent of Tipu, made of thick chintz and painted with a floral theme of red roses twined around green leaves. Could this be the tent where Tipu surrendered his two young sons to Lord Cornwallis, as part of the devastating terms of the Treaty of Seringapatnam ? 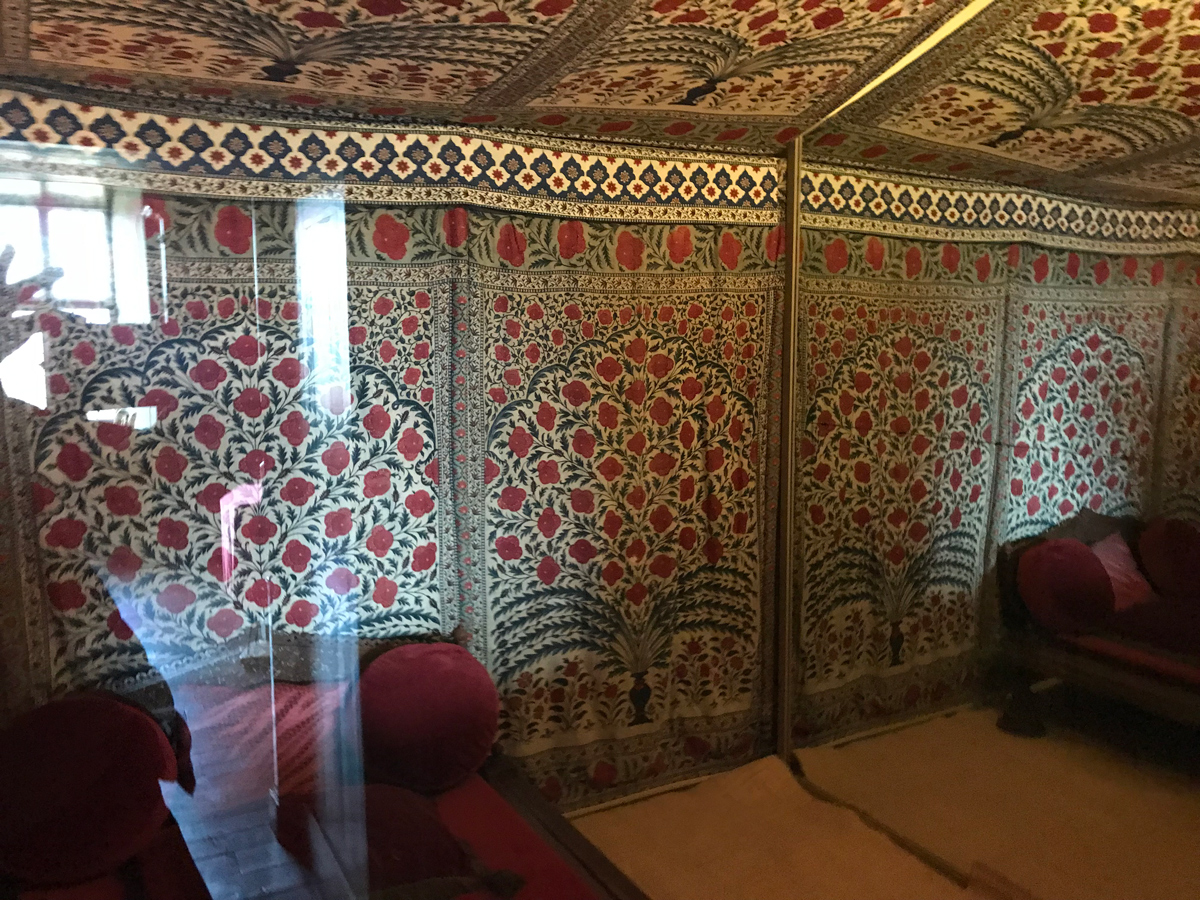 Tipu’s State Tent….Imagine Him In It, Roaring Against The English
I stayed that night at a quaint former coach-inn at Welshpool and drove back to London the next day; enough time for me to reflect on this phenomenon called Tipu and his hold on the English imagination.
Tipu was, after all, from just a two-generation dynasty; for it was only the father Haider Ali and the son Tipu Sultan. Together, they had ruled for barely 38 years. And yet, Tipu is remembered and respected as the final bulwark to British imperialism and is firmly embedded in British consciousness.
It’s not difficult to see the reasons for Tipu’s hold on public imagination; given Tipu’s exotic and larger-than-life personality, the stories of his fabled power and riches, terrifying tales of his attacks on English forces and the fact that he died valiantly in battle, sword in hand.
Added to this was Tipu Sultan’s clever use of symbolism as an expression of his power; Tipu’s Tiger versus the British Lion. The visual imagery of which has remained powerful enough to last to this day.
Sources:
Print page