Posted at 03:30h in Blogs, Delhi, Most-Read by India Heritage

Connaught Place is the busy commercial heart of Delhi, heaving with shops and showrooms and restaurants. It was built about a hundred years ago by the British, between 1929 and 1933, as part of the grand scheme of things for their spanking new capital, New Delhi.

Before Connaught Place was built, this area was largely scrubland, filled with kikar trees and jackals. There were three small villages in the vicinity – Madhoganj, Raja ka Bazaar and Jaisingpura – hugging the Qutub Road, an important passage existing from the time of Mughal India that connected Shahjahanabad (old Delhi) with Qutub (Mehrauli). 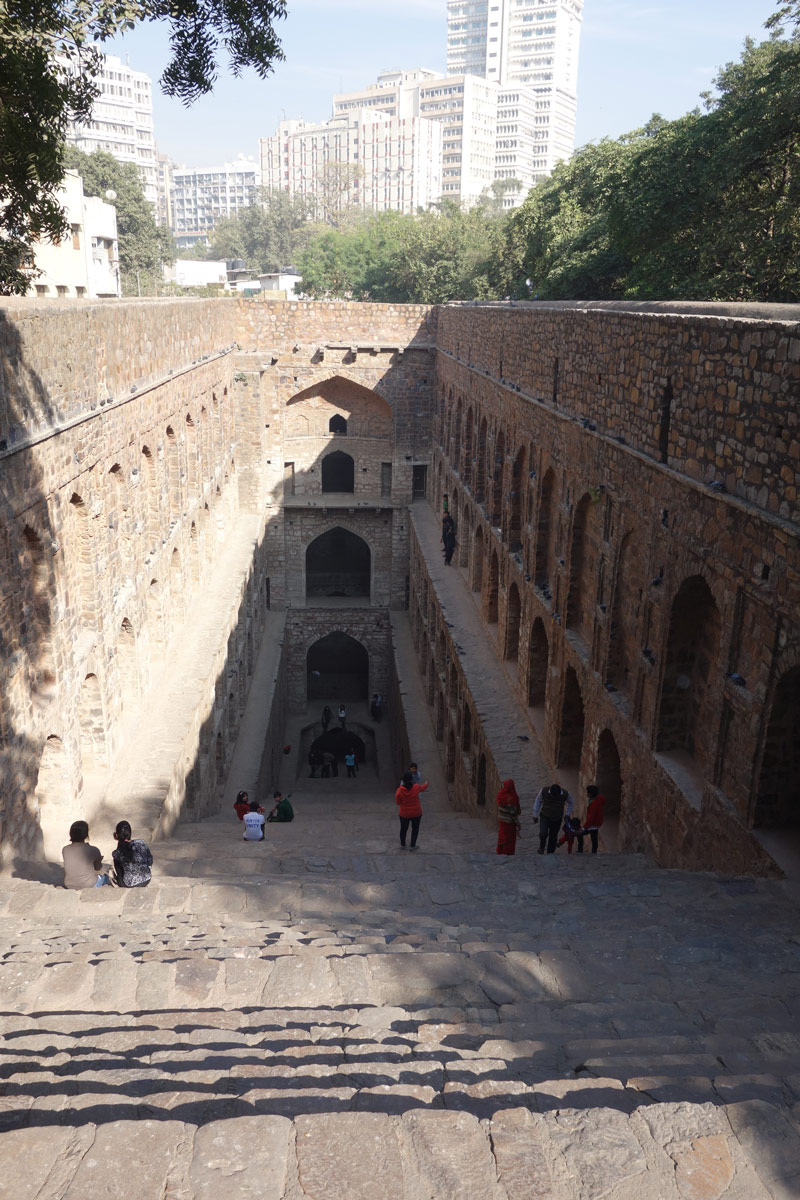 The ancient stepwell Agrasen ki Baoli, Surrounded by the High-Rises of Connaught Place

Delhi is in fact blessed to have about ten such baolis, still intact, dotted across the city. Of these, Agrasen Ki Baoli is the best preserved of the lot, neatly maintained thanks to its protection and upkeep by the ASI.

I visited Agrasen Ki Baoli on a grey December morning and found myself sharing the space with a few foreign tourists and a bunch of excited teenagers on a school trip. The school children sat on the ancient stone steps in bunches, chatting and gossiping, perhaps exactly as their counterparts would have done many centuries ago. The only difference seemed to be the selfies.
Standing at the top of Agrasen Ki Baoli, with the stone steps disappearing into the darkness at the bottom, it is easy to imagine the role these stepwells played for communities in medieval India. They acted not only as reservoirs for water management but also as social centres for gathering and gossip and a staging post for travellers. 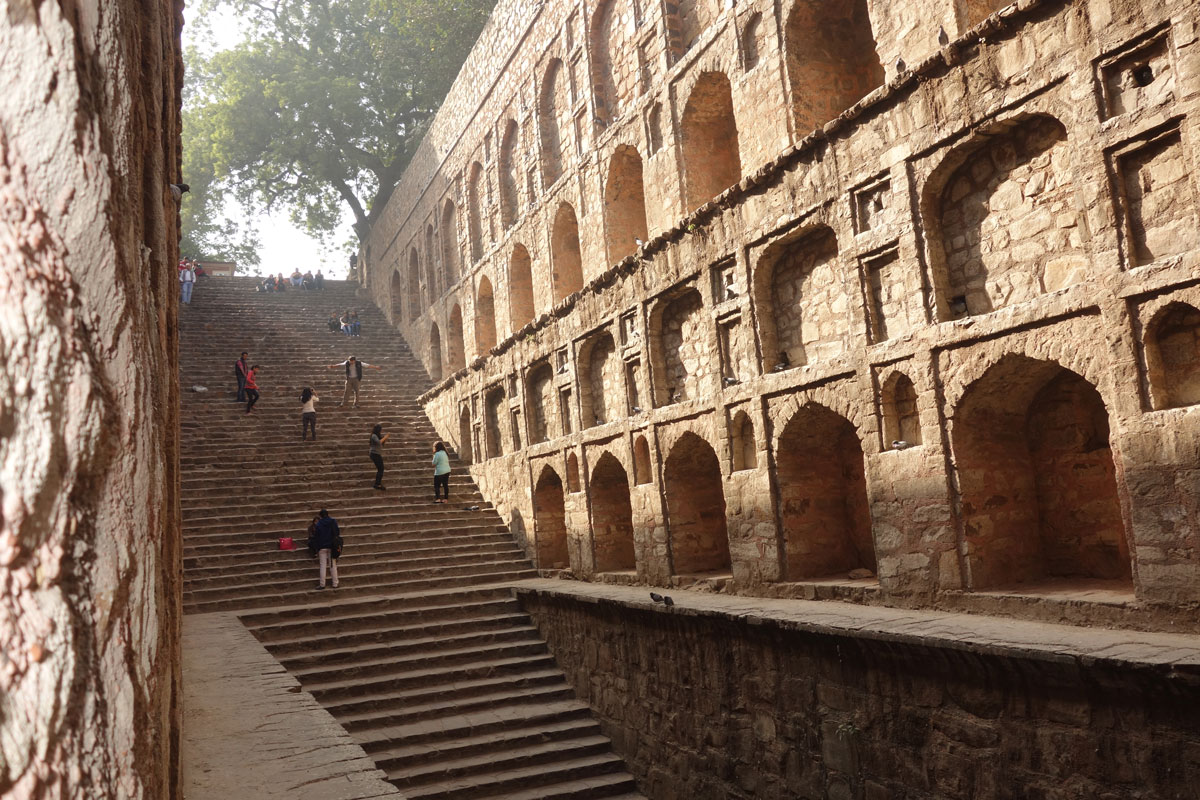 The View from the Bottom of the Baoli, Looking Up
Agrasen ki baoli has a hundred and eight steps to get down to the bottom, so climbing all the way down and up again is quite an exercise. It is best done by taking your time, stopping often to sit on the steps or the side ledges and letting the atmosphere of the place wash over you. If you are the more adventurous type, you could also explore the little slit-like openings on the side, which then lead to further narrow passages and ultimately emerge directly onto the upper ledges. This will allow you some really dramatic photos, but could also be potentially dangerous as the ledges have no railings.

As you descend down the steps of the baoli, the very bottom is at least a few degrees cooler than at the top due to the absence of direct sunlight. In the cold winter weather, which is when I visited, this may not have been much of an advantage. But, I could well imagine the draw of the baoli in the searing summers, when the coolness of these lower floors would be a very welcome respite.

A small tunnel, about waist high, runs through the back wall of the baoli to the other side. As it was well past the rainy season, the bottom of the baoli was dry, and this tunnel both visible and accessible. A few daredevil school kids, obviously with a strong sense of discovery, had crouched their way through this passage to emerge on the other side. I could hear their excited voices echoing off the stonewalls.
You could do the same. Crouching to enter the tunnel, you will need to walk about ten paces through the damp passageway to come out on the other side. You will emerge at the bottom of a circular well shaft, the walls paved with solid stone slabs. And, if you look up, you can notice that the very top of the well has been fenced off with a wire net, probably for safety.
December or wintertime is probably the only occasion in which you could visit this section of the baoli. That is because this small tunnel at the very bottom of the baoli is what connects the circular well to the step-section of the baoli. letting the water flow from the storage well to the main structure. I assume that during the monsoons, when the well fills up with water, this small passage and the lower steps of the baoli will not be accessible. 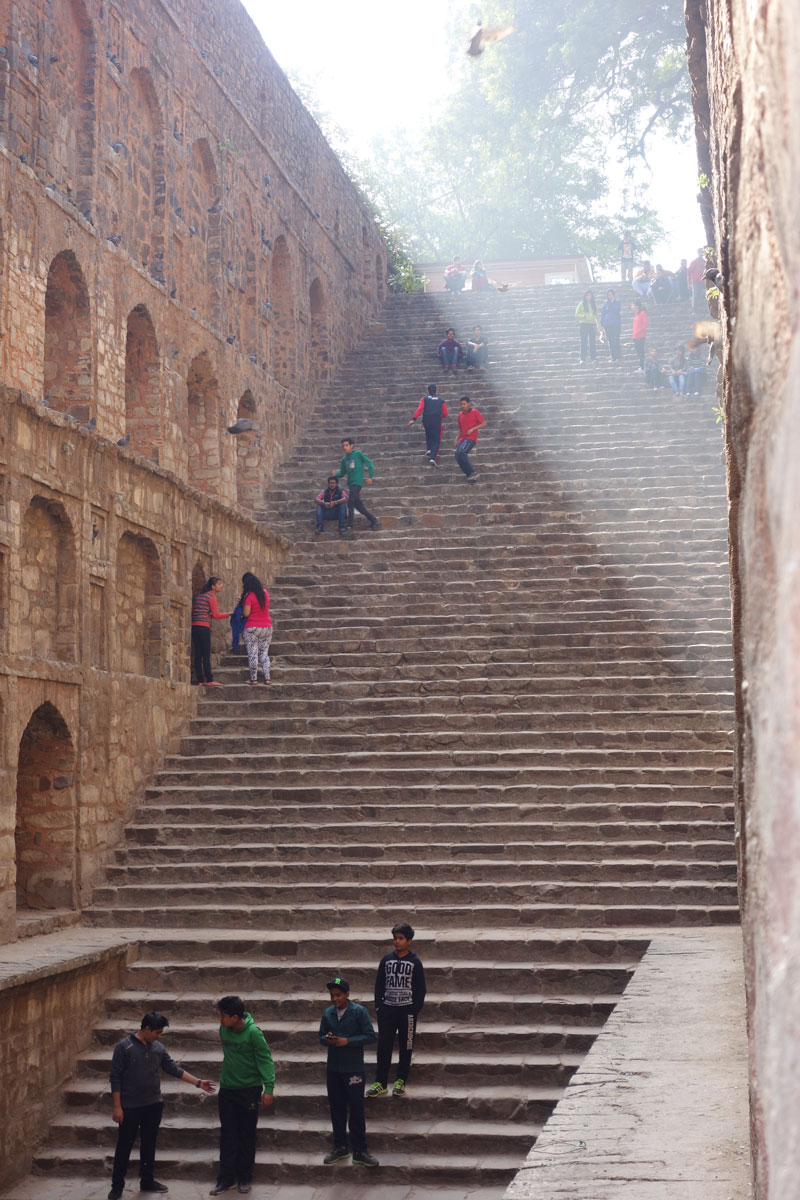 Winter Sunshine Streaming into the Baoli, Looking up from the Bottom
Back at the top of the baoli, there is one more mysterious building to explore – a small, half-broken mosque. Many baolis have religious shrines attached to them, as these baolis were frequently used for religious gatherings, and often prayed in, especially by women, for appeasing the Gods.

A Half-Broken Mosque with Unusual Features, near the Entry Gate to the Baoli
This particular mosque has two unusual traits that you can look out for. One is its whale back roof – which is a roof with slightly arched slopes – that is highly unusual for a mosque. And, the second is its unique red-colored pillars, which, if you look closely at the bottom, are carved with Buddhist motifs at the base. 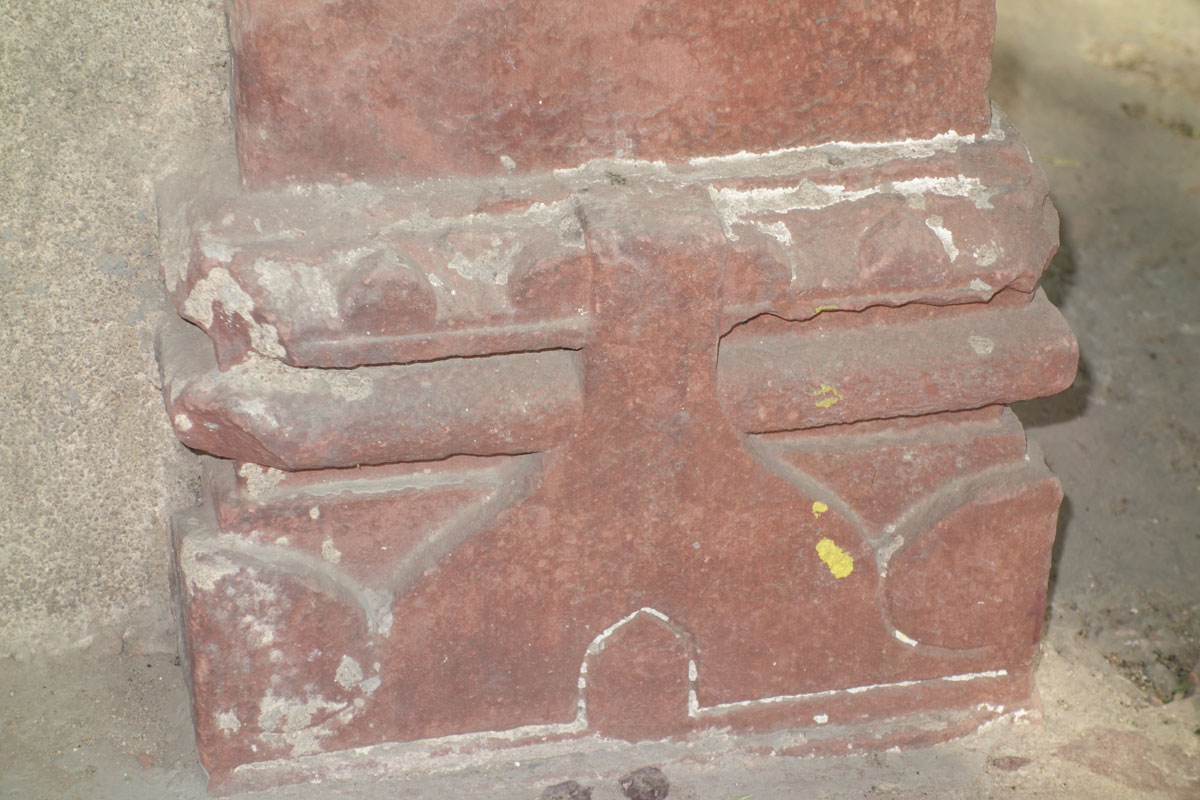 Raja Agrasen and the Kingdom of Agroha

Agrasen Ki Baoli is said to have been built by Raja Agrasen, the famous forefather of the prosperous Agrawal community. But – judging by the style of its architecture – this baoli was probably repaired during the Tughlaq or Lodi eras, in the 14th or 15th century.

Raja Agrasen was the king of Agroha, a city of traders, from whom the prosperous Agrawal community claims descent. The Agroha kingdom was not far from Delhi, close to modern-day Hisar. Legend has it that a hundred thousand traders lived in Agroha during its heyday. Any immigrant wanting to settle in the city would be given a brick and a rupee by each inhabitant, providing him a hundred thousand bricks to build himself a house and a hundred thousand rupees to start his new business.

Over time, the residents of Agroha spread out all over India as the Agrawal community, an influential and respected community who are well recognized for their commercial skills.

Baolis, or stepwells, is an architecture that is entirely unique to India.

These baolis were usually built by kings, nobles or rich merchants for public use. They served mainly the more arid parts of India, where water management was important due to the seasonal fluctuations in rain. Many of these old baolis can still be seen today in Delhi, Rajasthan, Gujarat and even Pakistan.

Apart from being used for water, baolis were important centres for social gatherings and religious ceremonies. Women were its main users, as it was they who collected water and prayed to the local Gods for blessings. This is why so many baolis have places of worship attached to them. And in fact, it could well be the reason for their continued existence and survival.

Most baolis have a similar structure. There is a vertical shaft or well from which water is drawn and a series of wide stone cut stairs that lead down to the water source. These steps could descend four or five floors, each floor ringed with chambers and small rooms, often with beautiful ornamentation and elaborate carvings. They acted as resting places and cool retreats.

I find baolis magical places to visit. Delhi is really lucky to have several baolis still intact. Some of these have been recently restored and are becoming increasingly popular with tourists.

Nizamuddin Ki Baoli is attached to the Nizamuddin dargah and is easily accessible. It has a most interesting backstory. Built by the Sufi saint Nizamuddin Auliya in the 1320s as a source of water for his famous kanqah, it ran into trouble with the Sultanate ruler Ghiasuddin Tughlaq who was at the same time constructing his ambitious capital, the still imposing Tuqhlaqabad Fort. The two men got involved in continuous squabbles, clashing over workmen. While Tughlaq wanted all the available workmen to work on the great walls of his fort, the workmen themselves often defied the king, preferring to work for the saint instead. Ghiasuddin was campaigning in Bengal when he heard the news and vowed to punish the saint when he returned. But, Auliya replied with the famous words “Dilli hanuz dur ast” (Delhi is yet far off).

On Ghiasuddin’s return, when he was just a day’s march from Delhi, he was killed by his own son Muhammad bin Tughlaq, when a pavilion was engineered to collapse on him. Sultan Ghiasuddin is buried at his Tughlaqabad Fort in Delhi, while water still flows in Nizamuddin’s baoli.

The Mehrauli locality, which is rich in historical monuments, also has two baolis that can be visited. Gandak Ki Baoli’s green water is a favourite plunging pool for young boys from the neighbourhood. And the Rajon Ki Baoli, within the Mehrauli Archaeologocal Park, so named because it was apparently frequented by rajons or masons, is one of Delhi’s most decorative and ornately designed baolis.

Also, among the more unique baolis in Delhi, is the L-shaped baoli within the Red Fort, which was used during the freedom movement to imprison INA Officers Shah Nawaz Khan, PK Sehgal and Gurbaksh Singh Dhillion (“…Lal Qiley say aai aawaz, Sehgal Dhillion Shah Nawaz…”); the rectangular baoli inside the Purana Qila, handsome and well worth a visit; and a Lodi era baoli with charismatic turrets, hidden inside the residential compounds of RK Puram.

Agrasen Ki Baoli is on Hailey Lane, off Hailey Road near Connaught Place. The closest metro is Rajiv Chowk from where it is a ten-minute walk. Exit from Gate five of the metro station onto Kasturba Gandhi Marg. Walk past the Tolstoy Marg crossing, and turn left onto Hailey Road, and then left again for Hailey Lane. The baoli is about 30 meters down Hailey Lane.