Posted at 14:39h in Blogs, Kolkata and the Verdant East by India Heritage

Chances are that unless you’re a serious student of Kolkata’s colonial history or a regular visitor to the city’s historic churches, you would never have heard of Bishop Reginald Heber.
Bishop Heber was Kolkata’s second bishop, following Thomas Middleton who was the first. When Middleton died suddenly of sunstroke (he is buried under the alter of St John’s church), Heber made the long journey from England to Kolkata and spent four action-packed years here, before his own untimely death in 1827 in Trichy where he lies buried. It is a sad fact that each of the first seven bishops of Calcutta had died while in office. 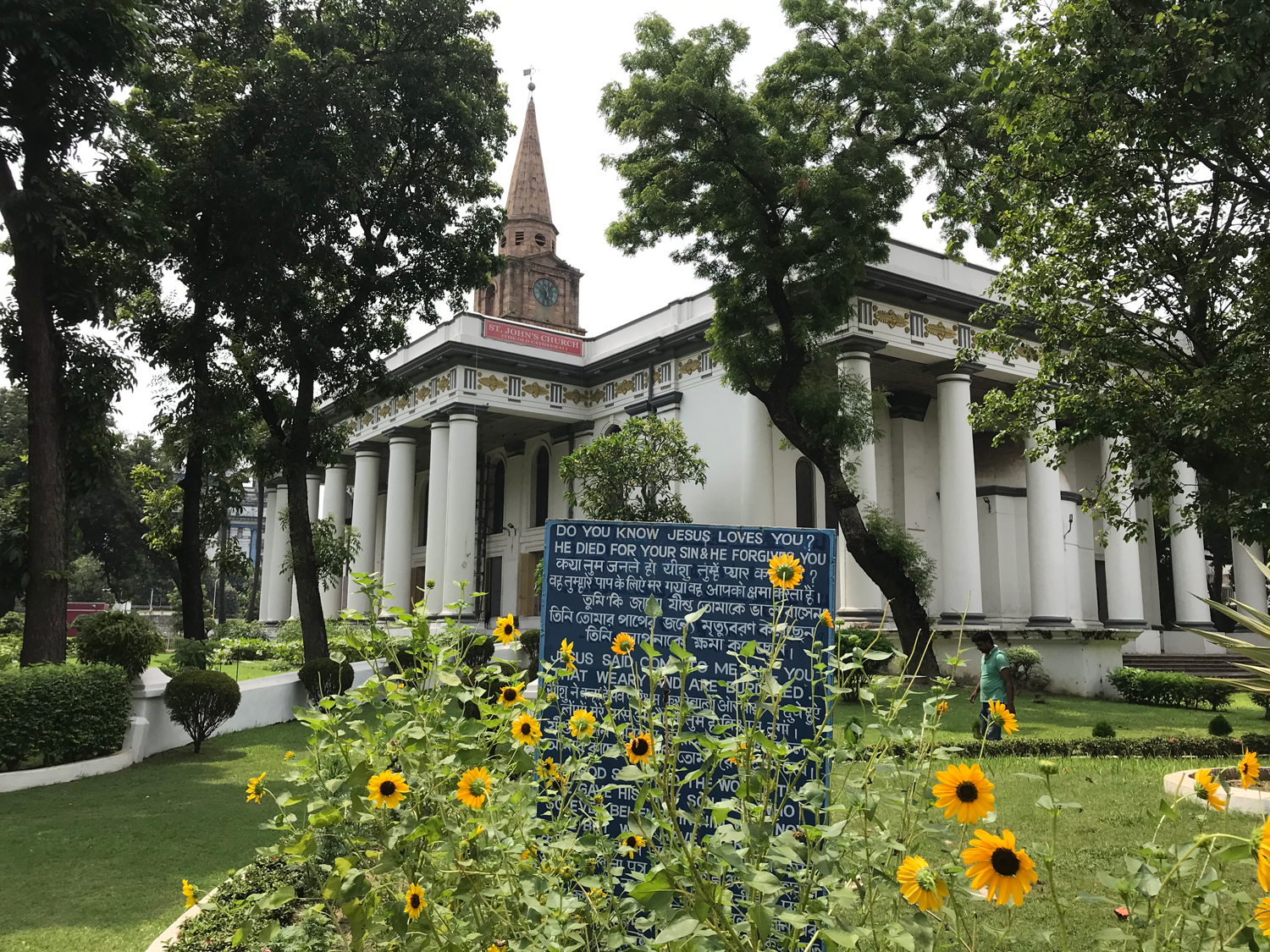 Kolkata’s St John’s church : where Middleton is buried and Heber preached his first sermon in India
Given Heber’s stature, it’s strange that he is almost forgotten in Kolkata. While Middleton is buried in the city, Heber’s memory has faded. This is probably because at the time, the newly formed diocese of Kolkata had also covered the territories of Bangladesh and Sri Lanka and right up to Australia, which led to Heber travelling extensively through India and eventually dying in faraway Trichy in the south. As a result, there are numerous schools and colleges honoring Heber in Tamil Nadu instead. 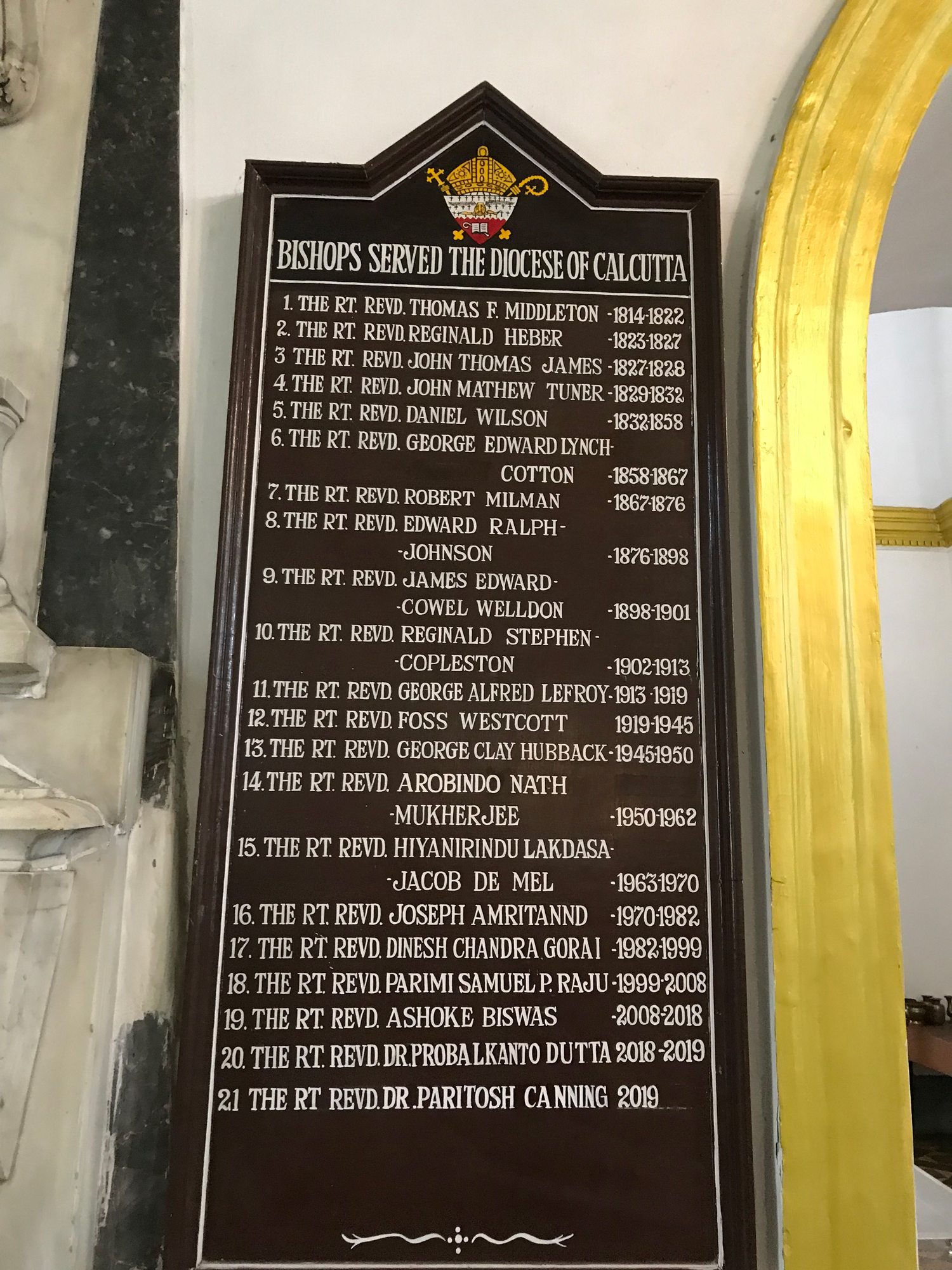 Second from the top; Bishop Reginald Heber has pride of place as Kolkata’s Second Bishop

How I discovered Heber in a rural corner of England

The first I heard of Reginald Heber and his connections with Kolkata was when I was in the rural parish of Shropshire in England, researching the back story of Robert Clive (or Clive of India, another man with strong Kolkata connections). I was visiting the small town of Market Drayton where Clive was born and had spent his unruly teenage years before being shipped off to India, and my friends suggested that I also go to the adjoining village of Hodnet, which too had a Kolkata connection being the home of the Heber family. 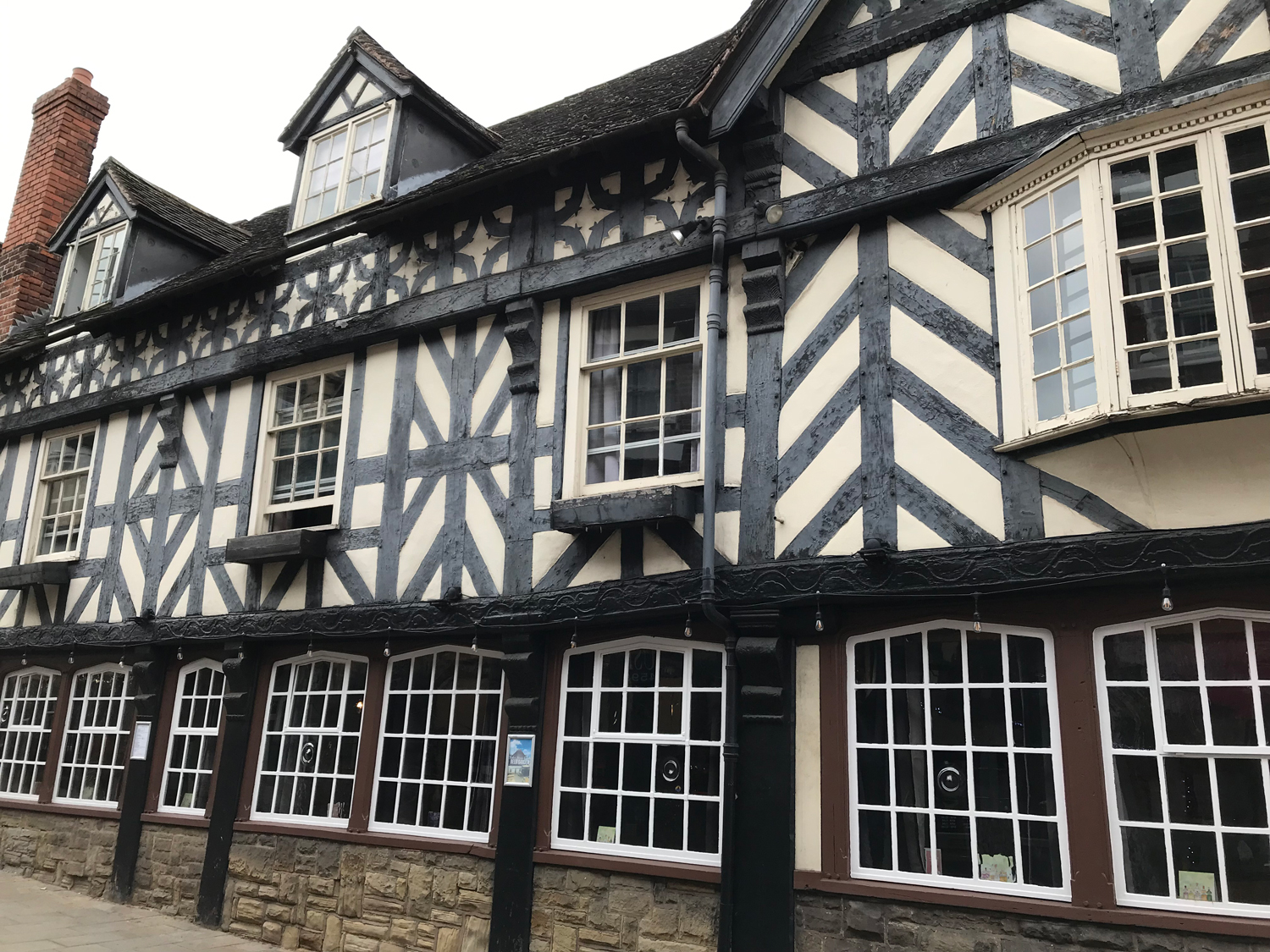 The Black and White Tudor style houses of village Hodnet, home of the Heber family
Hodnet was a pretty village sprinkled with Tudor style black-and-white houses as if time had stood still. At the village’s St Luke’s church, I was introduced for the first time to Bishop Heber, who had been the much-admired parish priest here for a long 16 years before leaving for Kolkata, never to come back.
The Heber’s were still big in Hodnet, owning most of the village, including the pub where I was staying. Bishop Heber’s direct descendant, Sir Algernon Heber-Percy, was now the Lord of the Manor and patron of the church, and I was told that the church was a must-see because of its connections with Kolkata.

Reginald Heber was an Oxford-educated man of letters, known to be a poet and a thinker. When he was first offered the bishopric of (then) Calcutta upon the death of Middleton, he had refused the offer, concerned about the effect India’s climate may have on the health of his infant daughter Emily. Reginald and his wife Amelia agonized for days over the decision, consulting a host of local doctors for advice before finally taking the plunge and “accepting the offer gratefully”. 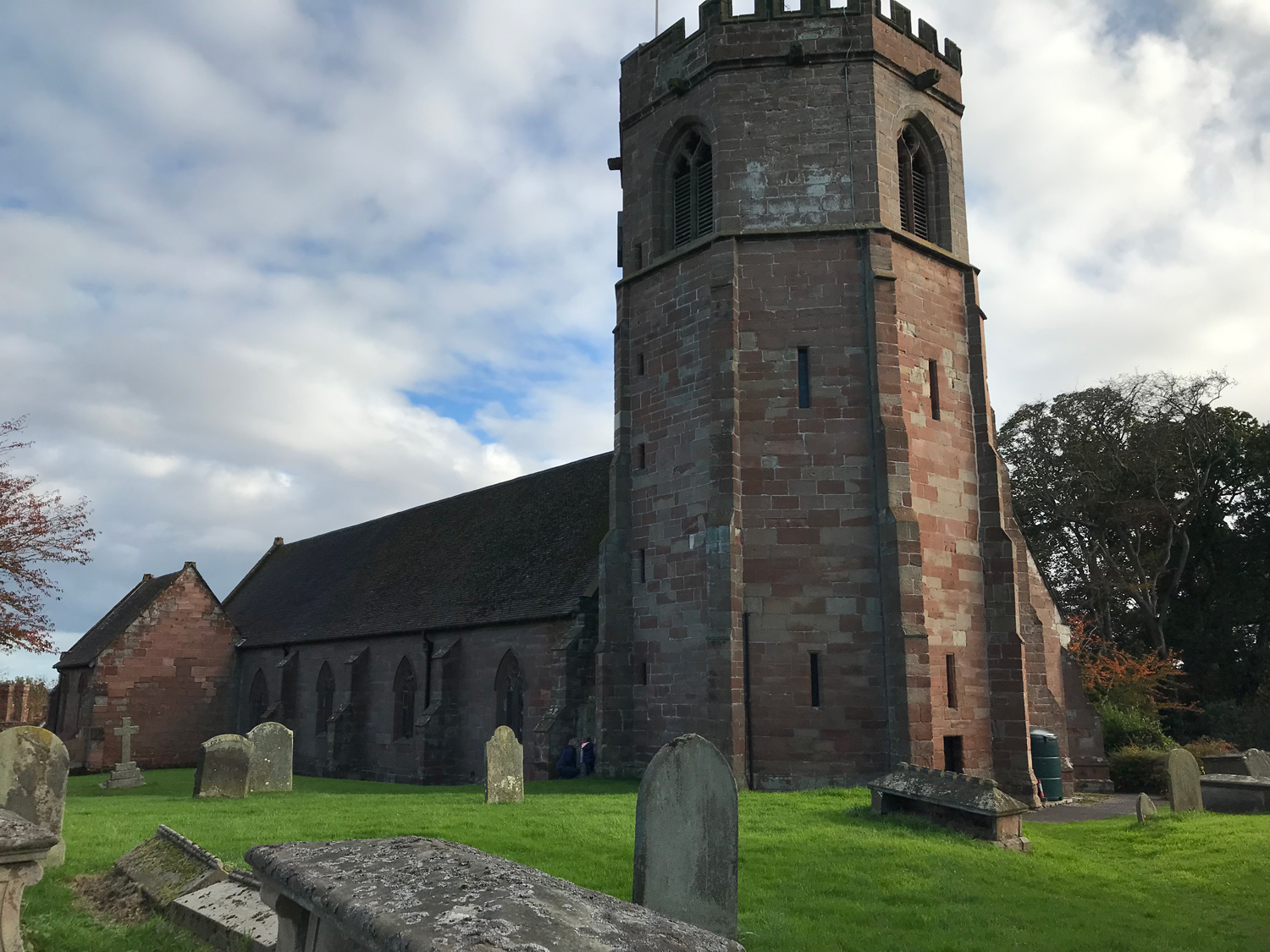 The tower-like façade of Hodnet’s St Luke’s Church; where Bishop Heber was parish priest for 16 years before leaving for India, never to return
What made Heber leave his familiar surroundings for India? Being financially well-off at home, it was clearly not the salary of “£5000 per annum and a retiring pension of £1500”* that attracted him, which as his offer letter pointed out could not “compensate you for quitting the situation and comforts you now enjoy”. Heber, in his farewell notes to friends in Hodnet, mentions a “lurking fondness for all which belongs to India and Asia” and the chance to distinguish himself in an “unbounded opportunity for professional utility”. This interest in India later became apparent in the way Heber conducted himself once he got here, but more of that later.

The legend of Bishop Heber’s famous blue tiles (from Kolkata…??)

I stepped in to St Luke’s Church’s slightly musty interiors, guided by Chris Ashley, a local history buff showing me around. Together we unlocked the wrought-iron doors to the Heber chapel – its keys had been left dangling on a hook by its side – where many of the Heber family members rested. I saw the pulpit where Reginald Heber preached his final sermon at Hodnet, bidding farewell to the parish he had served for so long. And then I was shown the church’s biggest mystery, it’s two unique blue tiles.
All of the floor tiles of St Luke’s church had the same pattern, apart from two special tiles placed close to the alter. These two had a different design; of a distinctive bishop’s mitre (the ceremonial headdress of a bishop) with the initials “Rh” – for Reginald Heber – inscribed. It’s believed that these tiles were originally from St John’s Church in Kolkata, which is where Bishop Heber preached his sermons in India, and had been brought here from Kolkata in recognition of Heber. 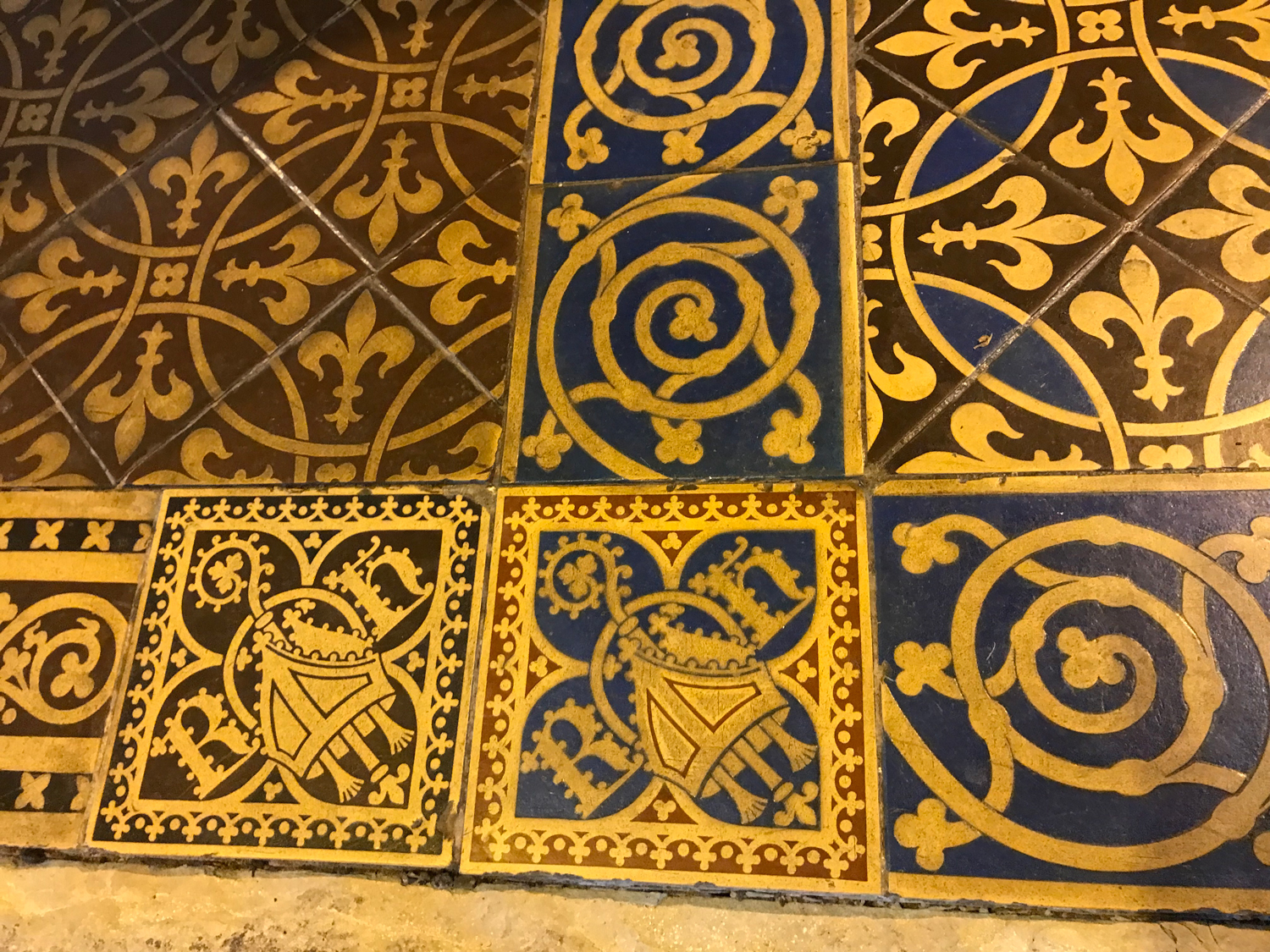 Look closely now; the two tiles at the bottom with a bishop’s hat and “R h” engraved on them…legend says, all the way from St John’s Church in Kolkata
Could this be true? It had certainly piqued my curiosity. Sitting on the silent wooden pews of St Luke’s Church in Hodnet, I resolved that when I got back to Kolkata I would try and find out.

Heber left England for Kolkata in June 1823 and used the four-month sea voyage to teach himself Persian and Hindi, even beginning letters home with a Persian proverb he liked “a letter is half a meeting”.* Once in Kolkata, he plunged quickly in to ecclesiastical work including the affairs of the Bishops College, which was the brainchild of Middleton but was struggling now for leadership.
Though the East India Company was active in India through the 1700s, it was only from 1813 onwards that Christian missionaries were allowed to preach in the company’s territories. Before this, the company’s directors blocked religious activity fearing it would distract from the focus on trade and profit. Middleton, when he became Kolkata’s first bishop, believed there was need for a Bishop’s College near the city for preparing natives to be future preachers as well as provide broader education in English and the classics for the translation of scriptures in to local languages.
Warren Hastings, the then Governor-General, had granted land for the Bishop’s College at Shibpur on the opposite bank of the (yet un-bridged) Hooghly, considered suitable both for its seclusion as well as proximity to Calcutta. Unfortunately, though Middleton set the wheels in motion, he died before the college was complete and it was left to Heber to progress it; to hire the professors, receive the first students (by the time of Heber’s death in 1826 the college had 10 students), ensure that scholarships were granted for free studies. Today, the original buildings of Bishop’s College still exist in Shibpur as The Indian Institute of Science, while Bishop’s College itself was shifted to its present location on Lower Circular Road.

And what of the blue tiles?

Alas, my quest for Bishop Heber’s blue church tiles went in vain. I dug in to all I could find on where Bishop Heber preached and lived in Kolkata, visiting historic churches and residences associated with him, but drew a blank. 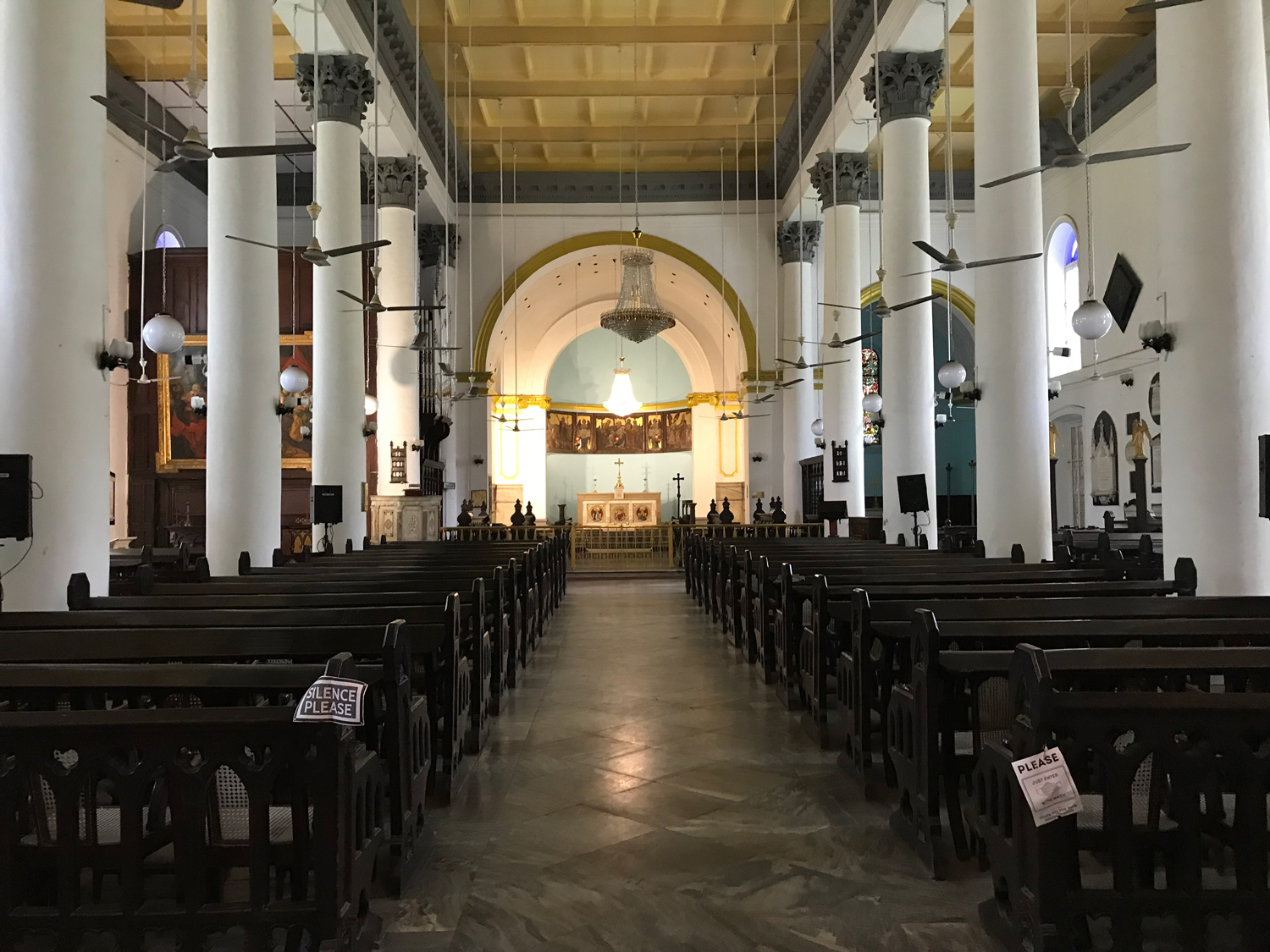 Not a blue tile in sight at Kolkata’s St John’s Church….
I called on St John’s Church, where Heber delivered his sermons and his name is prominently displayed as the second bishop, after Middleton. Explaining the story of the blue Hodnet tiles to Reverend Pradip Nanda, the present vicar, we scoured the church but returned empty-handed.
I visited Loreto House, entering the impressive mansion-like home that hosts the offices of the Loreto nuns. The nuns have been established here since 1841, but prior to that the previous occupants were Henry Vansittart (Bengal Governor in the 1760s), Sir Elijah Impey (the first Chief Justice of Calcutta’s Supreme Court and friend of Warren Hastings) and Bishop Heber during his brief stint in Calcutta. An iconic spiral staircase still survives from when the house was originally built, and perhaps Heber climbed them daily when he lived here, but there was no sign of blue tiles. 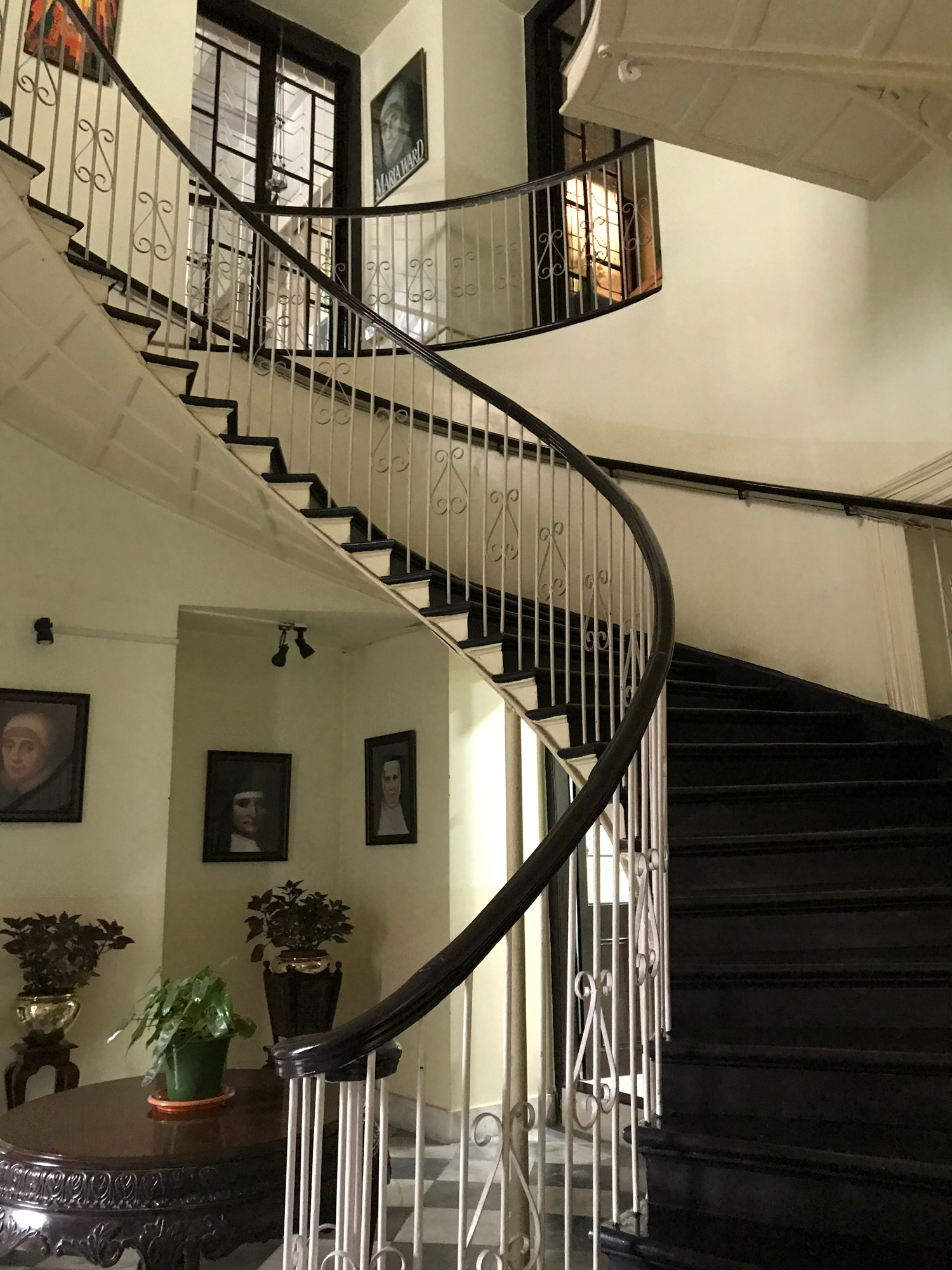 Loreto House’s original swirling staircase still survives, but no sign of the Hodnet tiles
So my feature on Bishop Heber remains strangely unfinished. I came across a story which connects different eras from colonial to now, varied churches in diverse lands, and links the people of a small village in rural England with the bustling metropolis of Kolkata. But no closure on the missing church tiles.
* “The life of Reginald Heber, Lord Bishop of Calcutta”. By Amelia Heber (pg 88, 91, 109, 136, 261, 262, 269, 270, 389, 412)
Sources:
Print page