Posted at 00:34h in Blogs, Delhi, Most-Read by India Heritage

A Stunning Medieval Wonder Right Next to Saket’s Malls

Just across the road from Saket’s teeming shopping malls is the magnificent Khirkee Masjid, a stunning, seven centuries old, Tughlaq era historical gem and an outstanding reminder of Delhi’s past.
I would rate Khirkee Masjid as easily one of Delhi’s most atmospheric monuments, made all the more memorable by the sheer incongruity of its surroundings, literally a stone’s throw from the chic modernity of Saket’s shopping centers. 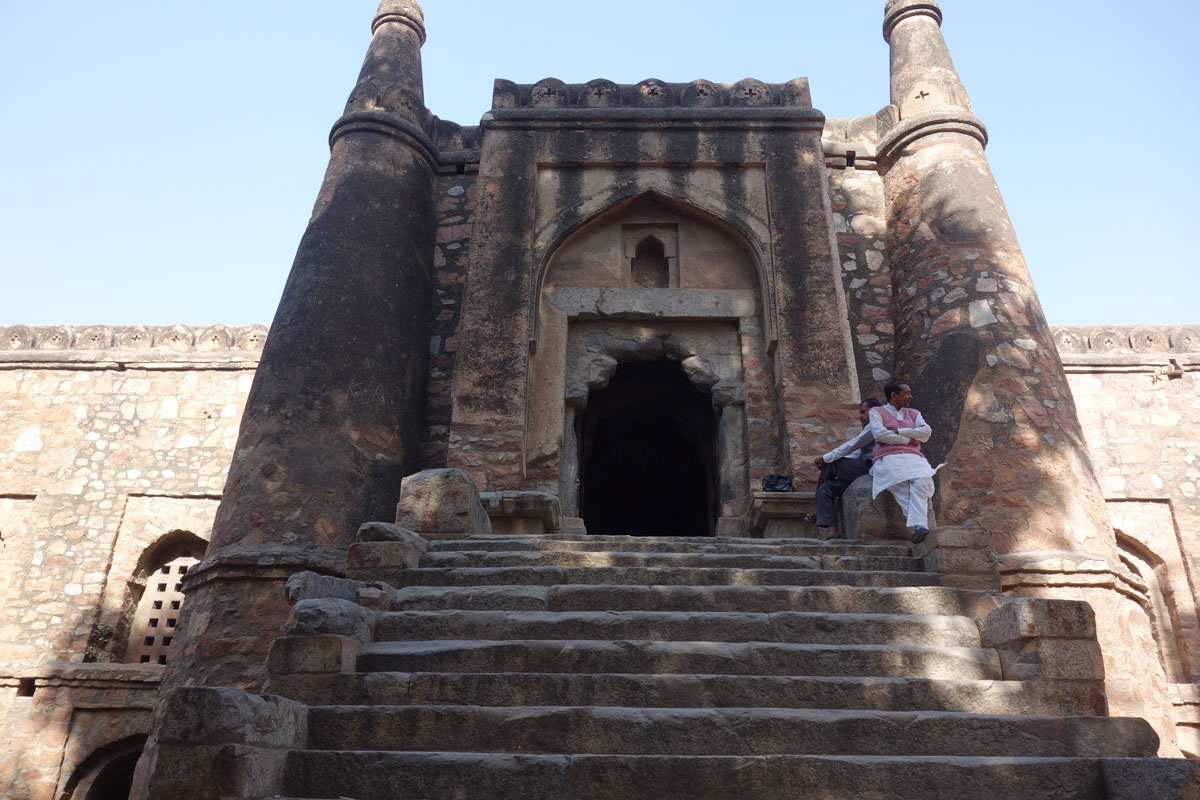 The Imposing Fort-Like Entrance to Khirkee Masjid Just around the Corner from Saket’s Malls
Few of us are aware that what we call Saket today – with its upmarket residential colonies and popular shopping malls – was many centuries ago a part of Muhammad Bin Tughlaq’s glittering new capital city of Jahanpanah. Unfortunately, not much of the old Jahanpanah survives in today’s Saket, but the parts that do remain are awe-inspiring. Saket reveals these hidden gems to us only grudgingly, but once you seek them out, you can enter a completely different world, where time has stood still, and the fairytale charm of medieval India still beckons.
When you cross the road from the Select City Mall to enter Khirkee village, you will have no idea what lies ahead. The lanes are dusty and filled with chaotic auto rickshaws. Ask for directions to Khirkee Masjid or Khirkee Qila as it is known, and after a few minutes of walking through the narrow lanes of the village, you will turn a corner to suddenly find the impressive Khirkee Masjid in front of you, surrounded by a protective fence. 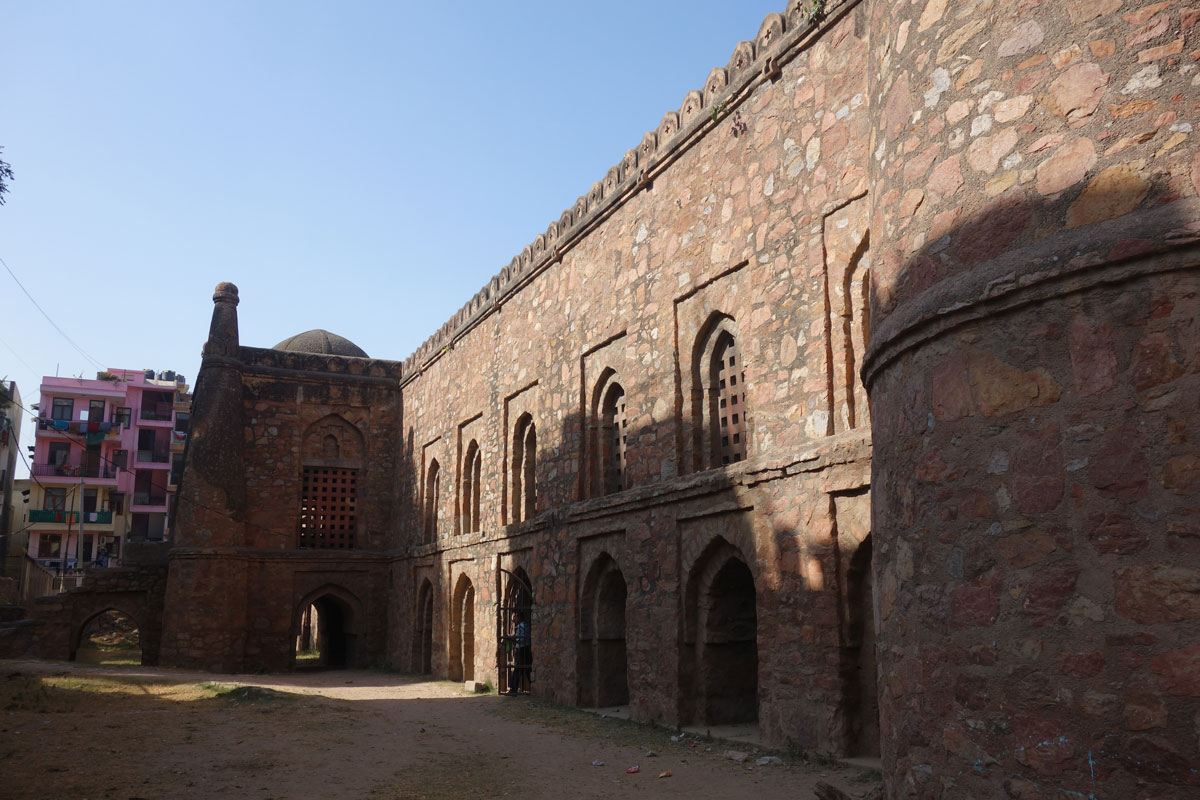 Khirkee Masjid’s Solid Walls and Bastions Typical of the Tughlaq Era
Khirkee Masjid is immediately intriguing. It has a commanding façade that looks more like a fort than a mosque. This is in fact entirely appropriate for the time when it was built, the 1350s when the Tughlaqs were ruling Delhi. This was a period of great insecurity, with constant and vicious Mongol raids on Delhi. Tughlaq architecture thus placed a big premium on such solid constructions; its purpose was to be useful rather than pretty, a structure that could be used to defend people during invasions.
As you climb the stairs of Khirkee Masjid’s impressive entrance, stop first to take a look at the main door. The pillars of the door arches are very clearly Hindu in style, with one slab of stone laid horizontally across two upright slabs to form the door. This is much more typical of entrances to Hindu temples than to mosques and reflects the intermingling of building styles that took root during the Sultanate period.
Once you step inside the Masjid, it is like entering a magical world. The thick walls do an excellent job of keeping out the heat and dust, with the interior being cool, dark and slightly moist. The famous khirkees (stone latticed jaali windows, from which the mosque gets it name), built at regular intervals along the walls let the sunlight stream in, which creates a wonderful dappled effect on the stone walls and floor, straight out of a photographers dream.
The overwhelming feeling one gets inside of Khirkee Masjid is one of a faultless balance. Pillars and arches stretch out on all sides, one behind the other in complete symmetry. The stonework, though bare of ornamentation, frugal and simple, is yet perfectly proportioned. 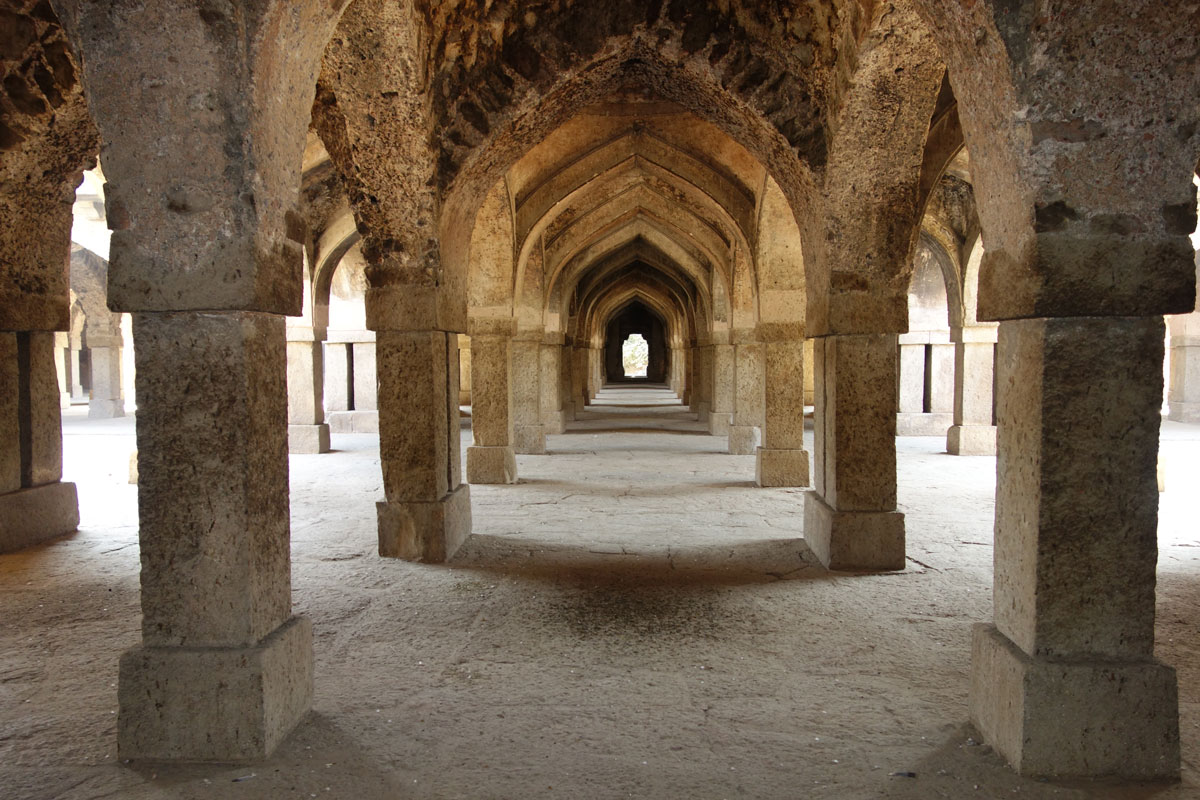 Inside the Khirkee Masjid, a Line of Symmetrical Pillars Stretching out on All Sides.
There are sections of the mosque that are dark and mysterious, contrasted with other areas that have open courtyards bathed in sunshine. The mood varies as you wander through. In the more dimly lit and dark areas, bats hang upturned in the nooks on the ceiling, their high pitched squeals reverberating off the walls. The atmosphere is slightly sinister and spooky. But, once you enter the brighter sections, sunshine warms your back, and preening pigeons strut along the ground, optimistically pecking for crumbs. 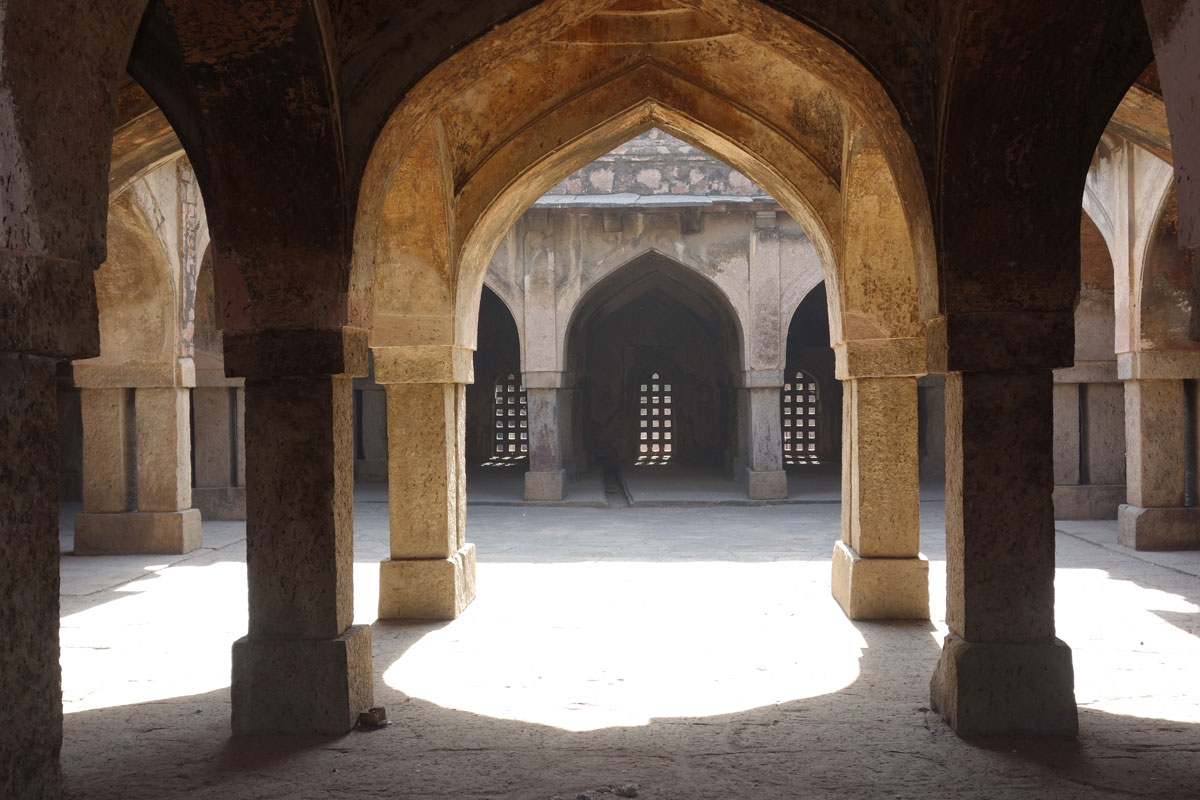 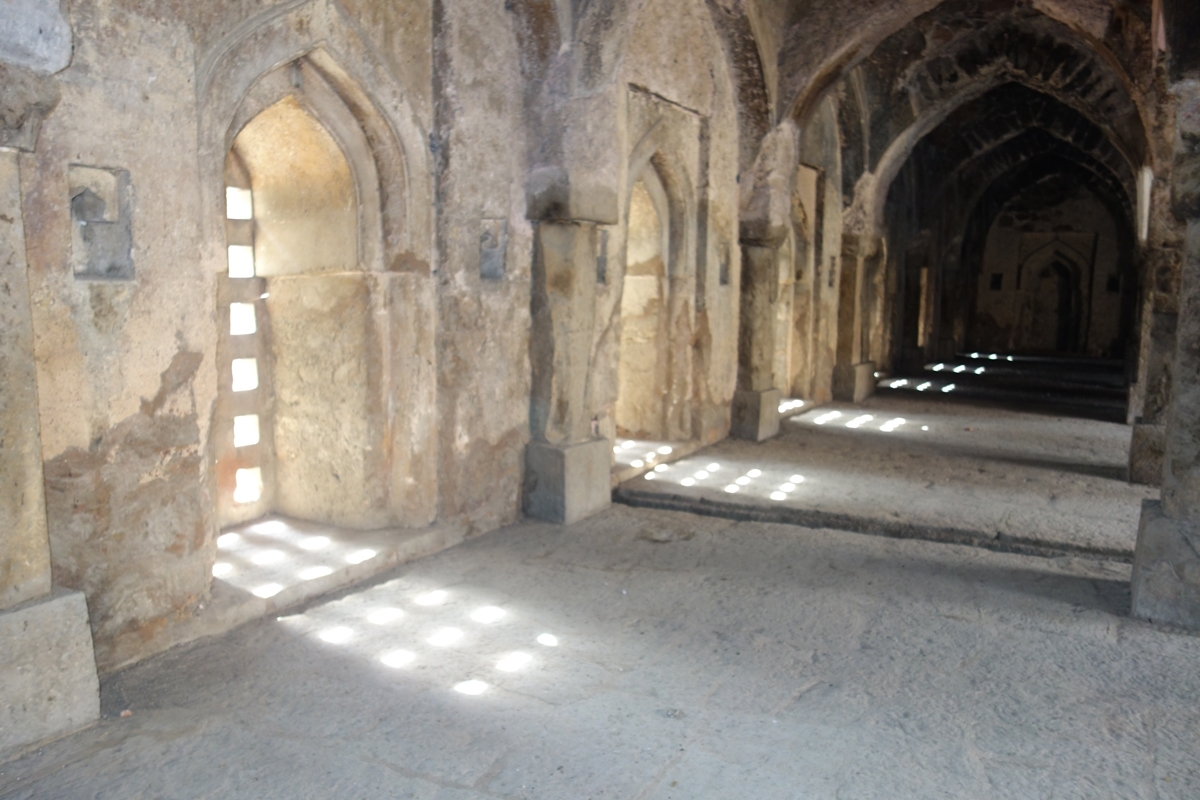 The famous jaali khirkees let the sunlight screen in
Perhaps unsurprisingly, one part of the mosque roof has collapsed in on itself. In a strange way, this adds to the enchanting atmosphere, but obviously, there is an urgent need for authorities to take restoration to hand. Within the mosque, there are also lessons of how NOT to restore monuments. If you look up at some of the restored arches, you will notice they are light pink in color and completely out of sync with the rest of the stonework. This was apparently due to the wrong mix of lime mortar used in restoration. Thankfully, when the authorities realized it was changing the character of the very mosque they were trying to restore, this was stopped. 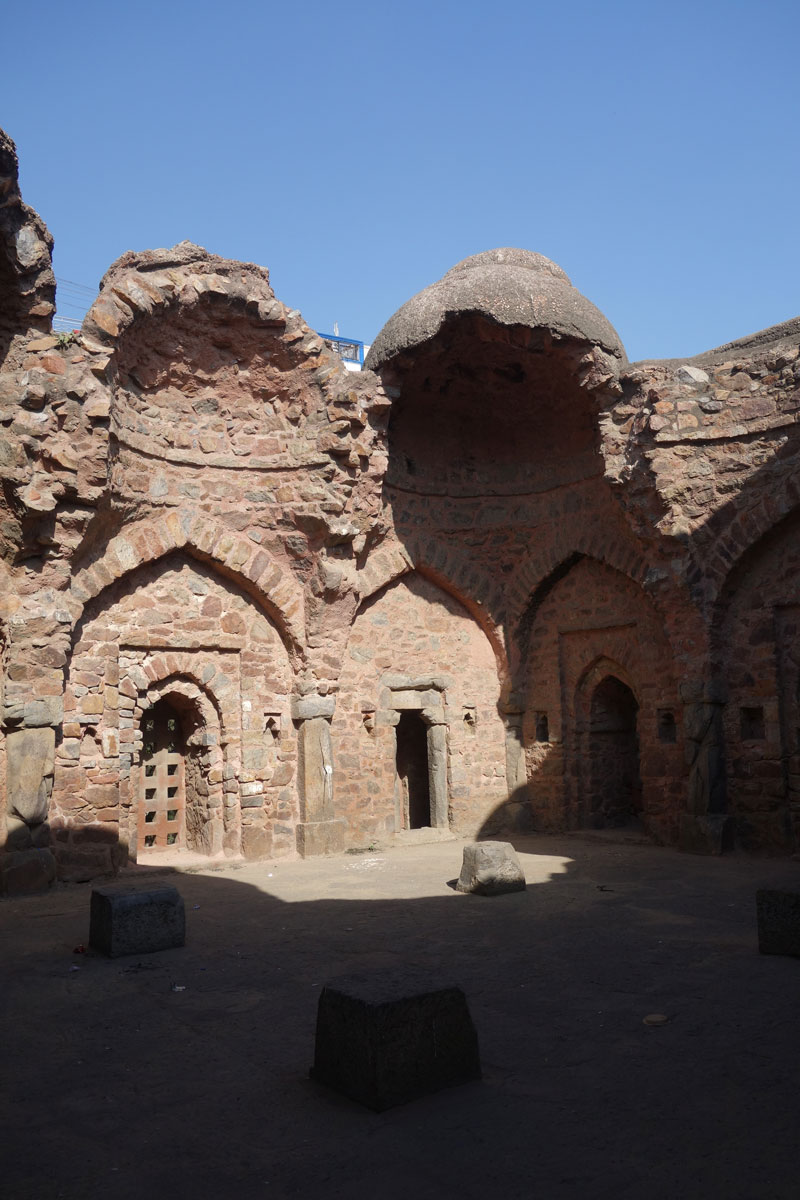 A Collapsed Portion of the Roof, Sadly Too Late for Restoration 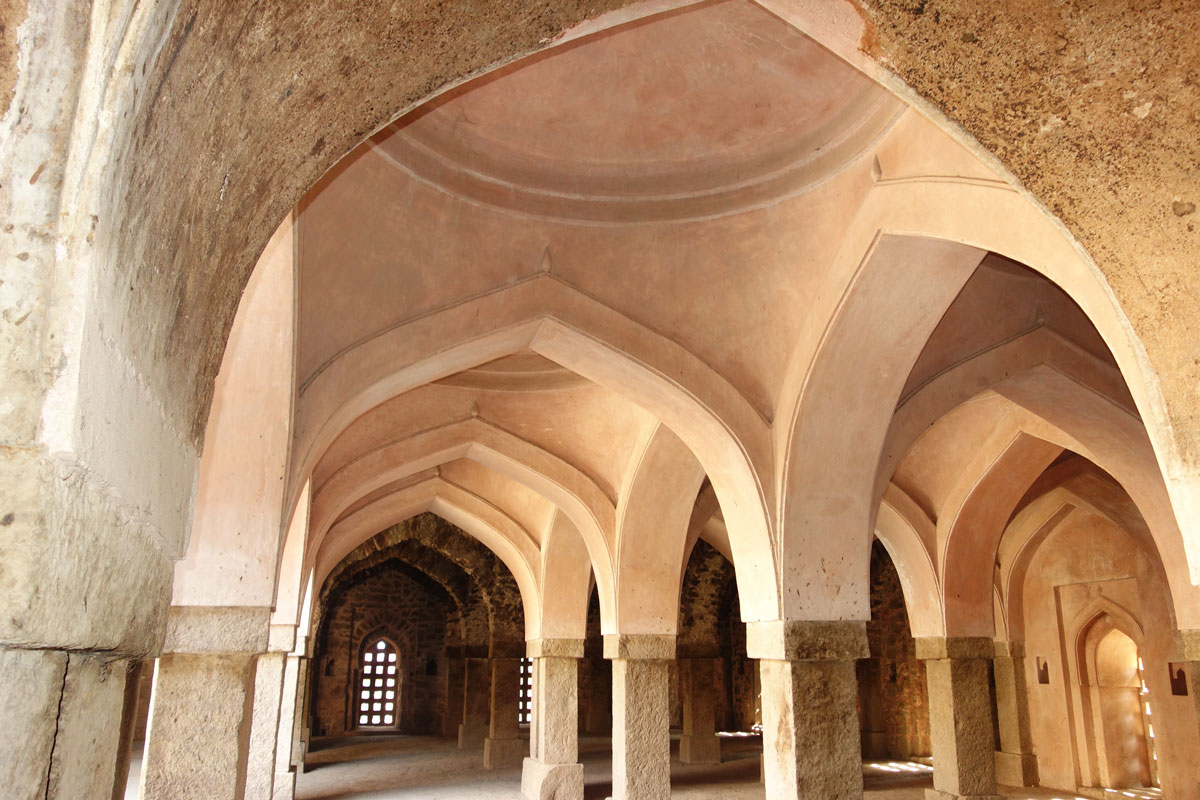 Pink Colored Lime Mortar Used for Restoration….and Then Thankfully Stopped
To one side of Khirkee Masjid is a set of steep stone stairs leading to the roof. On climbing these stairs, you will emerge on a terrace that is in every way just as magical as the interiors of the mosque you have left behind. A canopy of small, round domes flood the roof, huddled together in clusters like pigeons. 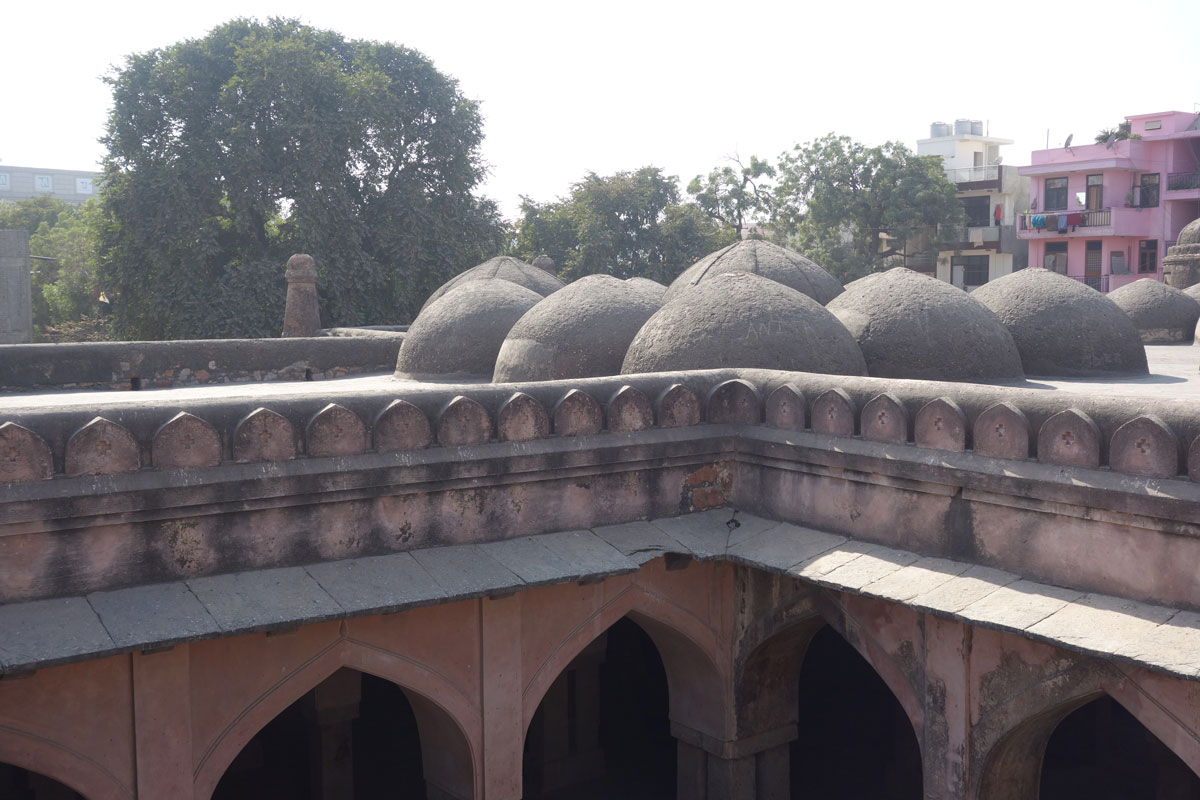 A Canopy of Eighty-One Small Domes on the Roof Clustered Together like Pigeons
It was early evening by the time I made my way to the roof. I sat on these ancient medieval domes, still warm to the touch, taking in the surroundings. No doubt, Feroz Shah Tughlaq and his wazir Junan Telangani would have prayed within the walls of this mosque. Would they too have come up to the roof after their prayers, sat on these domes, taking in the air? What weighty matters of state might they have talked about? Could Feroz Shah have sat on this very dome I am leaning on now?
As I relaxed on the roof of this Tughlaq period building, surrounded by the homes of today’s Khirkee village, I thought of all the everyday domesticity around me, people going about their business unmindful of this historic gem in their midst. I was grateful to Khirkee Masjid for opening to me a small window into Delhi’s amazing history. Such a world away from the Saket shopping malls around the corner.

The Builder of Khirkee Masjid

Khirkee Masjid was built by Junan Telengani, the wazir or prime minister of Sultan Feroz Shah Tughlaq. Though Feroz Shah himself has the high reputation of being a master builder (his creations Feroz Shah Kotla and Hauz Khas are still Delhi landmarks), Junan Telangani as his wazir was really no less.

Junan Telangani, – as the name suggests – was originally from Telangana in the south of India. His father was Yugandhar, the Hindu commander of Warangal Fort, who was defeated by the Tughlaqs in battle. After his defeat, Yugandhar joined forces with the Tughlaqs, came to Delhi and converted to Islam taking the name Maqbul Telangani.

Maqbul soon became Sultan Feroz Shah’s most trusted aide and his prime minister. Whenever Feroz Shah was away on long military campaigns, it was Maqbul Telangani who would handle the administration of Delhi. He became famously rich, and was said to have a “yearly income of thirteen lac tankhas apart from expenses for his army and servants and further allowances for his sons and sons-in-law”.

So close was Feroz Shah to Maqbul Telangani that he made the post of prime minister hereditary, and so the son Junan Telangani succeeding his father as wazir.

Feroz Shah and Junan Telangani were like kindred spirits. Both of them had mixed Hindu-Muslim upbringings (Feroz Shah’s mother was Bibi Nala, the Hindu princess of Dipalpur), and this blend certainly showed in their architecture.

The Mongols One-Sided Affair with Delhi

Throughout the reign of the Delhi Sultanate, especially in the 1200s and 1300s, Mongol raids on Delhi were a constant and menacing threat. The Mongols were not as much interested in the conquest of territories as in looting and plundering. In the words of the early medieval chronicler Juwaini, the “Mongols came, razed, burnt, slaughtered, plundered, and departed”. *

The Turks, who were the ruling elite of Delhi Sultanate, detested these Mongols with a vengeance. The famous medieval poet Amir Khusro writes, “…their eyes were so narrow and piercing that they might have bored a hole into a brass vessel, and their stench was more horrible than their colour. Their heads were set on their bodies as if they had no necks, and their cheeks resembled leathern bottles. Their noses extended from cheekbone to cheekbone…They devoured dogs and pigs with their nasty teeth…the King marveled at their beastly countenances and said that God had created them out of hellfire.” *

The one king who seemed to have the complete measure of the Mongols was Alauddin Khilji. He had decided that it was not enough to drive the Mongols back whenever they raided, but that strong deterrents were needed to be put in place. Alauddin created a system of frontier forts, secured by his best generals, and strengthened Delhi’s defenses. He routed the Mongols in several wars, slaughtering many and cementing their severed heads into the walls of his Siri Fort (some believe that is how Siri Fort got its name, “sir” being Hindustani for head). These strong-arm tactics of Alauddin deterred the Mongols temporarily, and “all fancy for coming to Hindustan was washed clean out of their breasts.”

But, the reprieve was not for long though. The most savage Mongol attack on Delhi was by Timur, who invaded the city in December 1398. Delhi was left in ruins, thousands of Delhi residents were killed and the Sultanate was brought to its knees. In the political chaos that followed, the Delhi Sultanate collapsed, and Babur seized the initiative to establish the Mughal Empire.

Opposite MGF Mall in Saket is a bus stand behind which is Khirkee village. You need to enter an alley to the right of the bus stand, and follow it until you reach the monument. Ask for directions to Khirkee Masjid or Khirkee Qila, as it is better known as.