21 Sep The Tomb of Sultan Garhi

Posted at 05:30h in Blogs, Delhi, Most-Read by India Heritage

The Oldest-Known Muslim Tomb in India

In the middle of Vasant Kunj’s smart residential compounds is a small scrub covered hill, where goats graze unhurriedly and little children gather firewood. On this secluded hill stands the atmospheric Sultan Garhi, the oldest-known Muslim tomb in India. It is a beautiful well-hidden gem, little known and little visited.

It took me some time to find Sultan Garhi, navigating through Vasant Kunj and its many markets. Though it is of high historical significance, there are no signposts to point the way. My auto driver was as clueless as I was, and after making many enquiries we were guided on to the kuccha road that leads to Sultan Garhi. I left the auto on the main road and walked up a mud track for about five minutes until I came upon the impressive Sultan Garhi, built like a small fort. 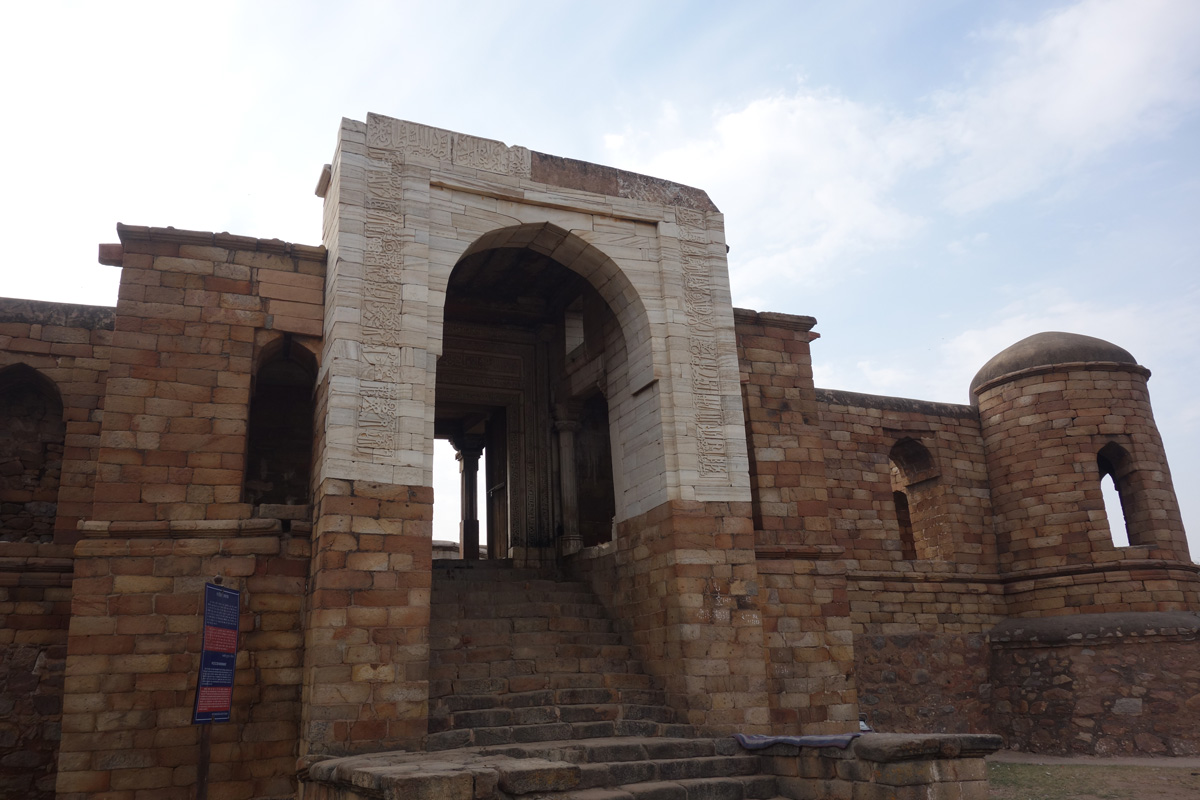 Sultan Ghari, Though a Tomb, Looks like a Small Fortress

Two cheerful caretakers were seated in a small ticket booth from where I bought my entry ticket for five rupees. Unlike most ASI protected sites, this is a ticketed monument, and the caretakers told me why; it is the result of a “Right to Information” complaint by a local student on ASI, which is responsible for its upkeep. Now, funds from the ticket sales are used for the structure’s maintenance and to help keep it clean.
Sultan Garhi was built in 1231, eight hundred years ago, which makes it the oldest-known Muslim tomb in India. It has the grave of Prince Nasiruddin Mahmud, who though not well known himself, was part of an illustrious family. Nasiruddin was the son of Iltutmish, the Sultan of Delhi for twenty six years and famous for having completed the Qutub Minar. And, he is also the elder brother of the celebrated Razia Sultan, the only woman ruler of the Sultanate and Mughal periods, who preceded the next woman ruler of India – Indira Gandhi – by seven centuries.
Prince Nasiruddin was killed in a battle in Bihar, and on his death, a grieving Iltutmish built this tomb in memory of his son. Little could Iltutmish have imagined that his son’s tomb would remain a revered local spot eight hundred years on. It is an active place of worship till today and is visited by local villagers, especially newlyweds, seeking blessings. Both Hindus and Muslims pray at the underground crypt where the grave is situated, a sign of Delhi’s composite culture built over the centuries.
As you enter the fort-like Sultan Garhi, the first thing that strikes you is the imposing double gateway. The gates have two layers, one behind the other, both having a façade of white marble carved with beautiful inscriptions. 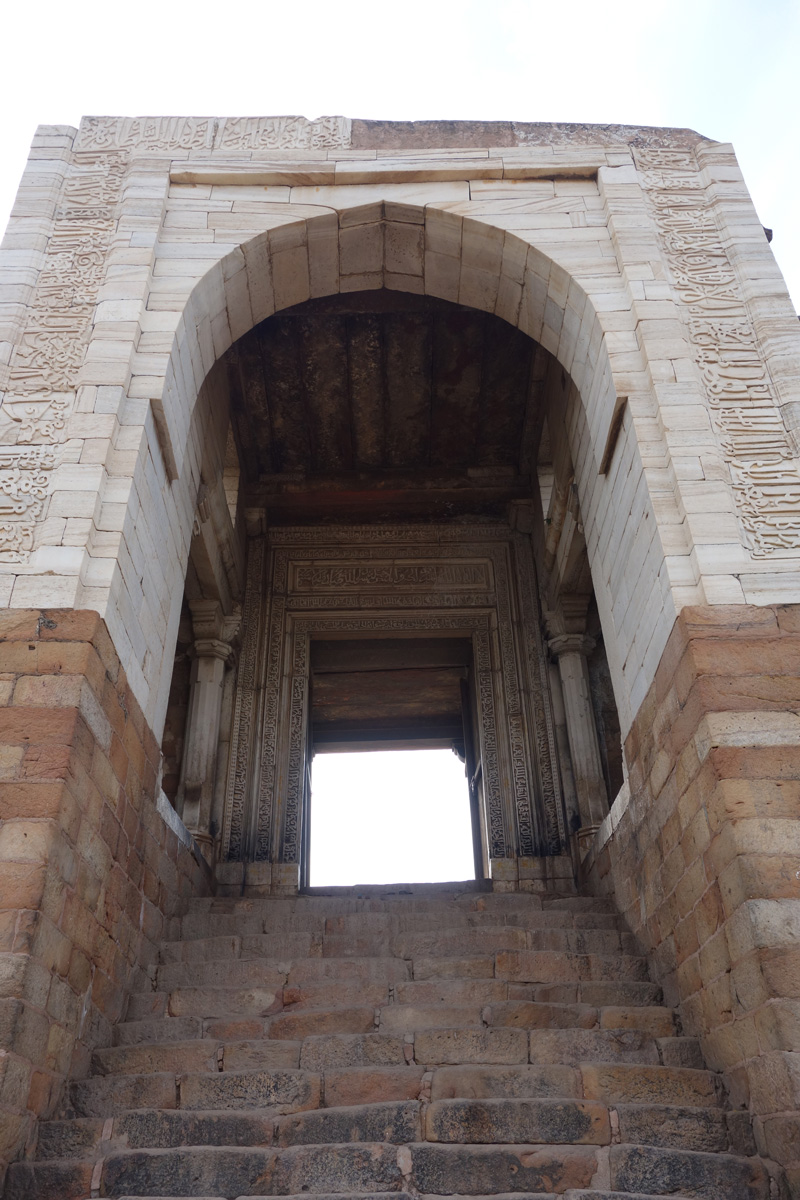 The Handsome Double Gateway of Sultan Ghari with Quranic Inscriptions Embellishing the Sides
On climbing the steep stairs through these impressive gates, one enters an internal patio with a raised octagonal slab at its center. The tomb of Nasiruddin lies below this structure. You can notice the original masonry that still survives along the rim of the octagonal slab, broken pieces of which are also placed at the corners of this peaceful courtyard. There are clearly two different styles of carving, a combination of Hindu and Islamic styles. Some of these designs are floral, decorated with ornate plants and leaves so characteristic of the Hindu designs used on temple walls and pillars. The other carvings are of a more formal Islamic style, with the use of circles and triangles and geometric patterns. 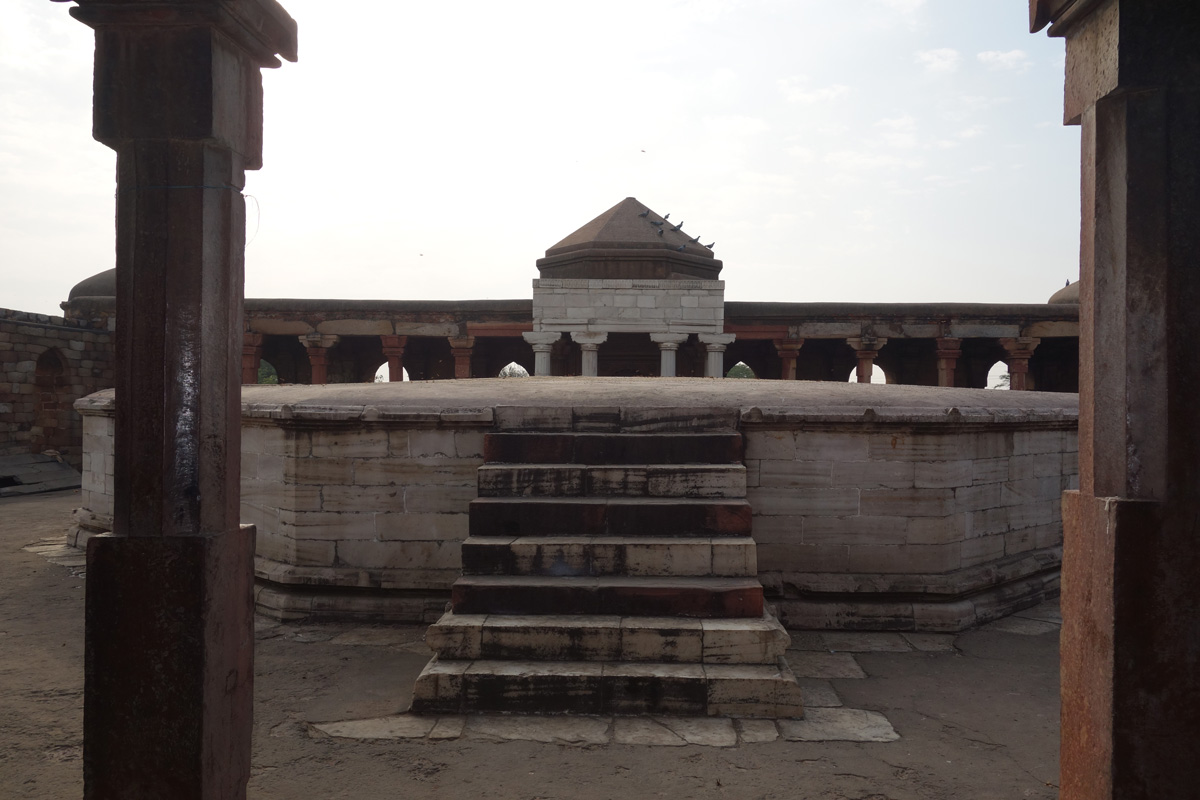 The Peaceful Inner Courtyard with a Raised Slab below Which Lies Nasiruddin’s crypt
This mixing of fashions is characteristic of the early Sultanate period to which this building belongs. The Turkic Sultans who built these monuments bought with them their own Islamic building styles. But, they relied for construction on the local Hindu artisans who were interpreting them in their own way.

Typical Hindu Naturalistic Style Carvings in the Ornamental Masonry
Within this small courtyard, there is further evidence of the unique intermingling of styles. Look at the stone pillars that surround the quad, and you will notice their unmistakable resemblance to temple pillars – square cut and topped by lotus-shaped columns. These are typical of pillars one finds in Hindu temples across India. 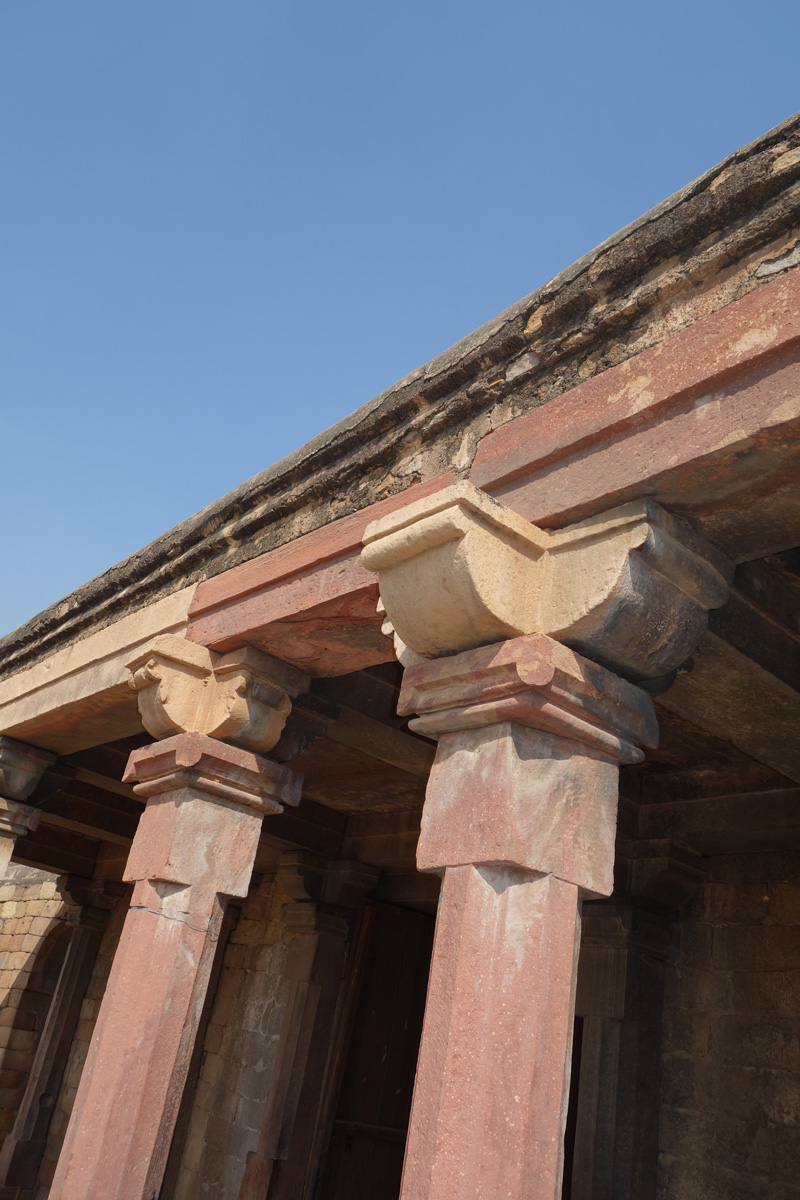 Walking around the perimeter of the courtyard to the far western wall, you will find the most beautiful mihrab made of white marble, its walls intricately carved with Quranic scriptures. Mihrabs are semicircular niches in the walls of mosques that indicate the direction of Mecca for prayer. Though mihrabs are normal features in mosques, they also came to be commonly used in Muslim tombs during the Sultanate and Mughal periods. 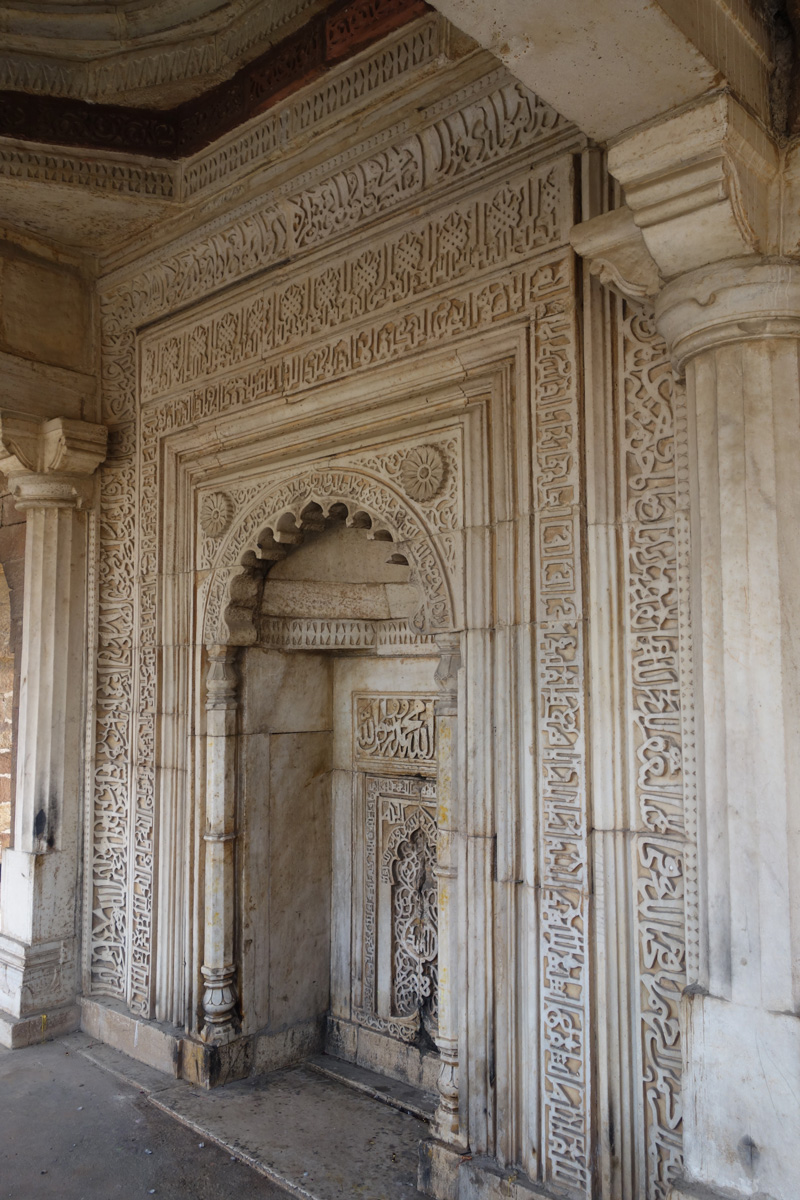 The Lovely White Marble Mihrab, on the Western Wall of Sultan Garhi
Curious to see the view from the top, I climbed a steep flight of stairs to the roof of Sultan Garhi. The main structure is surrounded by scrub forest and a host of atmospheric smaller ruins – tombs, old serais and what looked like medieval stables. It was peaceful up there to share space with a flock of pigeons that occupied one of the main domes. I could hear the caretakers chatting in the distance, along with the cooing of the pigeons and the occasional car horn. These were the only noises to remind me that I was actually in the middle of a city. 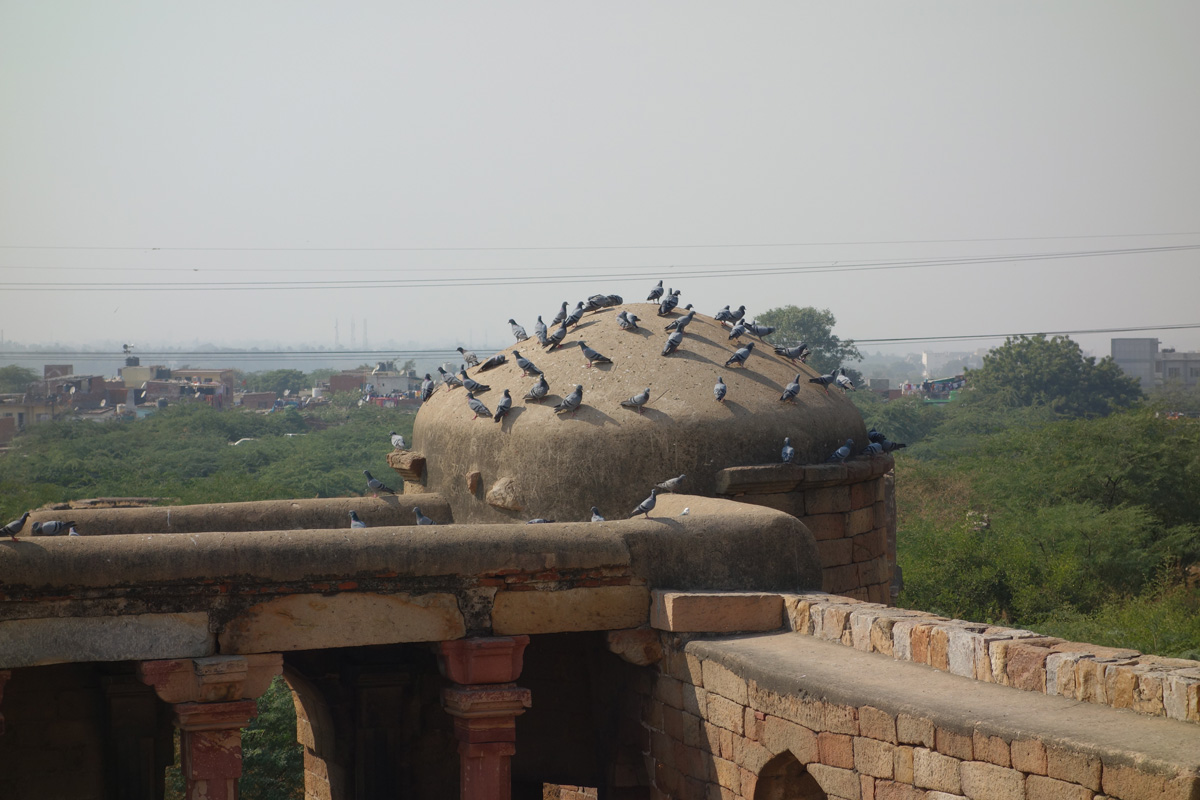 On the Parapet of Sultan Garhi: Peaceful and Quiet
I was now ready to visit the underground grave-chamber of Nasiruddin Mahmud. The raised slab that dominates the central patio is built over a garhi (cave), inside which is the crypt. The entrance is through an ancient wooden door, normally kept open to encourage worshippers. I took off my shoes, ignored the ever-present wasps and entered the door to descend about ten steep steps. I had to be careful, my eyes taking time to adjust to the darkness of the cave after the bright sunshine outside.
The air within the garhi was musty and stuffy, and it crackled with character. The small door at the head of the stairs let in a thin stream of sunlight that barely illuminated the interiors. Inside the cave are three tombs, each covered with a chaadar, with a candle burning at the head. The tallest of these tombs is Prince Nasiruddin Mahmud’s. The other graves are not identified and probably belong to family members. 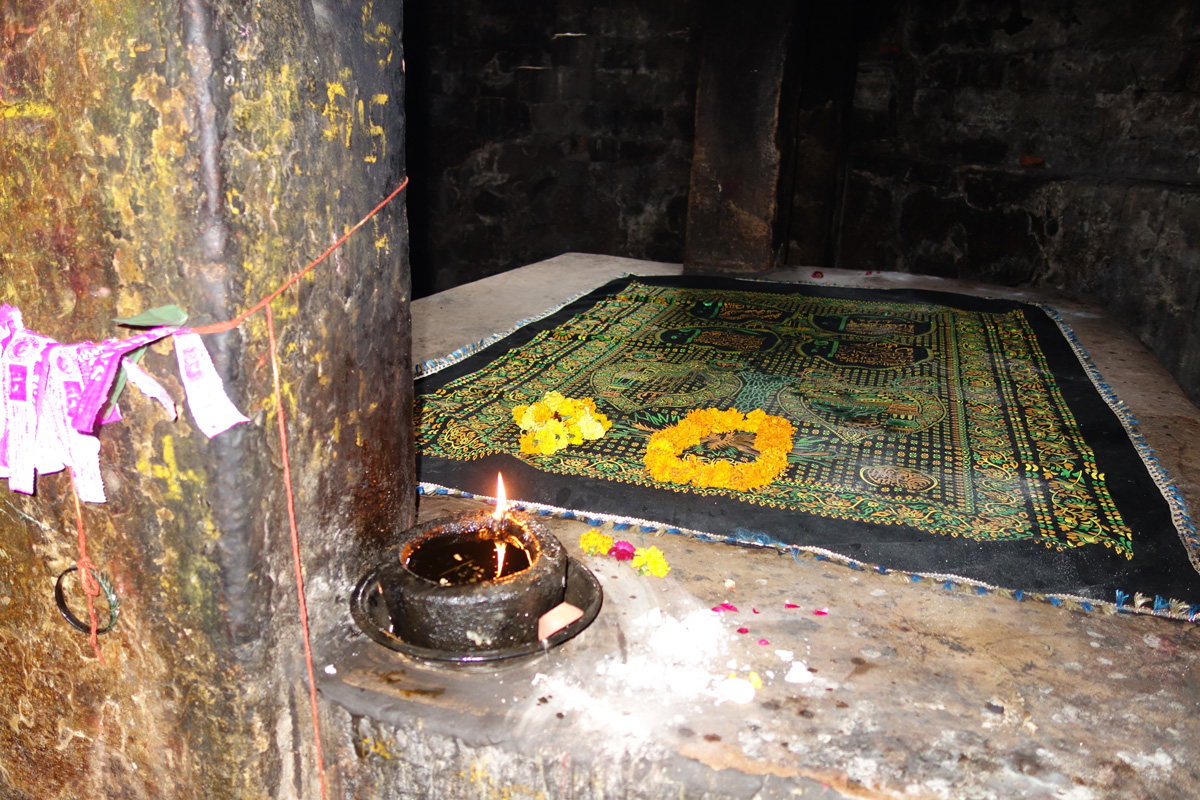 A Candle Stands Vigil at the Tomb of Nasiruddin
I was mesmerized by the trance-like and spiritual atmosphere inside this small cave and spent many magical minutes sitting beside the ancient graves. Just me, the mute flickering diyas, a thin line of smoke rising from the candles, and silence. Along with the soul of Prince Nasiruddin, martyred in battle.
The atmosphere was so thick with mystery and magic that I could literally reach out and touch the aura of a bygone era; of giant kings, clashing swords, the ambition of empire building and greed. 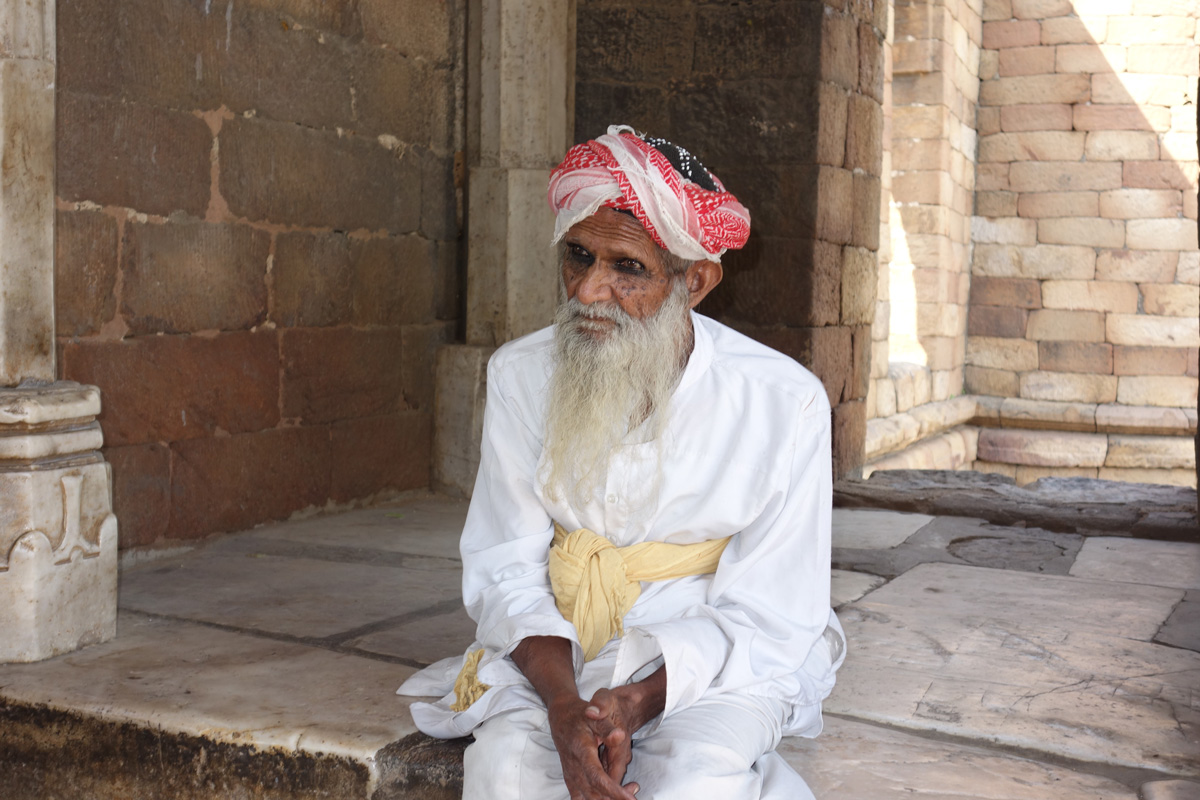 An Old Baba at Sultan Garhi Who Had Come to Pay His Respects.

The Chattris outside Sultan Garhi

The chattri (cenotaph) one sees outside Sultan Garhi is the tomb of another of Iltutmish’s sons. We know that apart from Nasiruddin, two more sons, Ruknuddin Feroze Shah (died 1237 AD) and Muizzudin Bahram Shah (killed in 1241 AD) were also buried under nearby chattris. One of the two chattris is restored, which is the one you see; the other has been destroyed.

The Story of the Ticket Booth

When you buy your entry tickets from the booth outside, spare a thought for the caretakers, who remain ever-cheerful despite their troubles…
Because Sultan Garhi is a mazaar and revered by local villagers, they have responsibilities beyond just the sale of occasional tickets. On Fridays, the locals set up stalls here selling chaadars and diyas that are used as offerings. This adds to the pollution inside the small underground crypt and hinders its upkeep. It is the caretakers who have the task of removing and storing the chaadars and cleaning up after. And, they also have the thankless job of facing angry villagers if they dare to ask them for tickets.

Sultan Gadhi is in Vasant Kunj, on the Mehrauli-Mahipalpur Road. Look for the Ryan International School, and more or less opposite the school, you will see a yellow police check post. Enter the dirt track beside the police post (you can walk or drive, though it may be a rough ride). After hundred meters, the track divides. Take the right fork. In another 300 meters you will find Sultan Garhi in front to you.