Posted at 18:08h in Blogs, Travelling and Exploring India by India Heritage

The Hooghly has always been Kolkata’s working river. It connects the city to the world, brings in commerce and prosperity, and shapes its culture and heritage. And the timeless ghats that dot the Hooghly riverfront are the landing posts for this watery highway, witnessing all of Kolkata’s historical journey from the start.
There were once over a hundred ghats in the city, built by rich zamindars and rulers over the centuries. Many have been abandoned or simply disappeared over time, and there are 42 ghats still active today. These are used for all manner of things; for bathing, fetching water, swimming, religious events, festivals, loading and unloading of goods, getting on and off boats… 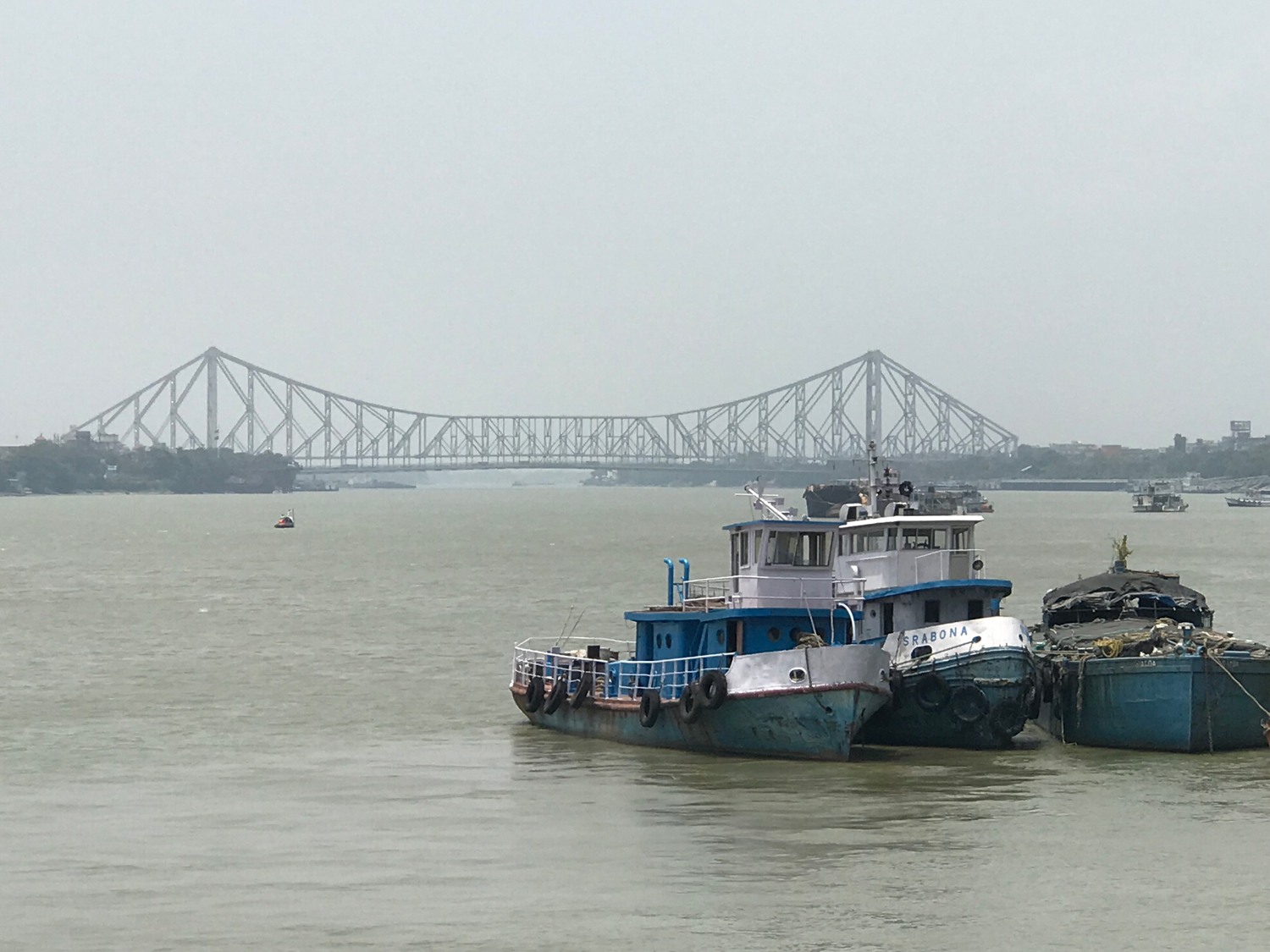 A story in every corner; from Prinsep to Chandpal

It is easy to be confused about which ghats to visit, there being so many different heritage ghats to choose from. So, i decided to walk the stretch from the iconic white columns of Prinsep ghat, along the scenic riverfront to the much-storied Chandpal ghat. The distance was just two kilometers, but it gave a unique perspective on the city, full of alluring sights and sounds; of people watching, river watching, chatting at chai-stalls and ferry ticket offices, visiting shrines under ancient trees, taking my first boat ride on the Hooghly. There was a new discovery in every corner.

The genius of James Prinsep, and his contributions to India’s history

Few Kolkatans know that James Prinsep was the man who successfully deciphered the previously unreadable Brahmi script, and in doing so re-connected us with the history of the great Emperor Ashoka.
The Prinsep family had a strong connection with Kolkata. It was John Prinsep – James’ father – who had first set foot in the city. He describes his wide-eyed arrival…“the stream seemed to widen as we proceeded and straight before us we beheld a stately forest of masts, vessels, an immense city and all the bustle of commercial enterprise…. a few minutes after this magic scene had dazzled our eyes, I landed with my baggage at the Custom House…with ten guineas I had borrowed from my friend to bear my expenses.”*
The man who landed in Kolkata with a debt of ten guineas in his pocket, spent 17 years here amassing wealth and returned to England with a fortune worth £40,000. During his stay in Kolkata, John Prinsep introduced indigo cultivation to Bengal, pioneered the replacement of cowries with copper coins, bought four houses in the city, and at the age of 36, married Sophia Auriol, the sister of the Government’s Chief Secretary. 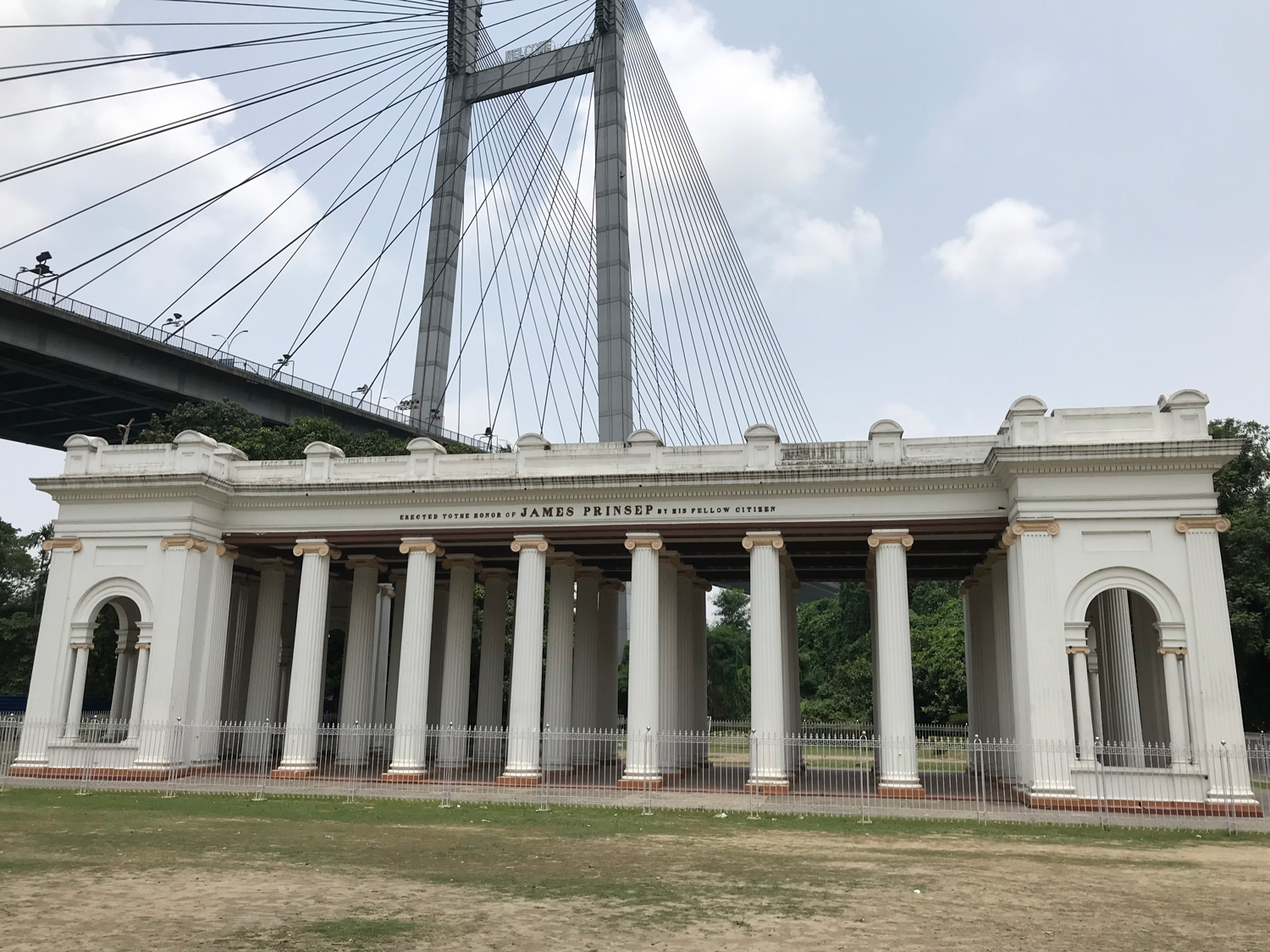 Prinsep Ghat sits elegantly beside the towering Vidyasagar Setu bridge
Though John Prinsep returned to his fatherland, he would send to Kolkata five of his sons and grandsons to make names for themselves, among them James Prinsep.
James had initially studied architecture in England, before joining the Royal Mint in London as an assay-master, or the officer who tests the weight and fineness of coins and bullion. In 1819, he was offered a position at the Calcutta Mint, and so landed at Chandpal ghat on September 15, 1819, to join his other brothers who were already employed here by the East India Company.
James spent 20-odd years in India, dividing time equally between Kolkata and Benares (Varanasi). He accomplished much in both cities. At Benares, James erected a new mint, built the St Mary’s church and Karmnasa bridge, designed the city’s drainage system, and surveyed and printed Benares’s most accurate map. And in Kolkata, he published the first journals of the fledging Asiatic Society, and in his most defining accomplishment, deciphered the Brahmi script; identifying inscriptions on the rock edicts and pillars scattered across India, thus bringing alive the history of Ashoka the Great, which had been lost to the world.
Unfortunately, this pace of work took its toll on James, who began suffering from headaches and sickness which was linked to a brain condition. James was forced to resign his job and go back to England to recover, where, “exhausted by incessant intellectual toil”, he died in 1840, at the young age of 40.
In Kolkata, his colleagues decided to build “a spacious and handsome ghat” in his memory, “…that will unite, as he did in everything he undertook, what is most beautiful and engaging with what is most useful”.
When the Prinsep ghat was built in 1841, it was at the entrance to the city, “…the first object that will strike the eyes of those who come from distant lands”*. Today, it stands within a well-maintained lawn and fenced enclosure, surrounded by a busy road and rail track and dwarfed by the massive Vidyasagar Setu, the world’s six longest cable-bridge, just behind it. Perhaps James Prinsep, a man known to delight in construction and technology, would have approved.

A nouka ride on the placid Hooghly, with an unforthcoming Biplab Biswas

I walked past the Palladian-style pillars of Prinsep ghat and towards the swollen Hooghly, where country boats bobbed colorfully while their boatmen splashed about in the river, cooling off from the sun. 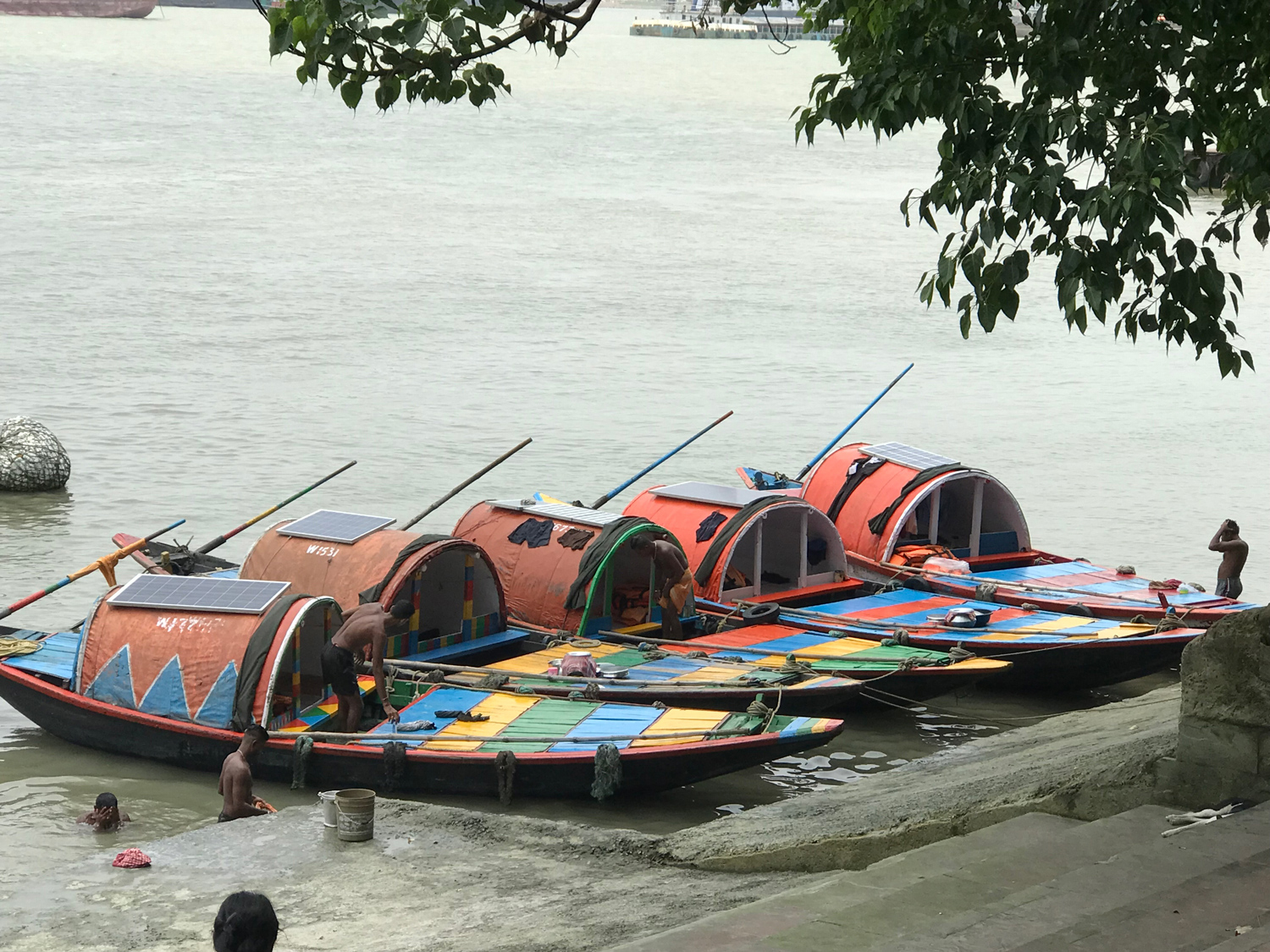 colorful noukas at Prinsep ghat await their Hooghly passengers
I asked for the cost of a nouka-ride and was quoted 400 rupees. Clambering on to the boat of Biplab Biswas, we made for the open river and my first boat ride on the Hooghly.
Vidyasagar Setu’s giant steel frame loomed ahead of us, and further upstream the famous arches of Howrah Bridge. There was not a hint of breeze on the river, with the air being so still that we could hear the announcements from Prinsep ghat station drift across to us. It did not take me long to understand that rowing down the Hooghly was a hot and sweaty business….no wonder Biplab and his mates were all bare bodied. 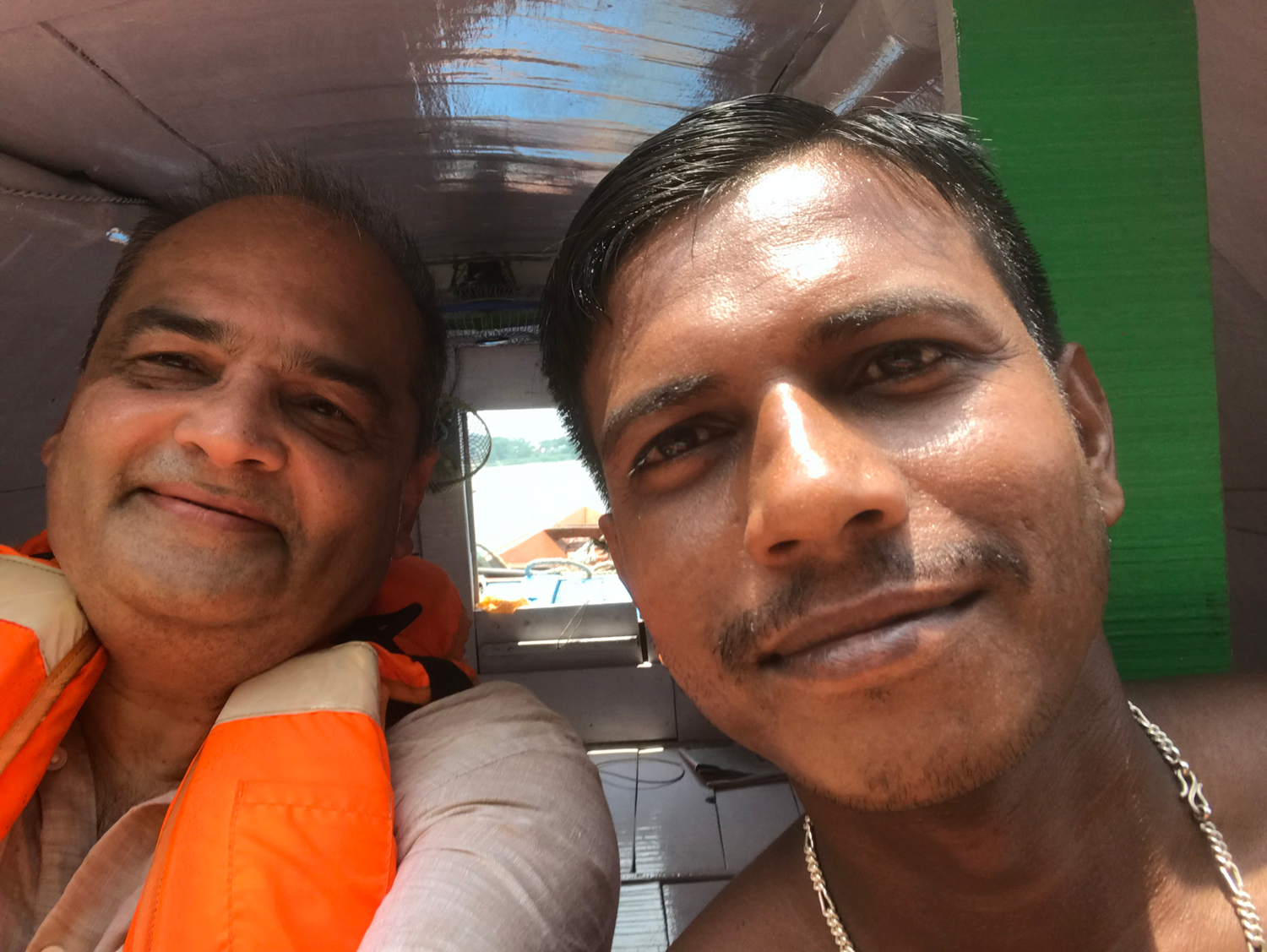 Biplab and me; selfie on the Hooghly with the largely-silent Biplab
The noukas are not designed for easy communication. While the passengers sit at the front of the boat looking forwards, the boat is steered from the back, with the boatman facing the other way. And on top of that, Biplab was clearly what PG Wodehouse would have referred to as a “reticent communicator”.
But still, my many questions did get me insights on the life of a nouka-boatman; that they were generally hereditary fishermen, would make 3 to 4 boat rides a day with customers seeking river-rides or with families immersing ashes of departed relatives, that they would supplement their income by fishing for the sought-after Hilsa (Ilish) fish; though this was seasonal business as the sea-living Hilsa swims upriver to breed only between July and September, during the monsoon.

The sights and sounds of a riverfront walk

Back on shore, I started the walk upriver towards Chandpal ghat. The vast Hooghly was to my left, with a single-line of rail track to my right, beyond which was the broad Strand road. Occasionally a local train rumbled past on the tracks, the passengers standing at the open doorways taking in the breeze and the scenes of the river. 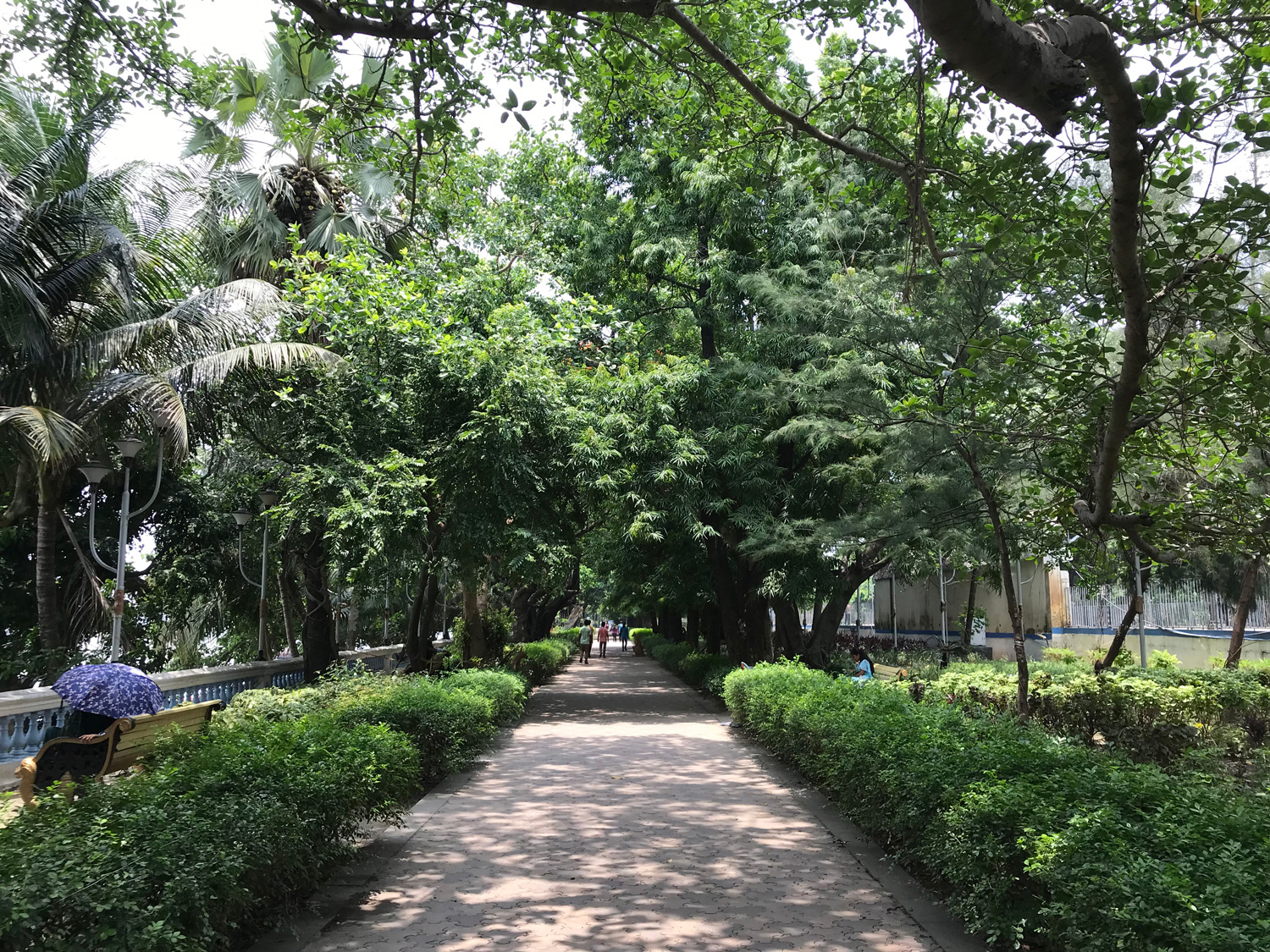 The Hooghly riverfront is canopied by greenery; perfect for a stroll from one ghat to another
This walk was pure pleasure. Ancient trees provided a leafy canopy, below which sat young couples or groups of friends, taking in the ebb and flow of the Hooghly, its waves gently lapping the muddy shore, with ships anchored lazily in midstream.
I walked past Judges ghat (built by the wonderfully-named Sir Elijah Impey, the first Chief Justice of Kolkata’s Supreme Court and a close friend of Warren Hastings), then Outram ghat (named after James Outram, an East India Company soldier who played a major role in the 1857 uprising), and Babu ghat, which has done away with the traditional ghat steps to have a sloping platform instead, easier for the immersion of idols during pujas.
I passed the Gwalior Monument, nicknamed Pepper Pot due to its shape, one of Kolkata’s lesser-known colonial structures built by the East India Company in 1847 as a war memorial. Past the Sea Explorers Institute, proudly displaying courses on “disaster management, seamanship, marine awareness”, by the River Traffic Police offices, that had signs for a “public allowed” mess, from which food smells wafted through the air, a plate of chicken chowmein advertised for Rs 80.
And then on to Scoops Ice Cream parlour, formerly “Gay Restaurant” from the 1970s, which has been responsible for memories of many family outings over tutti-frutti ice cream. I stopped at some of the small shrines and mandirs that dot the riverfront, having milky-sweet chai served to me in earthen khullars the old-fashioned way, 10 rupees for a small cup and 15 rupees for a large one. And then, in front of me, was my destination Chandpal ghat. 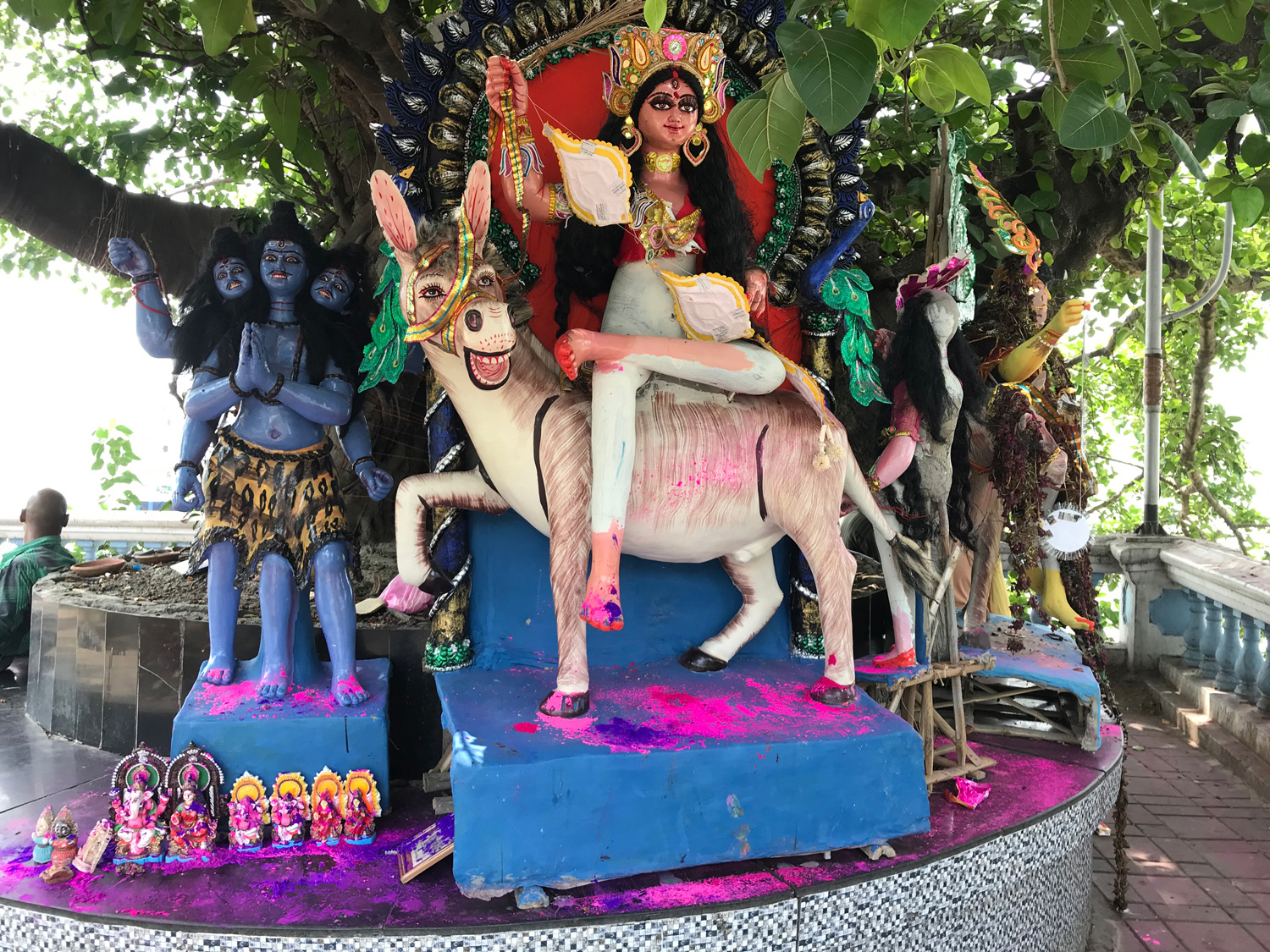 Named after a small shopkeeper of the ghat, Chandpal ghat was once the busiest ferry ghat of Kolkata. In fact, it still has a regular ferry service and an active jetty.
This was where Englishmen often put their first steps on Indian soil. As Kolkata’s prominence rose, so did the buzz and activity at this ghat, making it the principal landing ground for East India Company traders and British government officials. A string of dignitaries disembarked here after long sea journeys from London; Sir Phillip Frances, member of the supreme council of Bengal, in 1774; Lord Cornwallis, the first Governor general of India, in 1786; James Prinsep, of Prinsep ghat fame, in 1819.
Fanny Parkes, who’s high spirited Indian adventures so scandalized British society, first set foot at Chandpal ghat on the chilly morning of November 10, 1822, after her five-month sea voyage from England. I had read her book “Wanderings of a pilgrim in search of the picturesque” and researched her story, even visiting her London grave – which coincidently is in the same cemetery as Dwarkanath Tagore, who’s parties she’d attended in Kolkata. For Fanny, stepping foot in Kolkata was love at first sight. She would live on Chowringhee, gallop her Arab stallion on the maidan, attend dinner balls with “Nawabs, Rajahs, Mahrattas, Greeks, Turks, Armenians, Mussalmans, and Hindoos”.
A modern steel walkway now connects Chandpal ghat to the jetty. When I visited, a ferry was just leaving shore for Ramkrishnapur on the opposite bank. Passengers made a dash for the small ticket office, rupees six to cross the river. 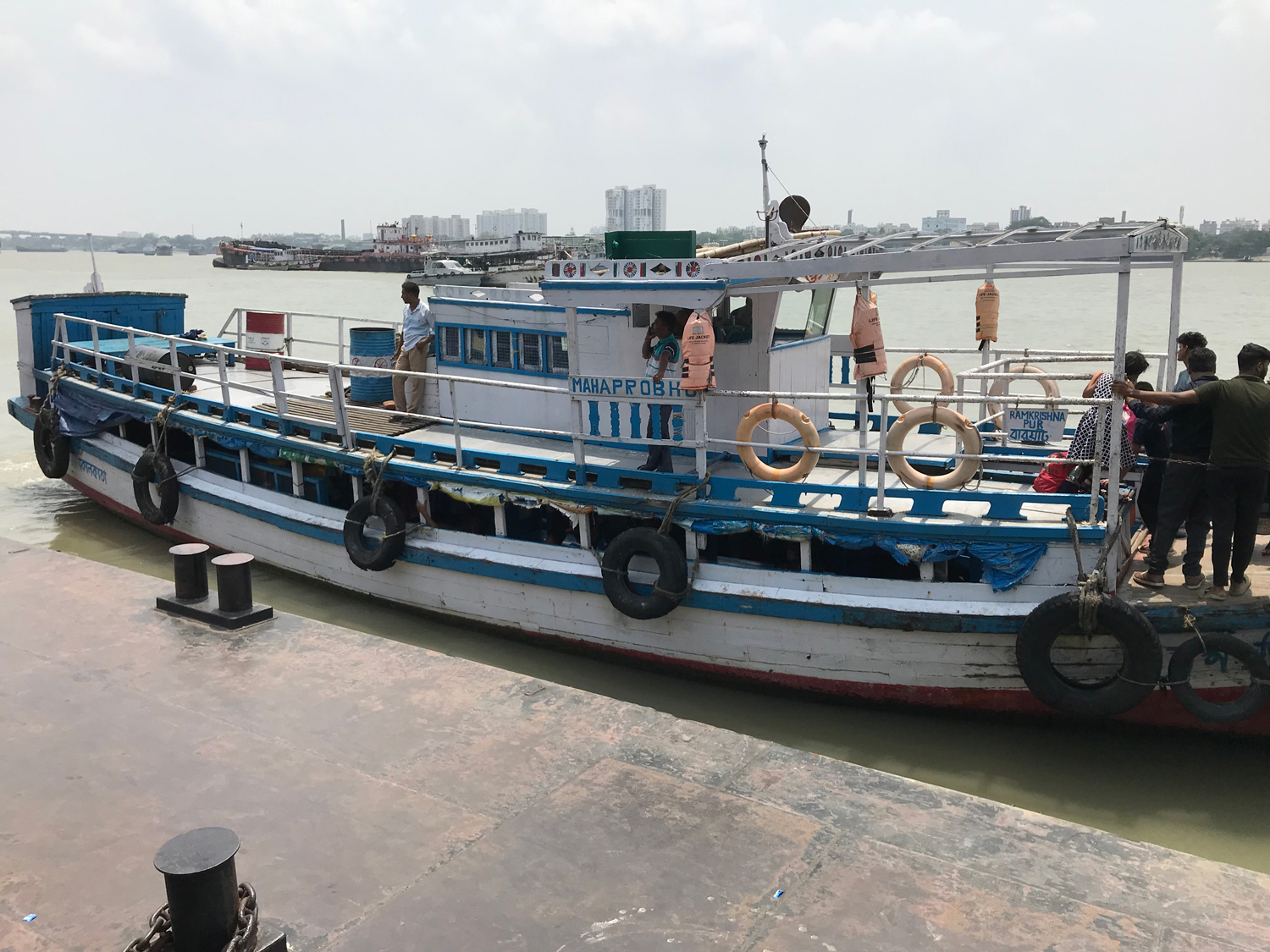 Hopping aboard Chandpal’s ferry…
I walked down the gangplank to the river’s edge, trying to imagine an Englishman (or woman’s) view of India as they stepped ashore for the first time. I now could understand why Chandpal ghat became the favored landing ground; the river slopes away on both sides, with the ghat located on the cusp of a gentle U-shape for the Hooghly. Using any of the ghats further upstream would enter crowded Kolkata. Landing at Chandpal avoided that, being close to the main city but yet not in the thick of it. 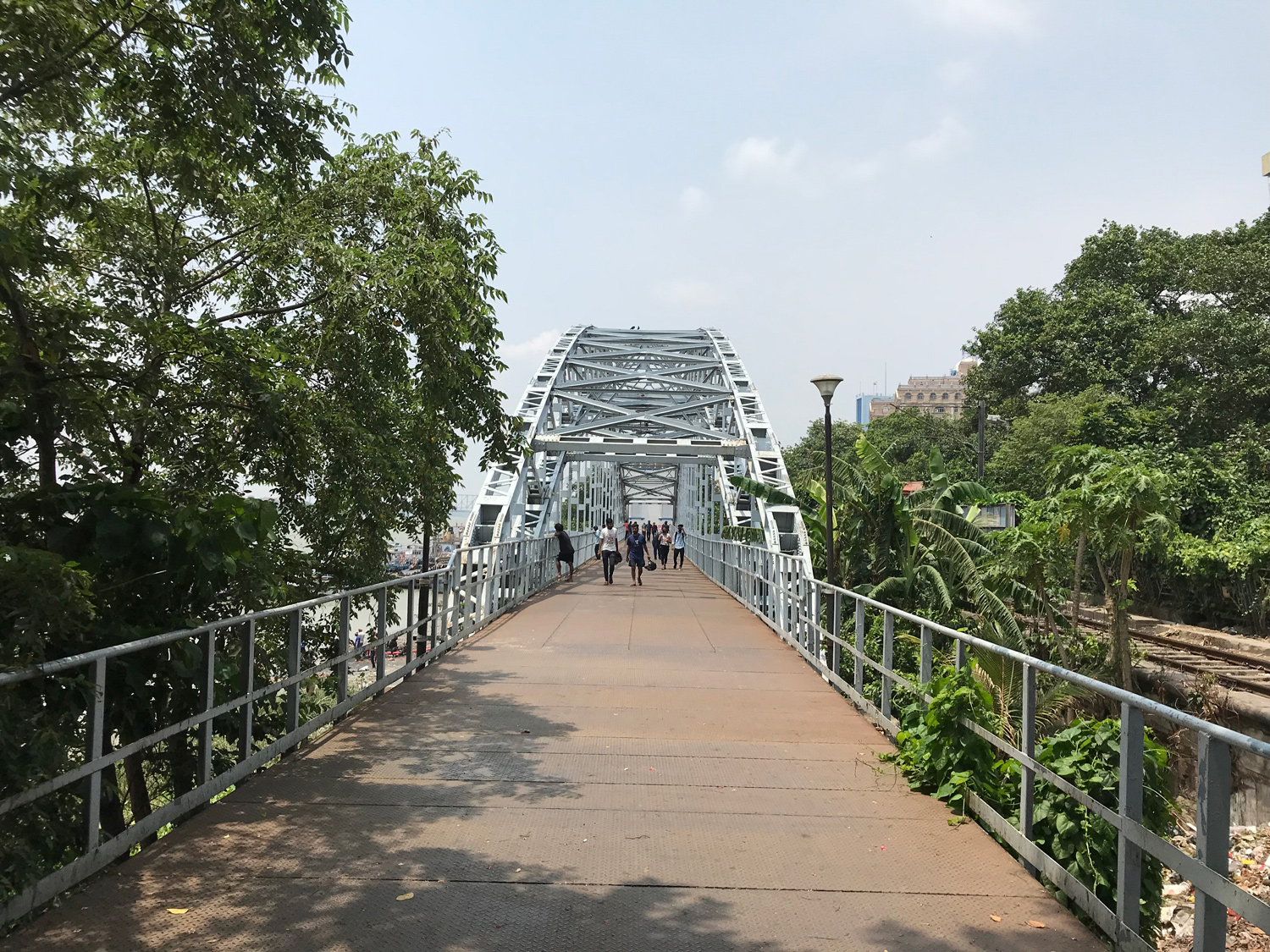 All modern and steel now; not what Lord Cornwallis or Fanny Parkes would have seen

Can’t “ghat” enough; a big thumbs up for the authorities

What a well-spent morning, with interesting stories and sights in every nook and corner, and not a minute of boredom.
What had made this walk even more agreeable was the beautifully maintained river-side path; neat, clean and hassle-free, with a lovely green canopy of trees for shade and a pleasing breeze accompanying the gentle lapping of waves on shore. History has always been my passion, but this charming walk had turned me part-poetic. Three cheers for the authorities.
* “James Prinsep : Life and Work” by P. Thankappan Nair (chapter1, pg53, pg84)
Sources: