Posted at 12:09h in Blogs, Delhi by India Heritage

Two heritage mosques and a timeless Mazhar, which are little known and difficult to visit

Close to the Vasant Vihar Club and opposite the prestigious Shri Ram School is a well-preserved stone pathway that leads up a rocky hill. This is Muradabad Pahadi, named after a little-known spiritual leader Baba Murad Ali Shah who lived and practiced here centuries ago. 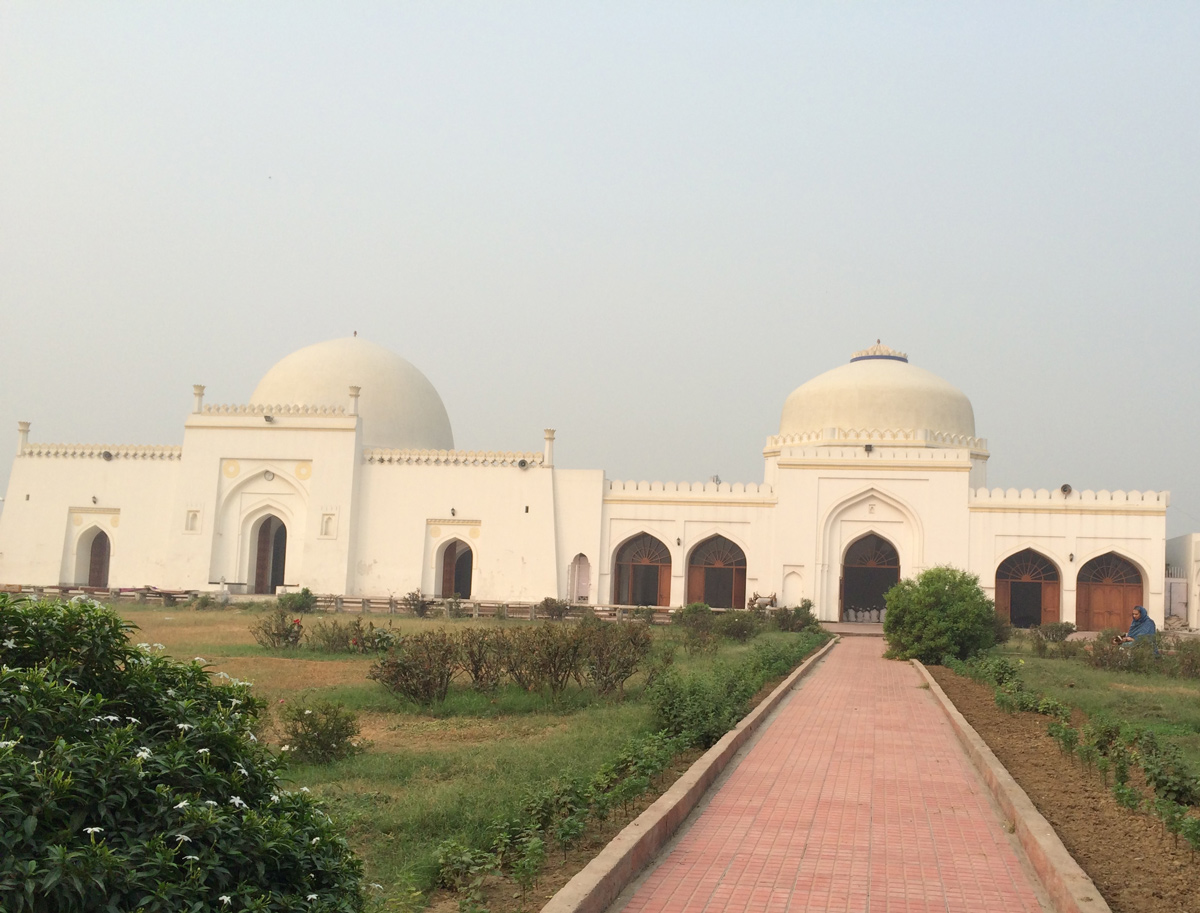 A Tughlaq Era and a Lodi Era Mosque Side By Side at Muradabad Pahadi: This Is Unique In Delhi

At the top of this hill – when one can get access to it – is Baba Murad’s ancient Mazhar along with two imposing mosques that are in several ways unique. These Tughlaq and Lodi era mosques, today painted a pristine white, date from the fourteenth and fifteenth centuries and are situated side-by-side which makes them one of a kind. The older Tughlaq-age mosque also has a distinctive semicircular dome, which again is unique.

Why these mosques were built alongside at the top of this hill is a mystery, as well as why they are referred to as Qasai Wala Gumbad, which is what they are called today.

Unfortunately for heritage enthusiasts, this site is difficult to explore because the mosques are with a religious organization that is in a tussle with the government for control, with an ongoing court case. So, access is restricted to Thursdays for visiting Baba Murad Ali Shah’s small and intimate Mazhar, and wandering around is generally discouraged. 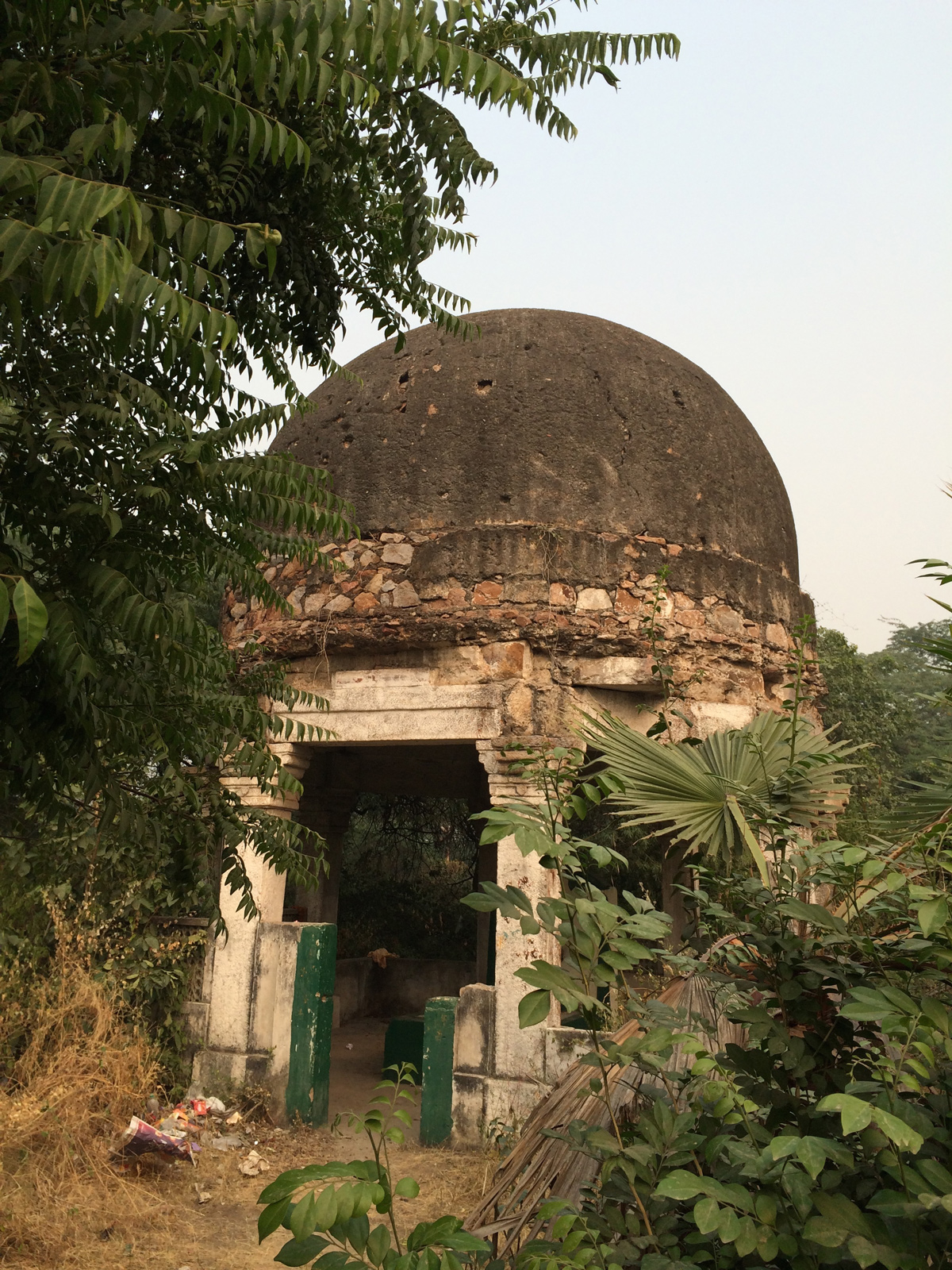 Baba Syed Murad Ali Shah’s Ancient Mazhar; Crumbling and Overgrown with Vegetation, Yet Retaining Its Magic and Aura
The mosques were now converted into a madrassa, called the Abdul Mannan Academy. I visited the madrassa and met with a polite caretaker in his office, but throughout I could feel a slight undercurrent of suspicion. Photography seemed out of bounds, but I was free to visit the classrooms and roam the grounds.
There were about a hundred children studying at the madrassa and I met a few of the students and teachers. They are from several places – Delhi, Bihar, Haryana. The students would normally stay at the madrassa for about two years, with those who could afford it paying their way, while about half the students were housed free.
To the credit of the religious organization that runs this place, the premises were well maintained and spotless, the structure of the mosques nicely restored, and the gardens done up tastefully with pathways and flowers. There was an atmosphere of serenity and calm.
Just beside the mosque-madrassa complex was Baba Murad Ali Shah’s timeless Mazhar. Here the access was unrestricted and I could linger to my heart’s content and do as I please. The Mazhar itself was worn and crumbling, shrouded in overgrown vegetation yet full of medieval magic and aura. 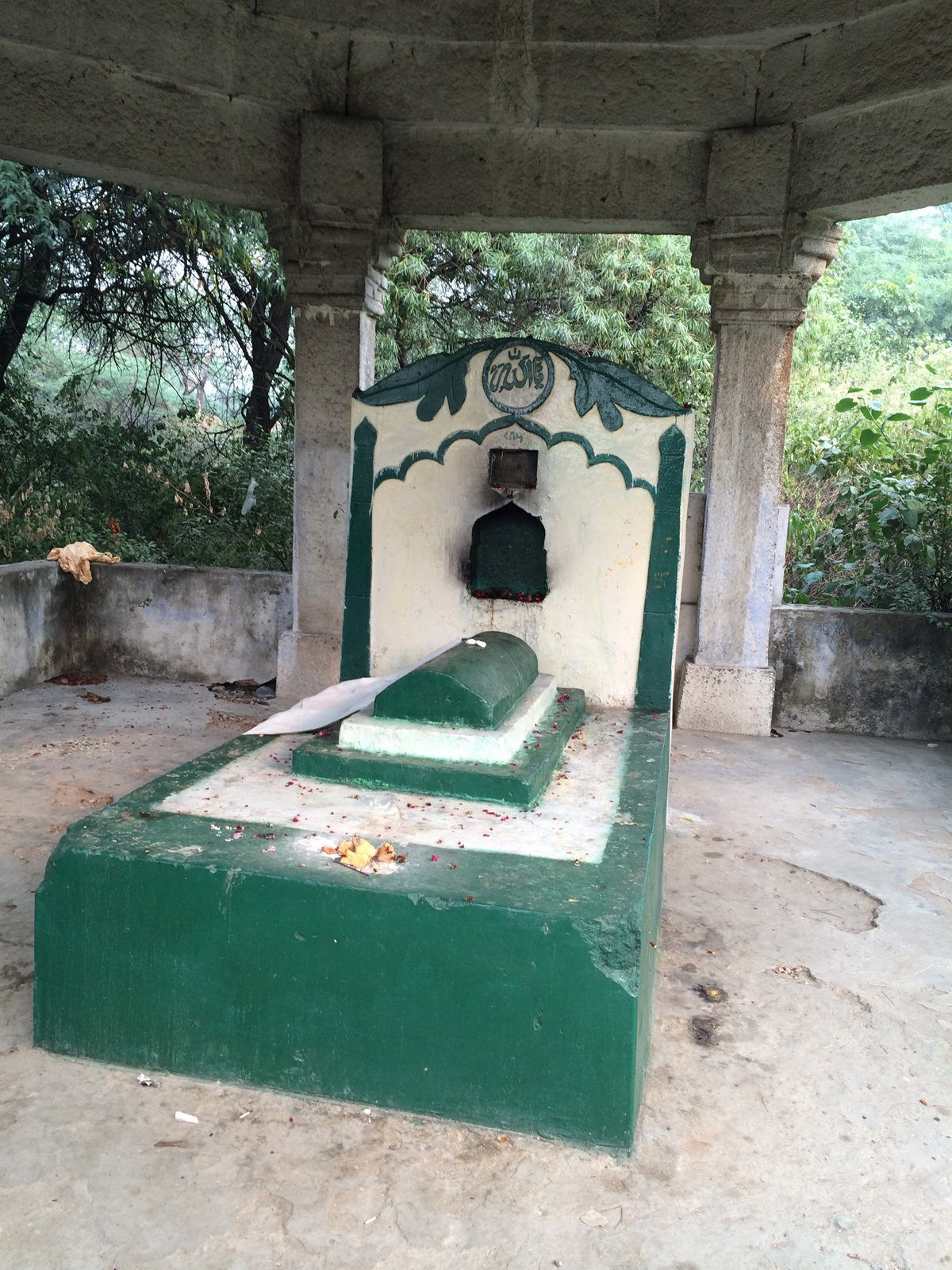 Quiet Rests His Soul: The Grave of Syed Murad Ali Shah
A single dome covered the humble grave of Murad Shah. There were no elaborate silk chadors of the kind that one finds in the more well-visited dargahs. Just an unassuming green and white painted grave, in a tiny well-swept, and intimate enclosure. A few flowers at the foot of the grave and an extinguished Diya were the only signs of this burial place being visited and tended to. The dome itself, about seven hundred years old, was still holding good but beginning to disintegrate. 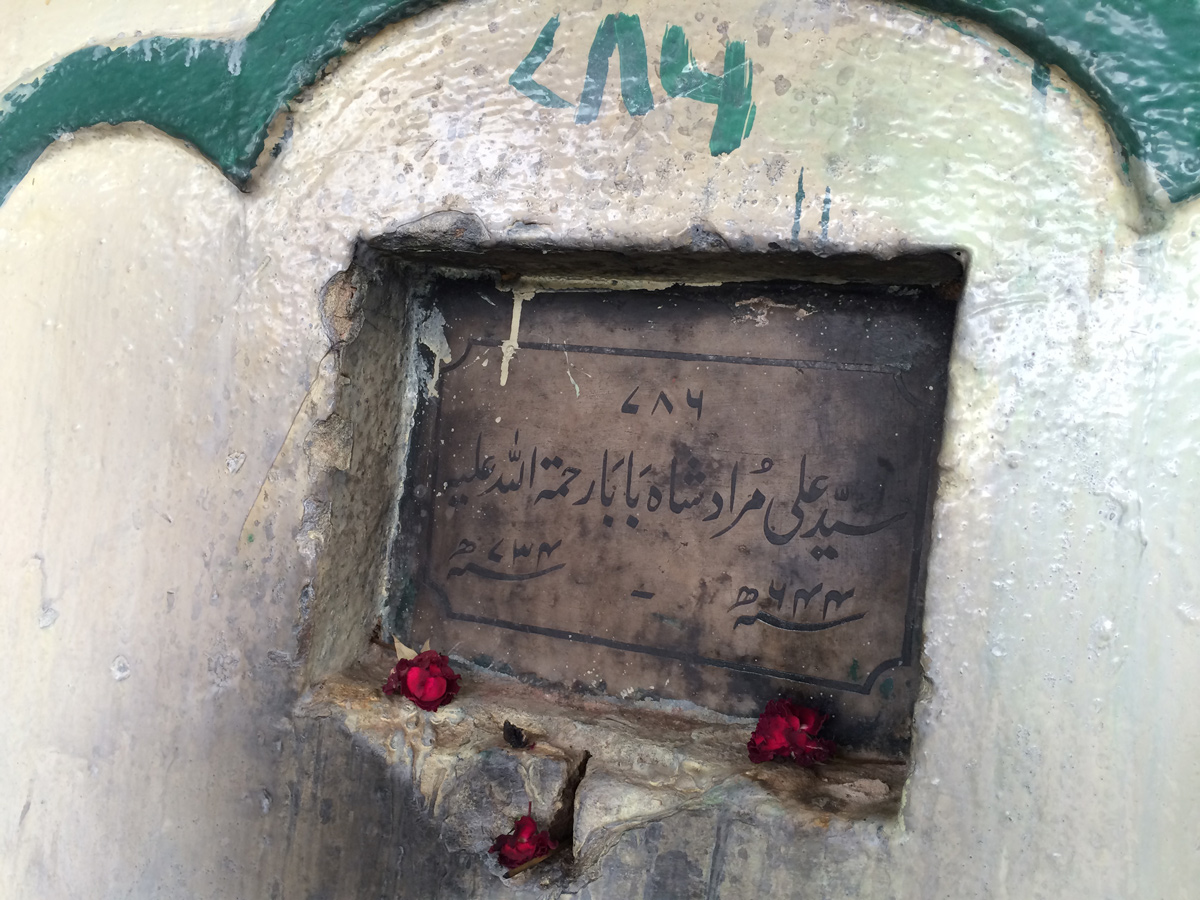 This dramatic contrast between the Baba’s unpretentious Mazhar and the adjacent well-tended mosques was too apparent to miss. Murad Shah would himself have smiled at this disparity, which probably points to an ancient divide in religion that has been a fault-line right through India’s medieval history.
Orthodox Islam and Sufi saints have always had a frosty relationship. The institutionalized ulema was uneasy about the distinctive practices of Sufis, their way of life, and their inclusive popularity with the masses. I may be guessing, but what was true in the Sultanate era six hundred years ago could also resonate today. Otherwise, why would the adjoining madrassa be lavished with attention while the original Mazhar of the Sufi mystic who gave this hill its name be left to languish? 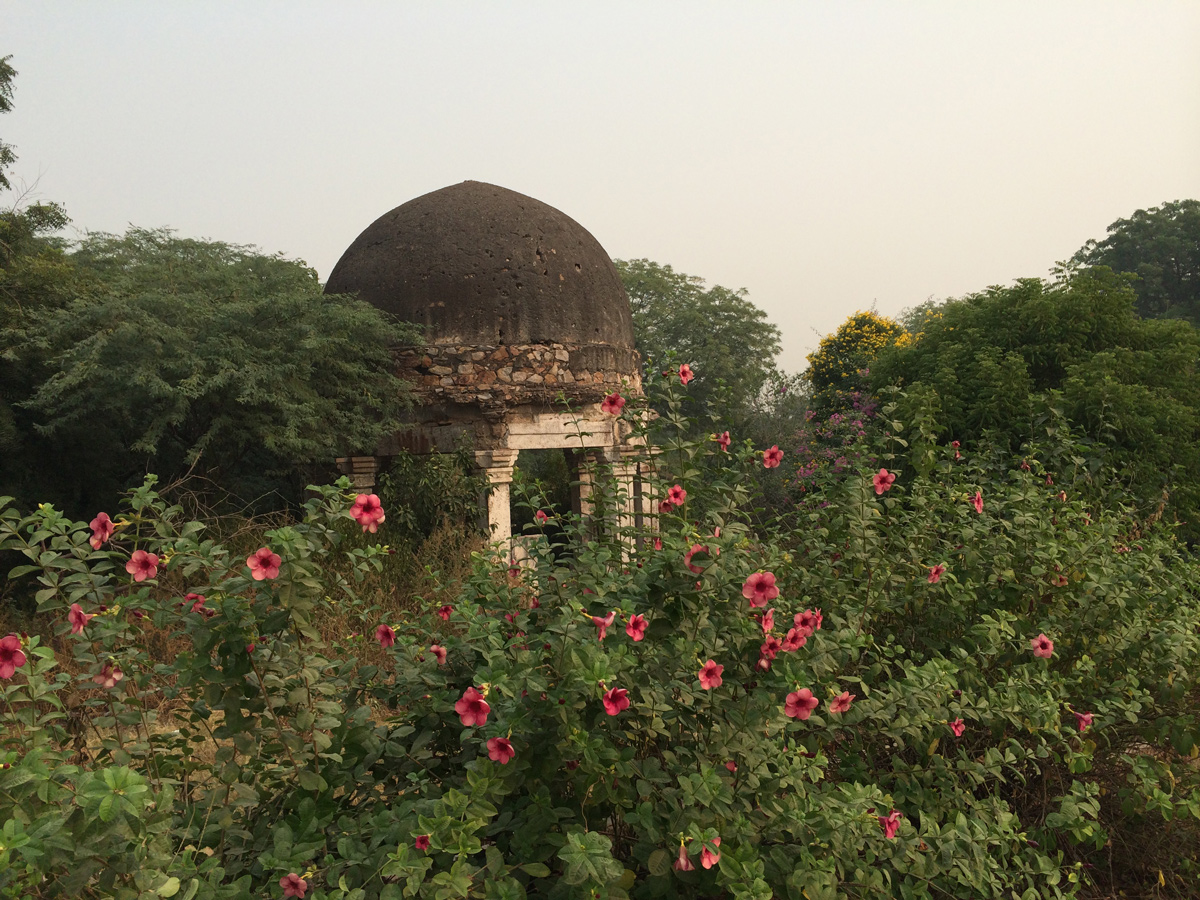 Baba Murad Shah’s Silent Mazhar In The Bosom of Wild Flowers
Who was Baba Murad Ali Shah?
Though not much is known about him, I found some clues that provide intriguing insights on the man he could have been, and the world he lived in…
By the engravings on his grave, Baba Murad died in 1331, a few years after Delhi’s most famous Sufi saint Nizamuddin Auliya died in 1324. Would they have known each other? Probably, yes. Definitely if Baba Murad belonged to the Chishti Sufi silsila; or even if he was a disciple of other Sufi orders like the Suhrawardia and Qadiriya silsilas that also had a presence in Delhi. This was a golden age for Sufis in Delhi, with the city being a magnet for Sufi saints many of whom had khanqahs and are buried here; Delhi itself being called Hazrat Dilli as a mark of respect.
The political world at this time was messy and constantly changing. It is famously said that Nizamuddin Auliya dealt with thirteen different Delhi Sultans during his long life. Guessing from Baba Murad’s lifespan, he would have lived through the turbulent reigns of the Khalji dynasty (1290-1320) and the Tughlaqs (1320-1414).
This was a period of fearsome and nearly annual Mongol raids on Delhi, with the constant clash of swords in battle. It was also an era of super ambitious rulers. Baba Murad would have witnessed the eccentric rule of Muhammad Bin Tughlaq, including his disastrous decision to shift his capital from Delhi to Daulatabad to avoid the curse of the Mongol raids.
Would the Baba have hidden here in his khanqah, then deep in the Aravalli forests, to ride out the storm? Or would he have been compelled to trek to Daulatabad and back like many of his fellow Delhi residents were forced to do?
And what would a day-in-the-life have been at this hilltop refuge? Sufi pirs lived either in khanqahs; which were large convents with accommodation for residents and visitors and arrangements for feeding the poor, or in zawiyahs; which were much smaller sanctuaries for mystics to live and pray, more inward-focused and not aimed at contact with the outside world.*
Judging from what I had seen, Baba Murad created a small zawiyah on this forested (at the time) hilltop, with a few murids for company, and interacting with the local residents. He had deliberately chosen to live miles away from the big urban centers and palace intrigues; which in those years would have centered around either Siri (today’s Hauz Khas) or Tughlaqabad (the commanding walls of which still exist) or Jahanpanah (present day Saket), all of which were then the big capitals of the powerful Khalji and Tughlaq Sultans.
* Fatima Hussain, “Chishtis during the Delhi Sultanate : a balance between ideals and practise”. Page 65

Sufis and Their Relationship With Power

Though Islam was first introduced to India through the Malabar coast by Arab traders, it was the Sufi pirs with their inclusive teachings of tolerance and equality that had the biggest impact on the Indian subcontinent. By the thirteenth century, Sufism had become a mass movement, and a number of Sufi orders were established like the Chistis, which was the largest, headquartered in Ajmer.
Sufis emphasized the inner self rather than external rituals, freeing themselves from ego and serving humanity. Sufi saints were expected to live in poverty, and “not to possess anything and nothing should possess you”.
They had some distinct practices; like the Pir-Murid relationship (where the disciple places himself under the guidance of the Sufi Shaikh or Pir), the use of Sama (or music, to induce a state of ecstasy and closeness to God, which gave rise to the qawwali genre), and the Ziyarat (visiting the shrines of Sufi saints for prayer and blessings, the offerings of flowers and chadors on the graves, including the celebration of urs on the day of the death of the Sufi saint).
This Sufi mysticism and way of life was frowned upon by the “the cold formalism and hair-splitting ideology”* of the orthodox ulema who resented their mass popularity. The ulema often tried to gang up with the Sultans to take on the Sufis, probably made easier by the fact that Chishti saints were actively discouraged from being close to political power.
But the Sultans on their part craved the acceptance of the Sufi saints and wanted to be associated with their fame and popularity, often bending over backward to show reverence to the Sufis. Thus, in the public imagination, there were three different corners of power-sharing; the political power of the Sultans, the religious power of the clerics, and the popular power of the Sufi saints.
* Fatima Hussain, “Chishtis during the Delhi Sultanate : a balance between ideals and practise”. Page 24