Posted at 00:32h in Blogs, Delhi by India Heritage

The Murder of Three Princes, and the End of the Mighty Mughals

Khooni Darwaza means “the Gates of Blood”. What is it about this harmless-looking gate on a tree-lined Delhi boulevard that gives it such a grisly past and a history soaked in such bloodshed? Read on, for as the cliché goes, if these medieval walls could speak…
It was the Afghan king Sher Shah Suri who had built these gates in the sixteenth century as the northern approach to his city. It was originally called Kabuli Darwaza, as caravans to Kabul passed through these doors. Even then, the gates were infamously associated with blood and gore as the severed heads of criminals would be hung from the ramparts as a warning for mischief-doers. Khooni Darwaza’s link with violence has continued to the present and as recently as 2002 a college student from the nearby Maulana Azad Medical College was unfortunately raped here. Since then Khooni Darwaza has been sealed, a giant black lock barring access to its three floors. 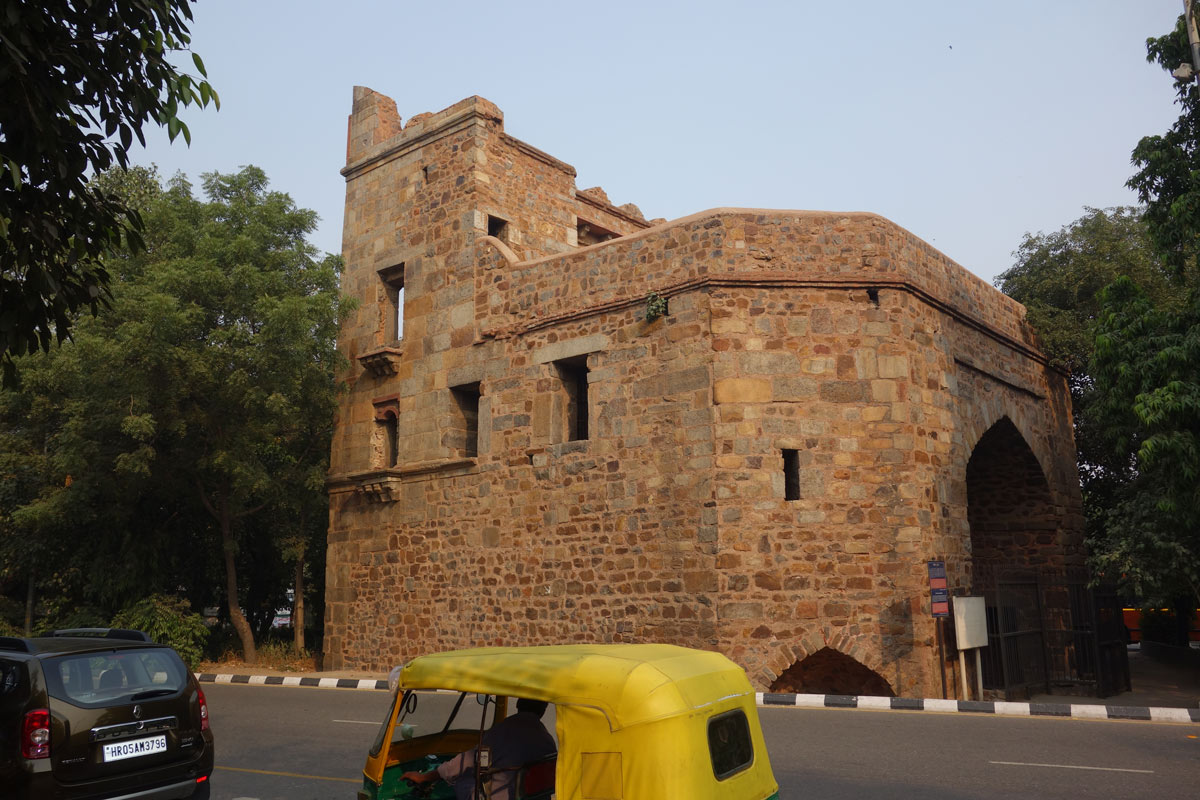 Khooni Darwaza As It Is Today; Difficult to Imagine its Violent History
The name Khooni Darwaza is traced to the high drama that unfolded here on the morning of a blazingly hot day, September 22nd, 1857. From then on, for perpetuity, this gate is inseparably linked with a Captain William Hodson of the East India Company and his infamous cold-blooded murder of three unarmed Mughal princes.

The Gates of Khooni Darwaza, Locked and Barred for Entry
Let me first explain the context that had led to such an explosion of fury in front of these gates.
For several decades leading up to 1857, the East India Company and its employees had been lording it over Delhi’s politics. The British Resident to the Mughal court was for all purposes Delhi’s chief executive, and the aged Mughal Emperor Bahadur Shah Zafar was relegated to the background, happy to pursue his poetry and mushairas. With the stability provided by the British protection, Delhi itself was having a remarkable renaissance. Arts and culture, in particular, were resurgent. Yet, while on the surface Delhi’s society was one of high sophistication and courtly manners, beneath this calm all was not well. Discontent was brewing with the locals, both Hindus and Muslims, getting increasingly put-off by perceived British insensitivity towards their native cultures. And the British community in India, which had earlier so enthusiastically adopted local customs as the original “White Mughals”, were now increasing isolated, living in their own little conclaves as “rulers” against the “ruled”.
Things came to an ugly head on May 10, 1857. Indian sepoys in Meerut revolted against their British superiors, killing many of them. That same night they set march for Delhi, reaching the Red Fort on May 11, 1857 and demanding that the Mughal Emperor Bahadur Shah Zafar become their leader. The British residents in Delhi were caught totally unprepared, and many were massacred by the sepoys. Those British residents that survived, fled to the ridge north of the city, and set up camp there.
For four months, from May to September, there was a deadlock. The rebel sepoys controlled Delhi, with the somewhat half-hearted blessings of the Mughal Emperor Bahadur Shah, while the British troops camped on the Ridge, waiting for reinforcements.
Finally, in September the tide turned in favour of the British. Buoyed by the arrival of their enigmatic leader John Nicholson, they mounted a ferocious attack to take back Delhi, entering the city through Kashmiri Gate. Though Nicholson himself died with the wounds he received in battle, the British succeeded in re-taking the city. The sepoy resistance collapsed, and many of them fled Delhi, along with their sympathisers.
The British were in a vengeful mood when they marched back into Delhi as victors. The glittering Shahajanabad and its famous Chandni Chowk were pillaged and left in ruins. Scores of Delhi residents were rounded up and put to the gallows. Realising the inevitable, the old Mughal king Bahadur Shah Zafar escaped from his palace at the Red Fort, and made his way to Humayun’s Tomb. From there he negotiated his surrender with the British, and was pardoned his life in return for his surrender. 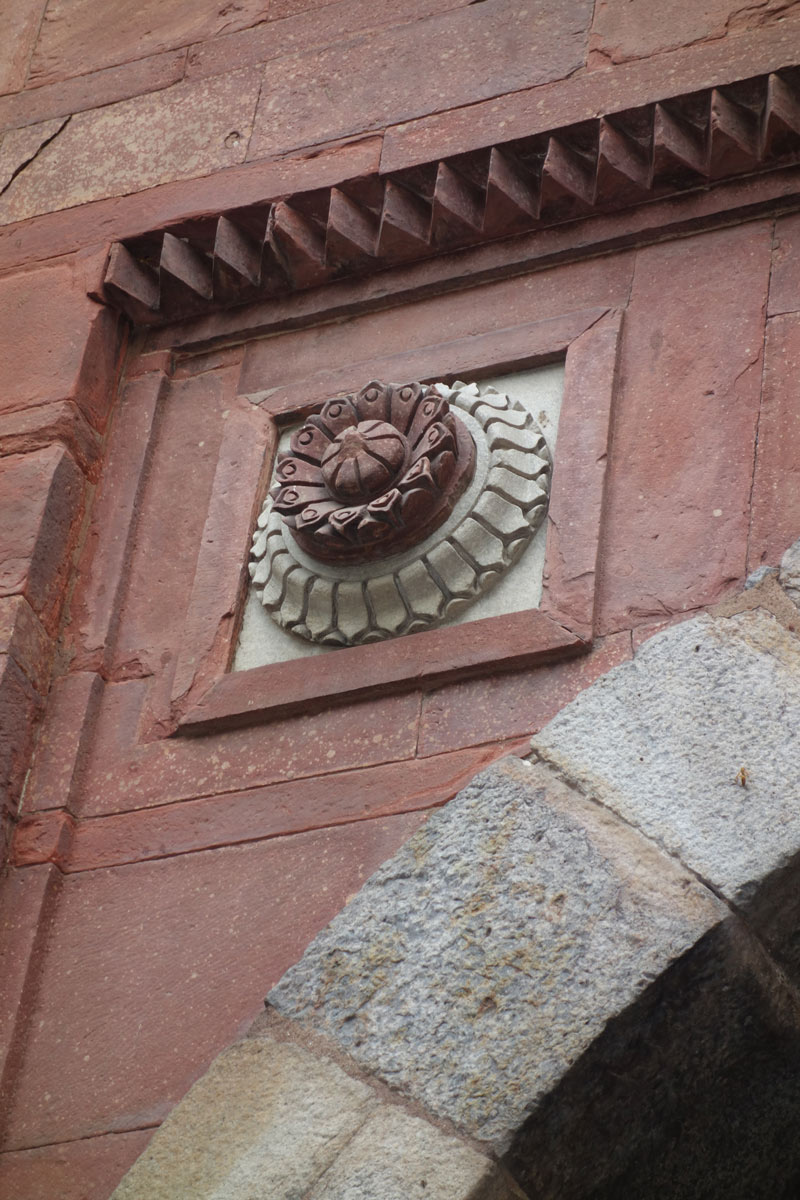 Ornate Details on the Front Facade of Khooni Darwaza
Throughout these events, a key player leading the British negotiations was the tall, slim and blonde-haired Captain William Hodson. Hodson was unusual among the East India Company’s soldiers for being educated at the elite Rugby School and Cambridge University. He was a reader of classical literature in his spare time and a keen linguist, proficient in Hindustani and Persian, besides being a brilliant swordsmen and horseman and credited with introducing khakhi as a uniform for soldiers in India. Hodson had come to India at the age of twenty-three and is described as “a tall man with yellow hair, a pale, smooth face, heavy moustache, and large, restless, rather unforgiving eyes”.
But the man clearly had a chip on his shoulder. As his brother George Hodson describes, “…coming to India at a more advanced age, with greater advantage of education, and greater natural abilities than most of his compeers, he was quite conscious of his superiority, and took no pains to conceal it, but, more specially, in his earlier days, was overbearing and un-conciliatory”. One can imagine that Hodson wasn’t overly popular with his fellow soldiers.
For all his brilliance, Hodson throughout his career was never far from controversy. He was twice accused of embezzling funds, and twice investigated for these financial malpractices, though nothing was ever proved.
Now, during the siege of Delhi, Hodson played a leading role. He had set up an elaborate espionage network of spies and informers within the city, and it was this superior intelligence that had played a big part in British victory. So, after the re-taking of Delhi, Hodson was made the chief negotiator for ensuring the surrender of the Mughal king. He achieved this quickly, getting Bahadur Shah Zafar to give himself up in return for a pardon on his life.
Hodson next turned his attention to Zafar’s sons. What exactly were his instructions for dealing with the Mughal princes is not clear. Some historians believe, that when Hodson captured the Mughal Emperor, he was criticized by his superior General Wilson for doing so, with Wilson remaining indifferent to the “achievement”. Did Hodson take this as a hint to capture no more prisoners? Did this colour his attitude towards the Mughal princes? After all, these were the same Mughal princes who had put up such resistance to the British, and they could do so again. In Hodson’s eyes, they had to be removed.
The day after Bahadur Shah Zafar’s arrest, on 22nd September 1857, Hodson rode back to Humayun’s tomb, to capture the three still-defiant Mughal princes; Bahadur Shah’s sons Mirza Mughal and Khizr Sultan and his grandson Mirza Abu Bakr.
It was early morning, and Hodson was accompanied by a hundred mounted sowars (mounted soldiers). From within Humayun’s tomb, the princes sent out a message to Hodson – like for our father, give us life pardon in exchange for laying down arms. But, this time Hodson insisted on an unconditional surrender and offered no promises. After a few tense hours of negotiations, the princes submitted to Hodson’s will, and decided to give themselves up. A bullock-cart with the three Mughal princes slowly rolled out of Humayun’s tomb, and was met by Hodson and his mounted soldiers. The caravan started making its way to Red Fort.
Meanwhile, word had spread in Delhi about the prince’s surrender, and a sullen crowd collected to follow the caravan. The crowd kept swelling. The sowars, astride their horses, kept the edgy crowd at bay; but the tension was palpable, and rising.
There were just two Britishers at the scene. One was Hodson, and the other was his accomplice, Lieutenant MacDowell, who would later play a key role as witness to what really happened that day, and why. Hodson claims that the crowd surrounded them, and was infiltrated by threatening ghazis, with a plan to free the princes. Whatever the reason, in front of Khooni Darwaza, Hodson suddenly commanded the bullock-cart to stop, and ordered the princes to get off.
The three Mughal princes climbed down from the bullock-cart, in the hot mid-day sun. They stood huddled together, defiant yet fearful. Hodson was astride his horse, revolver in hand. His sowars were around him, keeping the restless crowd at bay.
Hodson ordered the princes to strip off their upper garments. He spoke loudly, in Hindustani, addressing his troops and the surrounding crowd, justifying what he was about to do. These princes are butchers who murdered helpless women and children, he said, and the Government has now sent their punishment. Then quickly, taking his revolver to hand, Hodson shot the three princes at point blank range, one after the other.
With three deliberate shots, the principle members of the famed Mughal house of Timur were no more. For the next three days, their lifeless bodies were strung up and left hanging from these gates, as a public display, for all to see.
And Khooni Darwaza had earned its name for eternity.

In sharp contrast to the chaos that he caused in Delhi, William Hodson’s grave rests quietly within the vast grounds of La Martiniere College, Lucknow. Just six months after his brutal murder of the Mughal princes at Khooni Darwaza, Hodson was himself killed in Lucknow, during the “final assault at Lucknow March 11th 1858”.
A villain to some, a hero to others….“Here Lieth all that could die of William Stephen Raikes Hodson…” 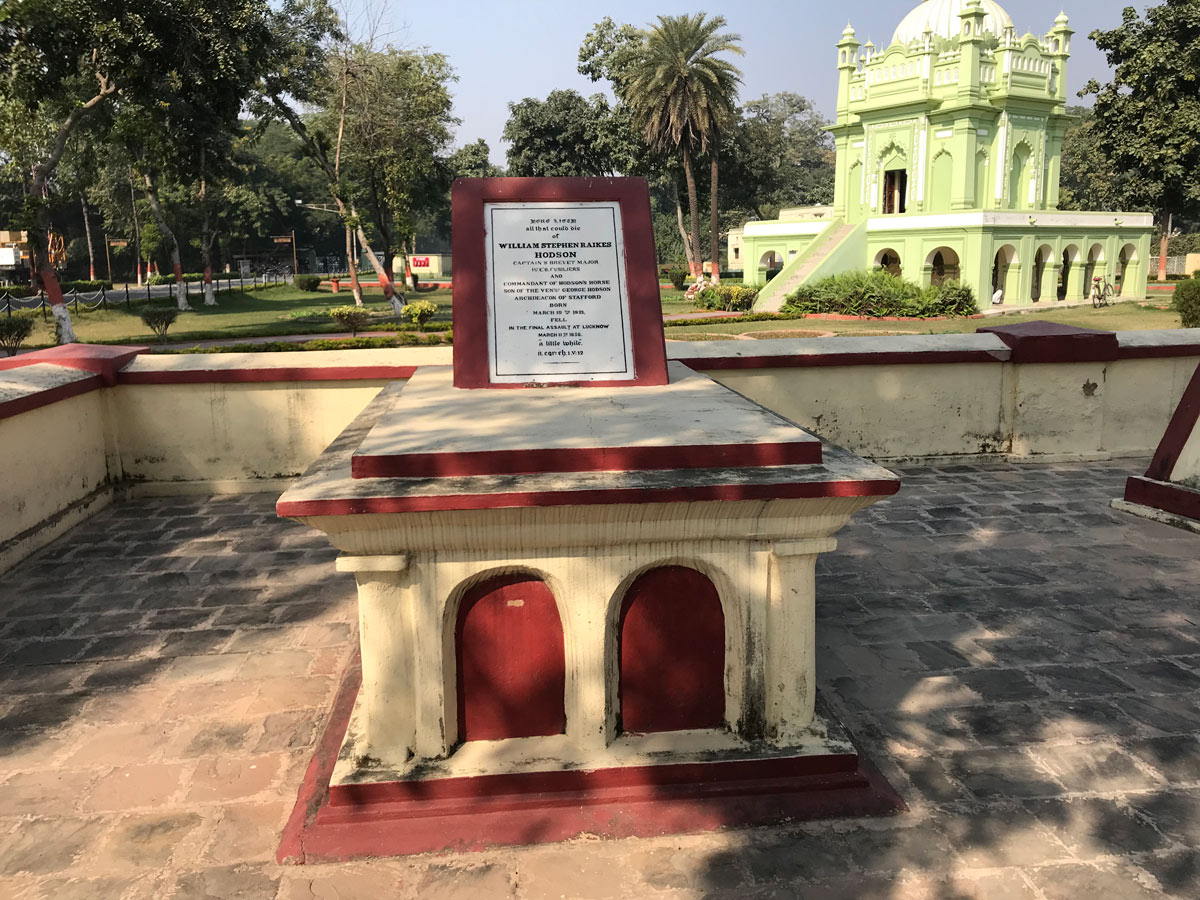 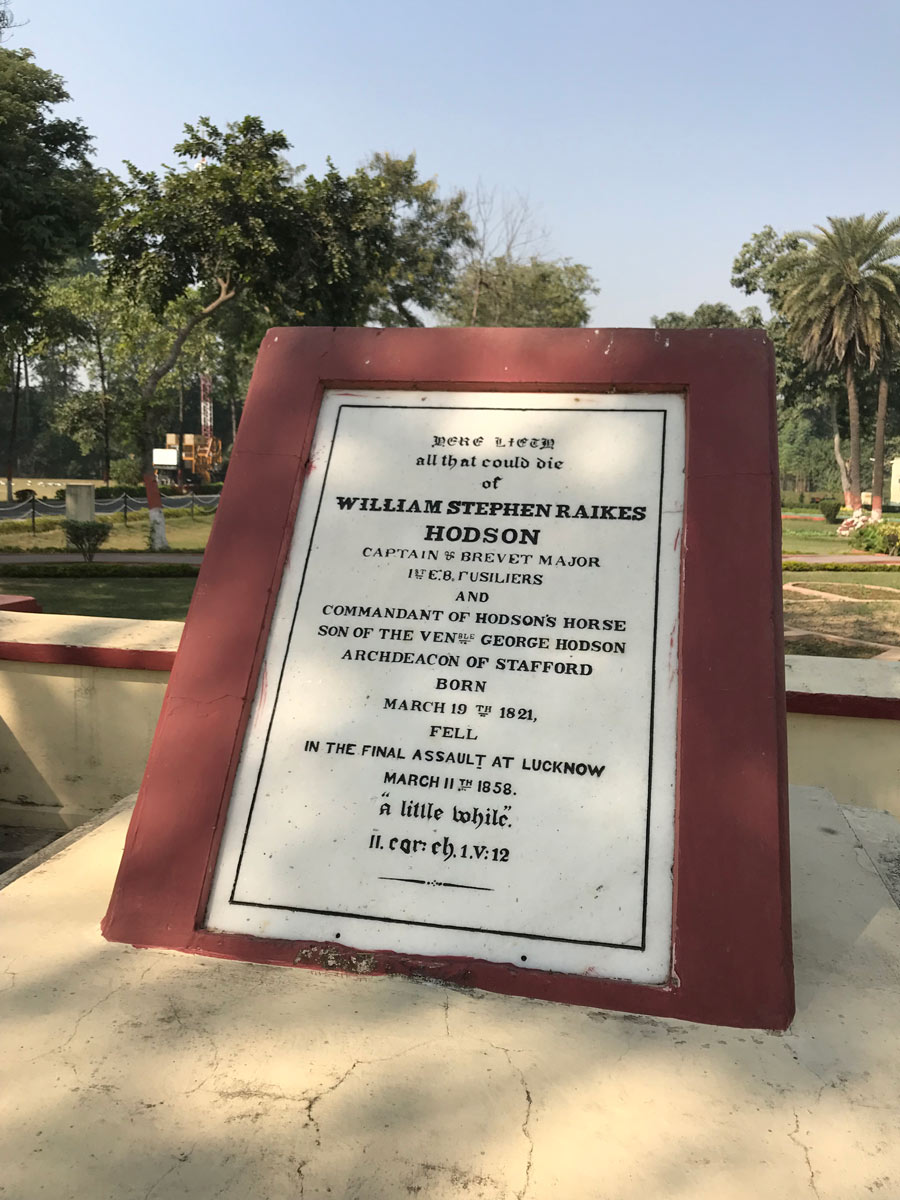 The headstone of William Hodson’s grave.