Posted at 00:32h in Blogs, Delhi by India Heritage

The Gates that changed the course of India’s history

Kashmiri Gate is another of Delhi’s old landmarks made famous by the 1857 uprising. This was one of the fourteen original gates to the city of Shahjahanabad (old Delhi), and it was through Kashmiri Gate that the charging British forces, led by their hero John Nicholson, had battled their way back in to the city by quelling the rebellious sepoys. The re-taking of Delhi by the British changed the tide of the 1857 uprising and had broken the back of the revolt. Along with that, it had also changed the course of India’s history. 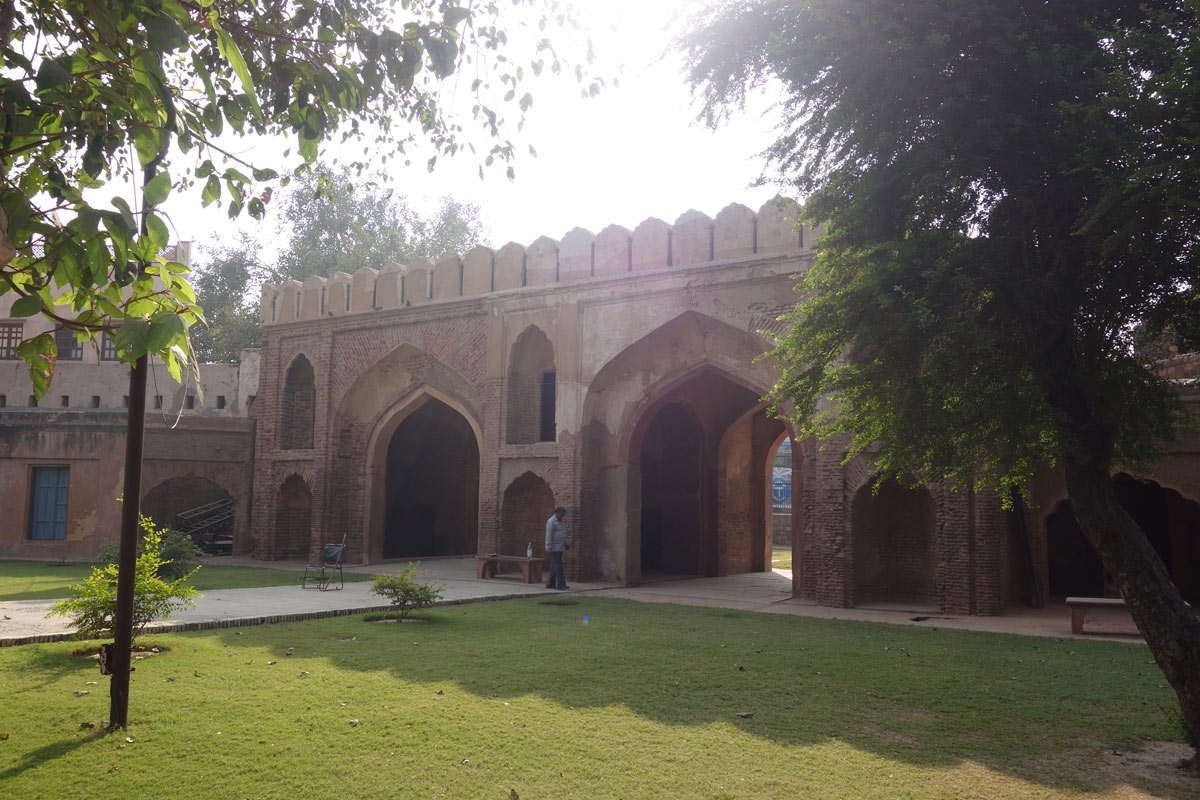 The historic double arches of Kashmiri Gate, the scene of a momentous and bloody battle in 1857
In the summer of 1857, Indian sepoys in Meerut had revolted against their British superiors, bringing to a head long simmering tensions and kick-starting the Sepoy uprising or the first war of Independence. Within a day, the sepoys had marched to Delhi and massed around the Red Fort, demanding that the aged Mughal emperor Bahadur Shah Zafar become their leader. The city was plunged into turmoil, and in the chaos many British residents of Delhi were killed. Those that survived fled the massacre by escaping to the ridge in the north of the city where they set up camp, both soldiers and civilians together, keeping an uneasy eye on the city and waiting anxiously for reinforcements to arrive.
This stalemate remained for four months between May and September, through the onset of the heavy monsoon rains. The sepoys would regularly attack the British camp on the northern ridge, trying to dislodge them. But somehow the British held on and resisted.
Then in early September there was a change in British fortunes. Brigadier General John Nicholson, Britain’s “Hero of Delhi”, marched in to their camp on the ridge with desperately needed reinforcements from Punjab. The tall and much-feared Nicholson was a fierce leader with a powerful presence and he made an immediate impact, displacing the veteran General Wilson as boss. Nicholson seemed brutally impatient of the older Wilson, writing that…“I have seen lots of useless Generals in my day; but such an ignorant, croaking, obstructive one as he is, I have never hitherto met with”.
On his part, Nicholson quickly decided that the time was right to attack Delhi and retake the city. “The game is completely in our hands”, he wrote, “we only want a player to move the pieces”. The elderly Wilson was persuaded to come around to his view, and a date was set for September 14th 1857, with Nicholson appointed the leader for the assault.
The British plan of attack hinged on invading the city through Kashmiri Gate, one of Shajahanabad (old Delhi’s) fourteen entry gates, that guarded the route to the North. It is from here that the road to Kashmir started. 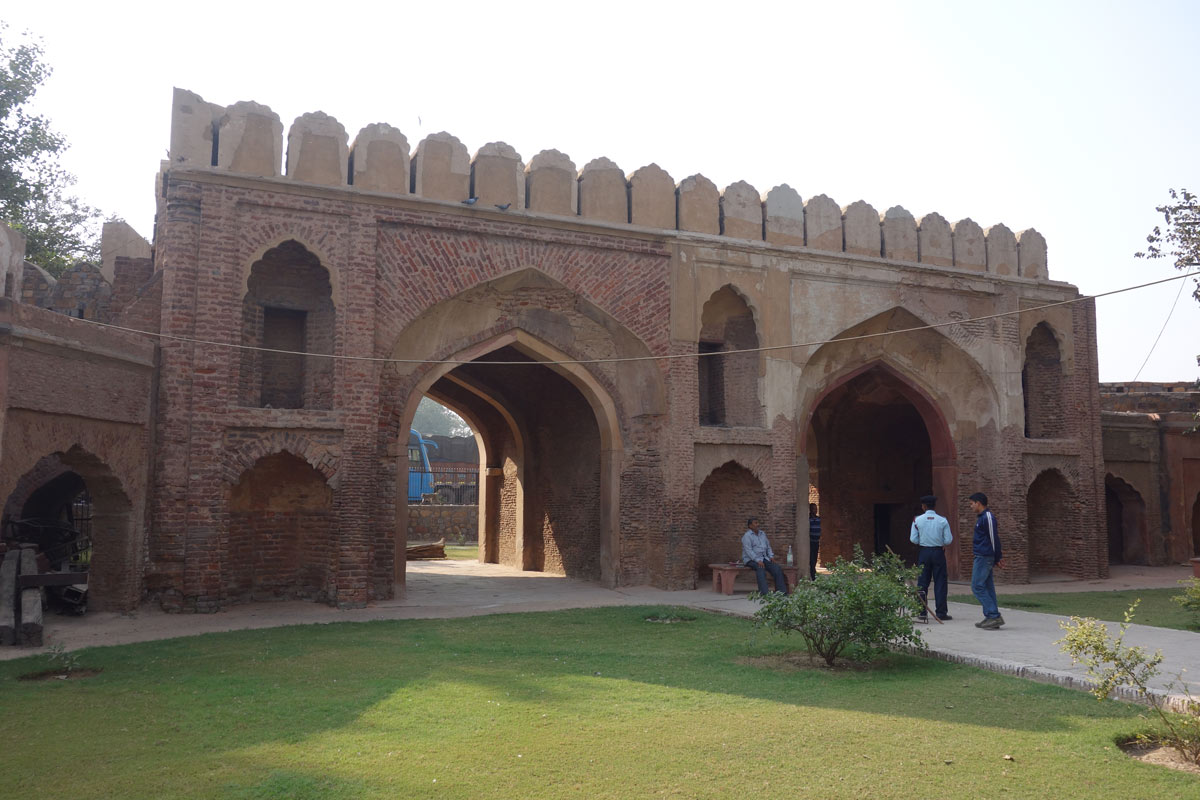 John Nicholson charged through these gates to re-take Delhi, but lost his life in doing so
Early on the morning of September 14th 1857, the British attacked Kashmiri Gate with Nicholson personally leading the assault. The fighting was fierce, starting in the morning mist and lasting several bloody hours in to the hot afternoon. In the brutal, often hand-to-hand combat, casualties were high on both sides. Ultimately the British prevailed, taking control of Kashmiri Gate and re-entering Delhi. With this, the tide and fortunes of the 1857 revolt tilted decisively towards the British and over the next few days the back of the sepoy resistance in Delhi was unsparingly crushed, forcing them to flee the city in defeat.
In his hour of glory, fate was not kind to John Nicholson. The “Hero of Delhi”, the man centrally responsible for the British re-asserting control over the narrative of the 1857 uprising, was himself shot and mortally wounded in the fighting over Kashmiri Gate. Nicholson was hastily carried back up to the ridge for his wounds to be treated, but he never recovered and died a few days later. John Nicholson is buried in Nicholson’s Cemetery; a stone’s throw from Kashmiri Gate, the gateway he died fighting over.
Today, this huge historical significance of Kashmiri Gate has faded from the city’s conscious. Life hurtles past and around Kashmiri Gate, with streams of busy traffic passing by without a nod in its direction. I used the Delhi Metro to get me to Kashmiri Gate from South Delhi in an easy thirty minutes. As I came out of the Kashmiri Gate station, I was greeted by the bright hoardings of Ritz Cinema in front and Kashmiri Gate itself was just a couple of minutes walk from the station that bears its name.
A protective iron railing and a short expanse of well kept grass surrounds Kashmiri Gate and sets it back from the traffic, giving it a quiet and contemplative air even in the midst of all the hurly-burly that surrounds it. I entered the fenced compound and walked up to Kashmiri Gate, standing under its still-imposing archways. The gate has two wide arches, one for entry and another for exit, and high enough for royal processions to pass through. Much of the original structure was destroyed in the fighting of 1857, so a lot of the masonry that I could see today was not original.
As I stood beside these powerful gates, I could imagine the violent scenes that took place here a century and a half ago. But, it was only when i passed through the double arches and out the back, that the full force of the violence and bloodshed of that fateful day truly hit home. The battle scars and signs of war are still fully visible. Big chunks of wall were damaged and pock-marked with the heavy cannon ball fire of 1857, and remain in that condition today. 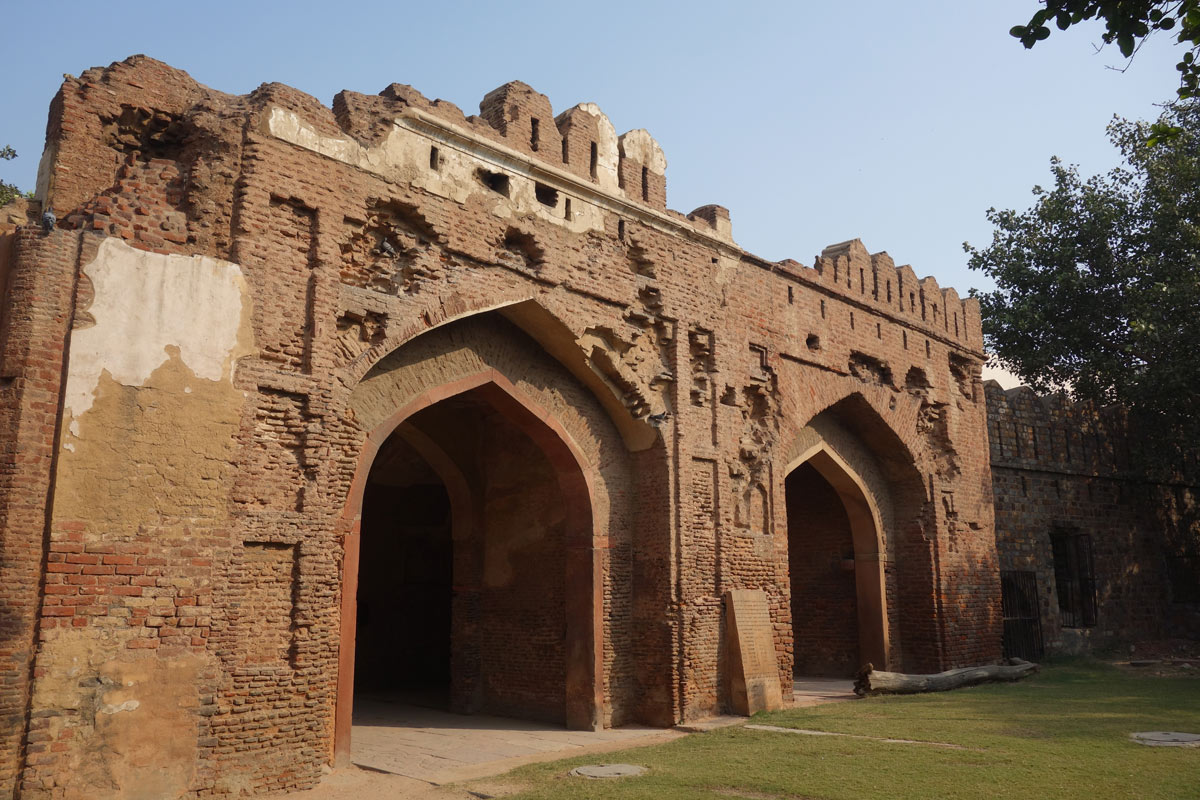 Against the wall was a simple stone-carved plaque that commemorates the day September 14th 1857, and listed those killed and mortally wounded. The original letters have faded over time, prompting the ASI to erect a steel replica on the side, lest these poignant words are lost forever. It’s a moving reminder of the day the British force stormed Delhi and decisively tilted the fortunes of the 1857 Uprising. The plaque reads ‘…it was after sunrise on that day that the under mentioned party advancing from Ludlow Castle in the face of a heavy fire…lodged power bags against and blew in the right leaf of this gate thus opening a way for the assaulting column.’ The names of the eleven mortally wounded or killed included Lieutenants, Sergeants, Corporals as well as “Soobedar”, “Jemadar”, “Havildar” ; both British names and Indian. 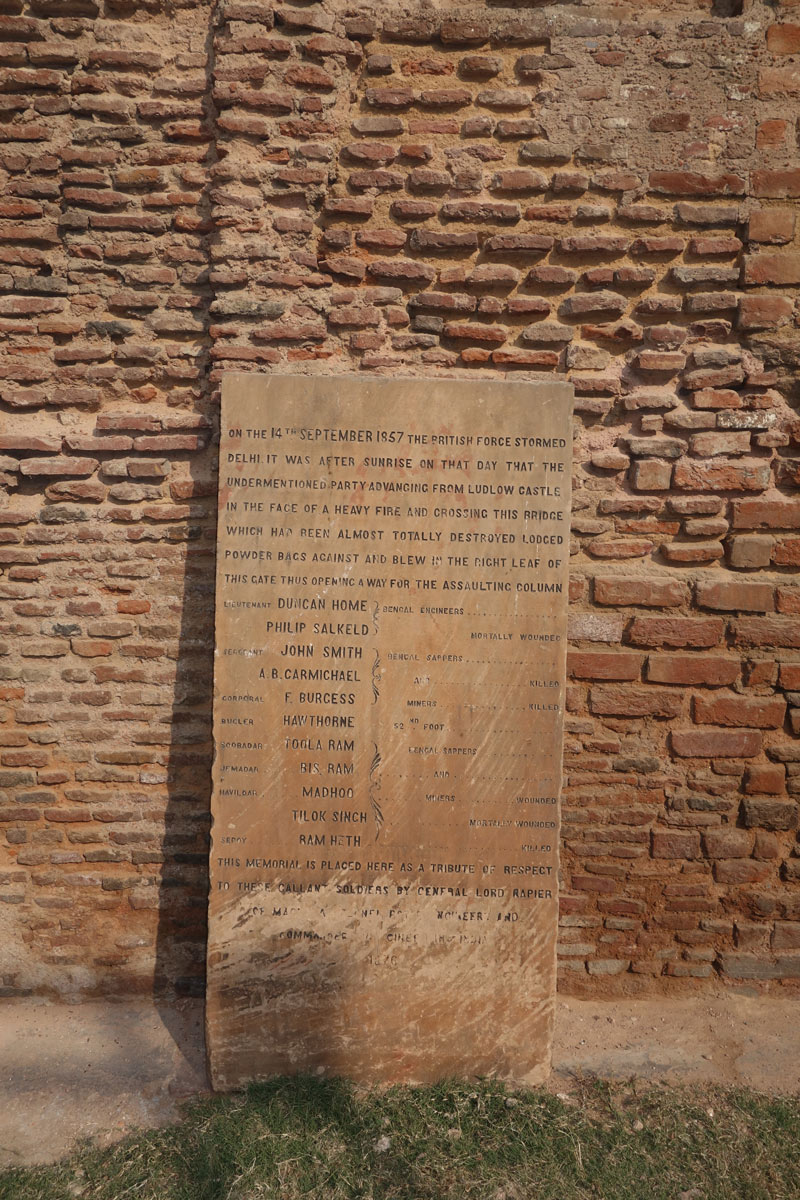 A poignant plaque with a moving message, listing the dead from 1857

Attached to Kashmiri Gate was a small section of the original city walls which are still intact. This is not generally open to the public, so I approached the small ASI office (Archaeological Society of India) tucked to the right of the complex for approval to climb to the top of Kashmiri Gate. I met a young and pleasant ASI officer, who readily agreed to my request and also volunteered to accompany me for the short climb to the roof. We together ascended a narrow winding staircase one behind the other to emerge on the top of Kashmiri Gate, with sections of the walled ramparts stretching to our left and right. As I stood above these historic arches, looking down on to the busy thoroughfare below, I could sense what the sepoys must have felt on that misty September morning in 1857, peering in to the morning haze for signs of the fearsome John Nicholson and his invading British forces…

The Legend of Nikal Seyn