Posted at 07:10h in Blogs, London and the Raj by India Heritage

A walking Tour of Gandhi’s London

Mahatma Gandhi was drawn to London on five occasions, first as a student and then for political delegations. And though he had devoted his life to fighting the British for his country’s independence, Gandhi was moved enough with London’s “pleasant experiences” to declare his love for the city and its people.
If you are looking for a unique lens to explore London with, you could spend a day discovering Gandhi’s London touch-points. It will take you to unusual locations that are not often visited, and give you an excitingly different perspective on the city.
London is easy to explore on your own. All you need is a London metro map, and the curiosity to seek and find. If you follow my travelogue below and pace yourself as it suits you, I am sure you will discover London in a never-before way and thank me for it later!

Start the day by visiting the quiet, residential lanes of Barons Court, to the west of London, where Gandhi had first lived as a student in 1888.
The London metro will get you to Barons Court station, and Barons Court Road is opposite the station exit with house number 20 just a five-minute stroll away. Walking this route gave me the goose-bumps, as I realized that Gandhi himself must have trodden these steps several times a day while commuting from his home to different parts of London. The only difference being that the trains Gandhi used were noisy steam engines and not the electric carriages of today. 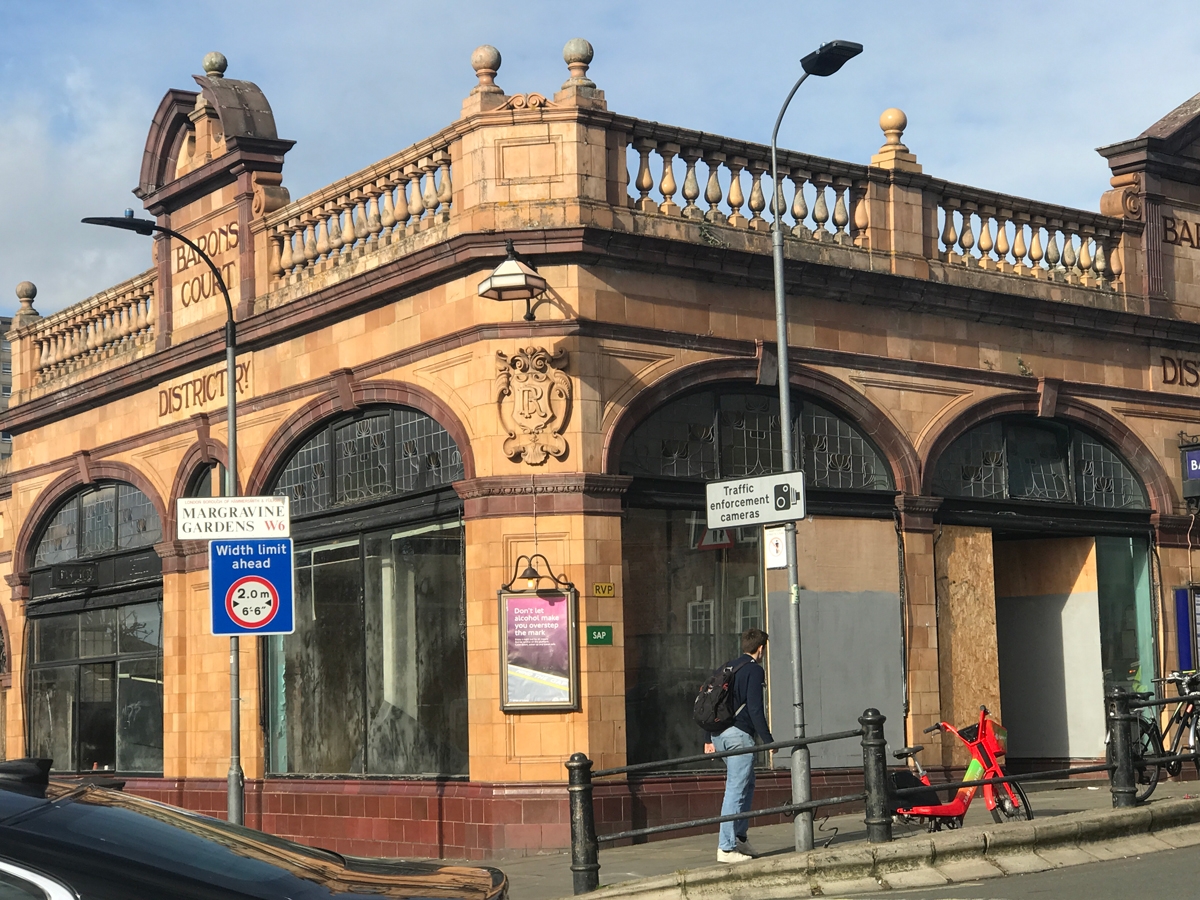 Barons Court Metro Station; Gandhi’s Local Commute
Number 20 Barons Court Road is an unassuming four-floor Victorian terraced house. A blue plaque installed by English Heritage commemorates the fact “Mahatma Gandhi lived here as a law student”. While i busied myself taking photographs, a small child peeped out at me from behind the drawn curtains… making me wonder what the current residents make of their illustrious past-tenant.
When Gandhi first arrived in London as a young nineteen-year old law student, this is the home that he stayed in. The widowed landlady – Elizabeth Fanny Taylor – had herself lived in India and was happy to take him in. Gandhi was charged 30 shillings a week (about four pounds), which he soon found to be expensive and so he shifted out to more frugal lodgings after living here for nine months.
Gandhi’s biggest issue was finding vegetarian food. He had promised his mother not to touch wine or meat, and though Elizabeth Taylor tried her best to serve him vegetarian fare, Gandhi termed it “third rate”. Ultimately, he took to cooking himself and even managed to locate some vegetarian restaurants to frequent. 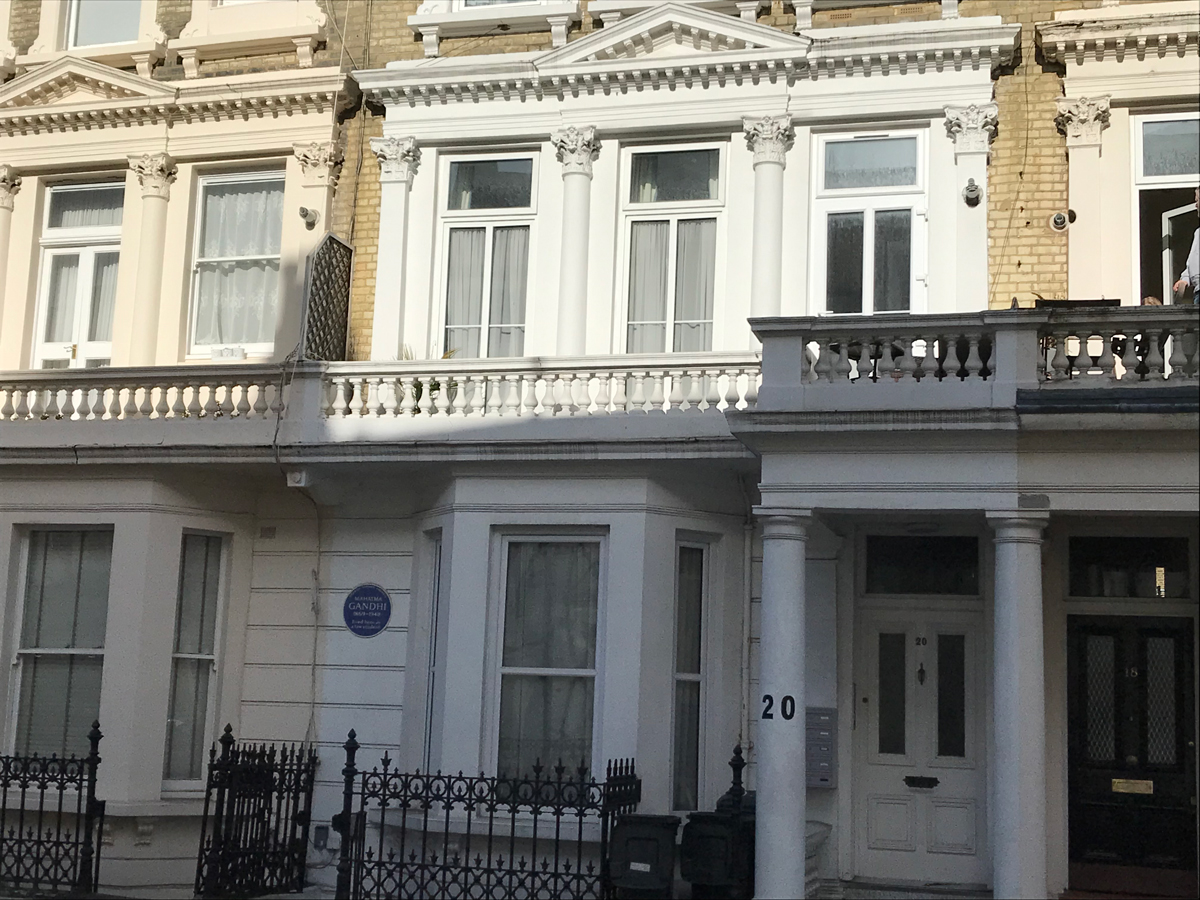 No. 20 Barons Court Road, With the English Heritage Blue Plaque Recording Gandhi Living Here in 1888 as a Young Law Student

Next, make your way back to the Barons Court Station and catch the metro to Westminster, a distance of eight stations or fifteen minutes.
Immediately outside Westminster station is the historic Parliament Square, a green patch of lawn ringed with statues of the great and the good; Winston Churchill, David Llyod George, Benjamin Disraeli, Nelson Mandela, Mahatma Gandhi.
Gandhi’s bronze statue is one of the more recent ones to be installed in this square, erected in 2015. For me, the fact that a benign Gandhi (and for that matter, Mandela) stands beside the scowling, brooding Winston Churchill in the very heart of historic London speaks volumes for how much London itself has changed; turning its back on racism and imperialism to become the cosmopolitan, inclusive world city of today. 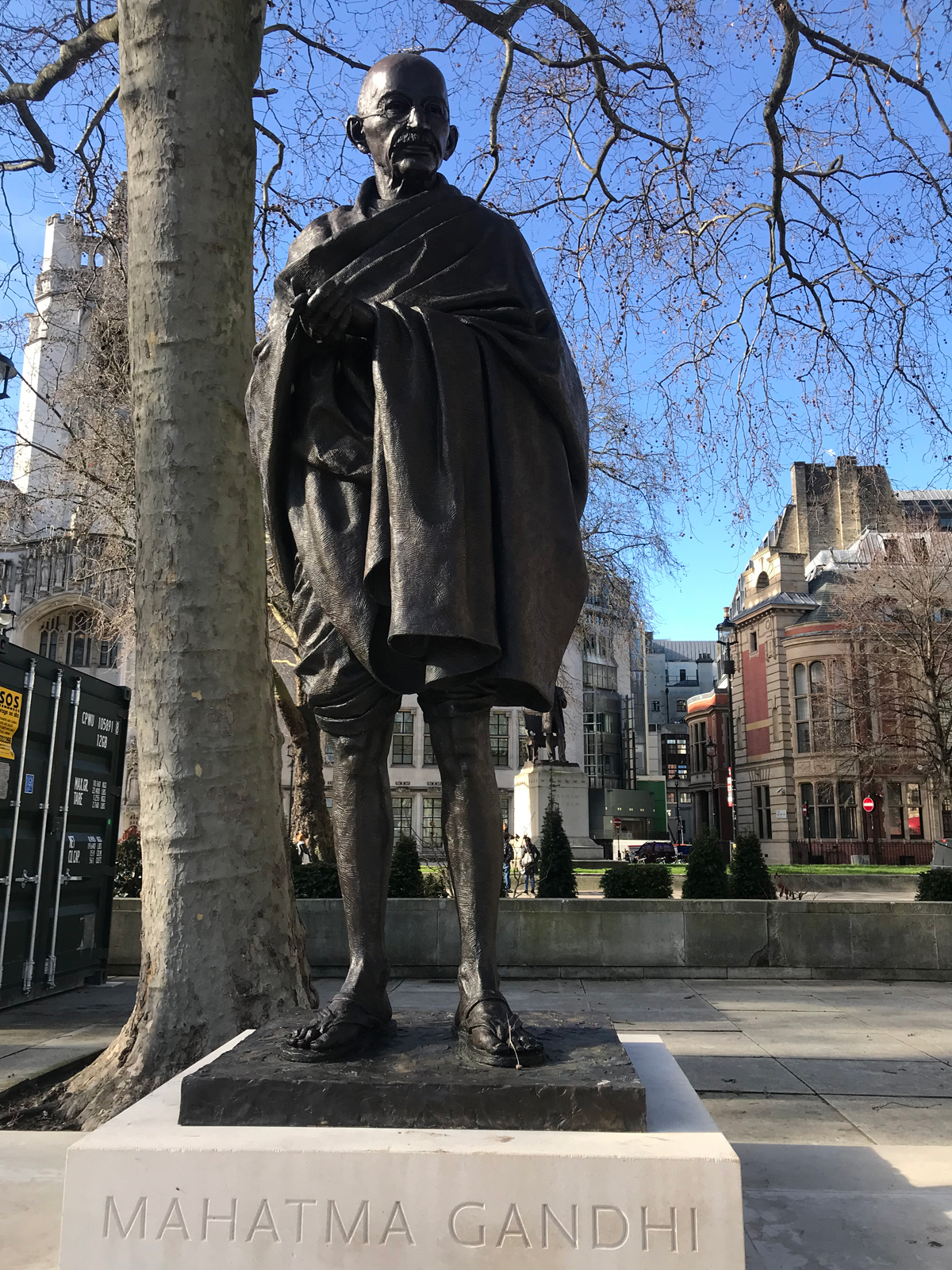 A Solemn Gandhi Looks Out on the Crowds of Parliament Square
There is much to discover around Parliament Square. You are surrounded by London’s famous landmarks; Westminster Abbey, Big Ben and the Houses of Parliament, The Cenotaph, Downing Street, London Eye.
And besides, there are also plenty of restaurants and pubs to satisfy any kind of appetite, whether Gandhian or non-Gandhian!

The Inner Temple; Where Gandhi becomes a Lawyer

The Inner Temple is one of London’s four “Inns of Court”; where students train to become barristers (the others are Gray’s Inn, Lincoln’s Inn and Middle Temple).
Gandhi studied at the Inner Temple for three years from 1888 to 1891. And it’s not Gandhi alone that connects Inner Temple with India, for both Jawaharlal Nehru and Muhammad Ali Jinnah too are distinguished barrister-graduates from this very place!
Temple is a short two-metro hop away from Westminster. You will exit on to the busy Strand, and then walk past the wonderfully ornate gothic architecture of the Royal Courts of Justice to come to one of London’s most celebrated roads; Fleet Street. 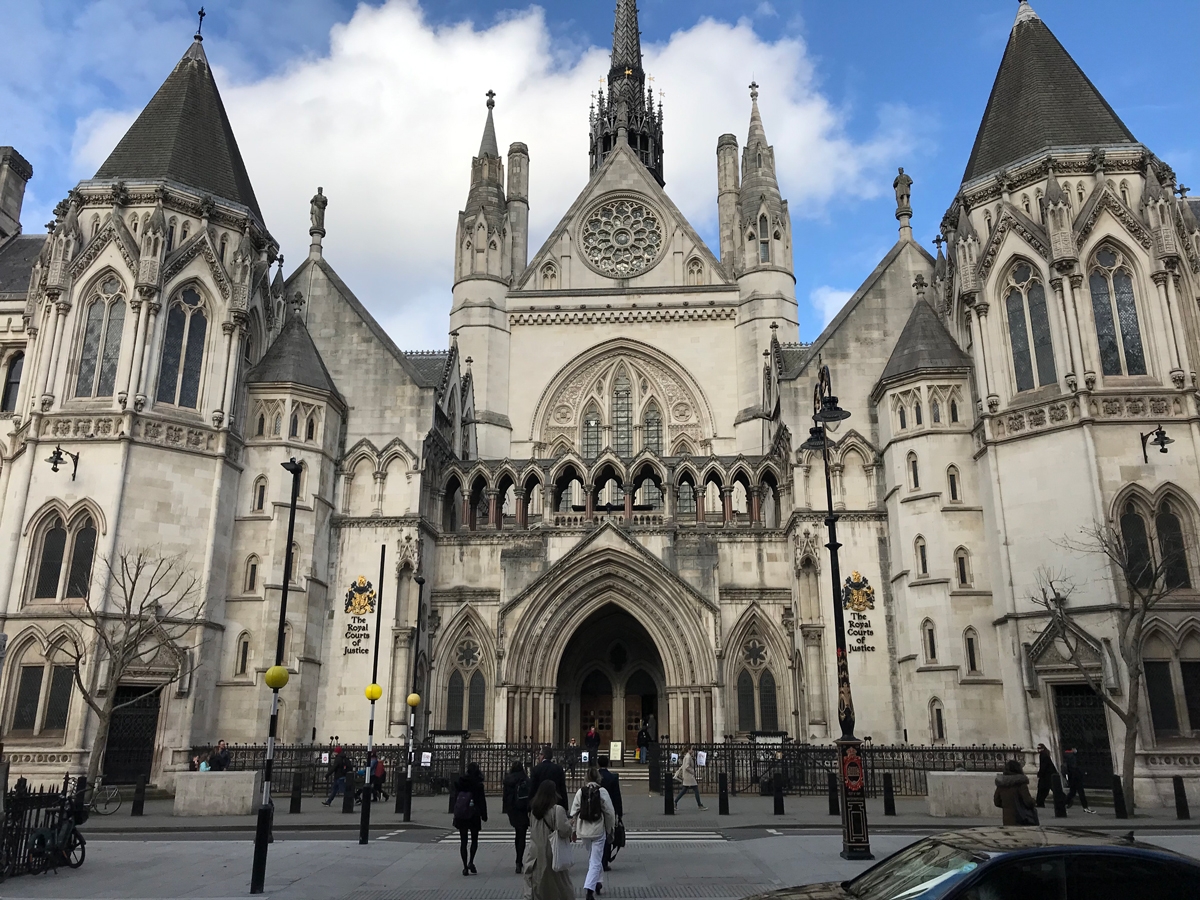 The Enchanting Buildings of The Royal Courts of Justice: The Heart of Legal London
Fleet Street is choc-o-block full of medieval buildings and churches, and I guarantee you the peeling of ancient church bells as you walk this stretch. Halfway down Fleet Street is a white and black Tudor-style gateway with a sign for Temple Church and dated 1748. Duck under these arches and enter the refined world of the wigged and robed English barrister. 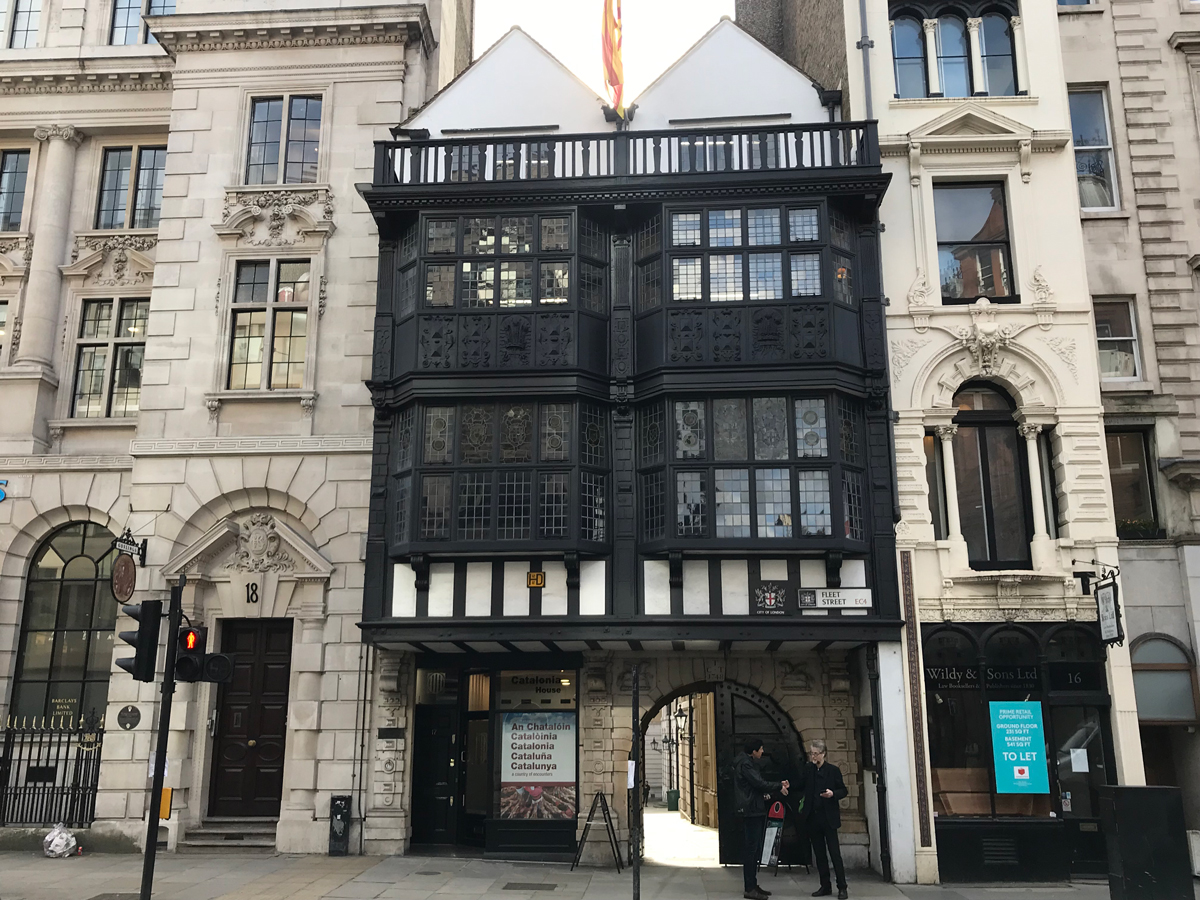 Duck Through the Tudor Arched-Gateway for Entry to the Cobbled Streets and Paved Courtyards of Legal London
You will instantly feel miles away from the usual traffic-clogged rush of London. In ancient times the land you are walking on belonged to the Knights Templar (which explains the name, Temple) who were an order of militant Catholic monks that fought in the Crusades and defended pilgrims visiting the Holy Land.
The first notable building is the Temple Church, built in 1185 by the Knights Templar and used by them for initiation ceremonies. It has a magnificent wooden doorway, as ancient as it gets, that is well worth exploring. The door is set within fluted stone arches carved with small figures of worshippers with hands clasped, I assume signifying the initiation ceremonies? 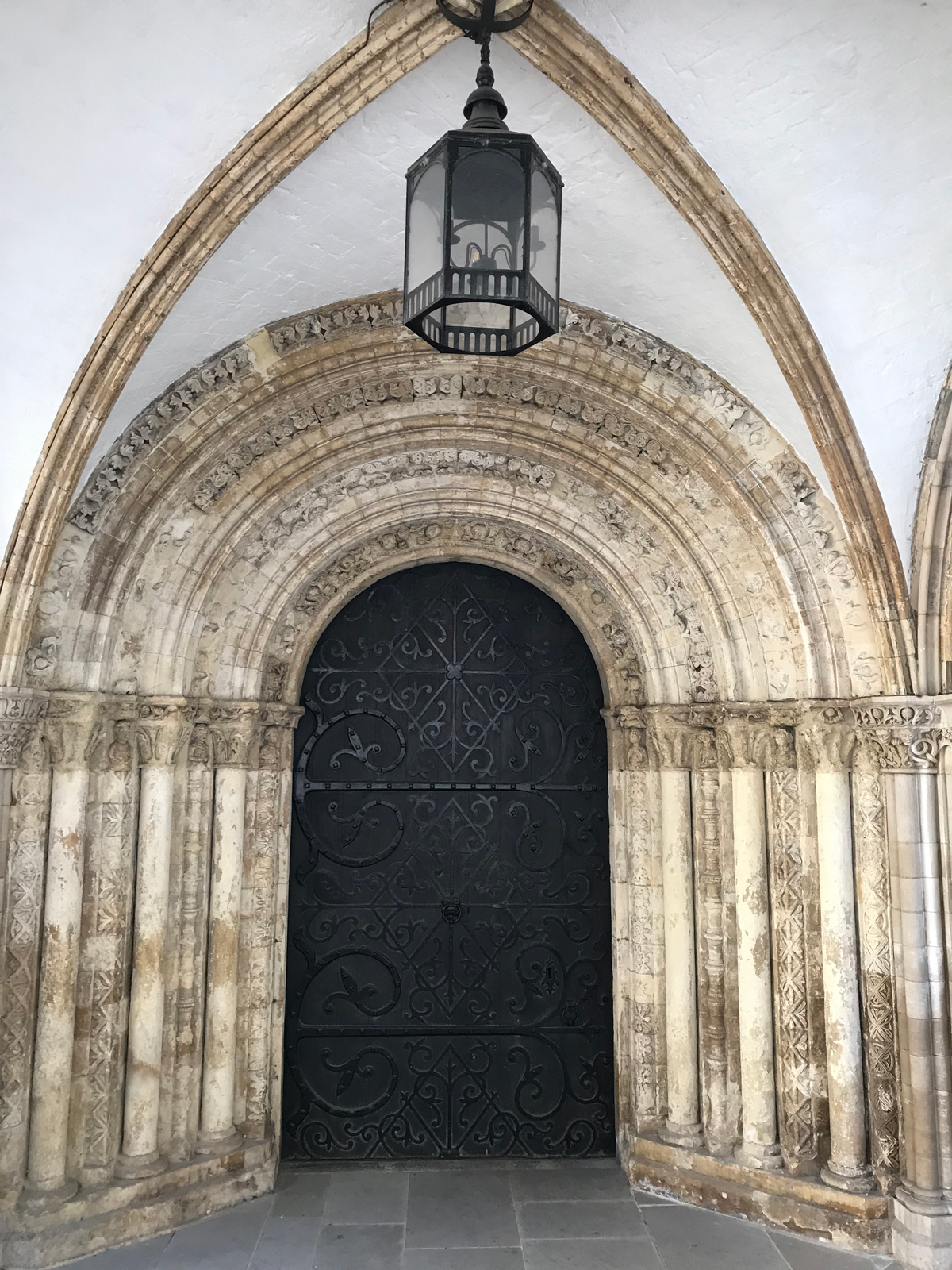 Examine the Exquisite Entrance to the Ancient Church of the Knights Templar
Past the church is Kings Bench Walk, lined with the chambers and legal offices of barristers, at the end of which is the famed Inner Temple Gardens, an oasis of green with huge London plane trees that overlooks the river Thames.
These are the time-locked lanes and ancient flagstones that Gandhi walked on, training himself as a barrister capable of advocating eloquently for the people of India and delivering freedom and basic human rights for his countrymen. 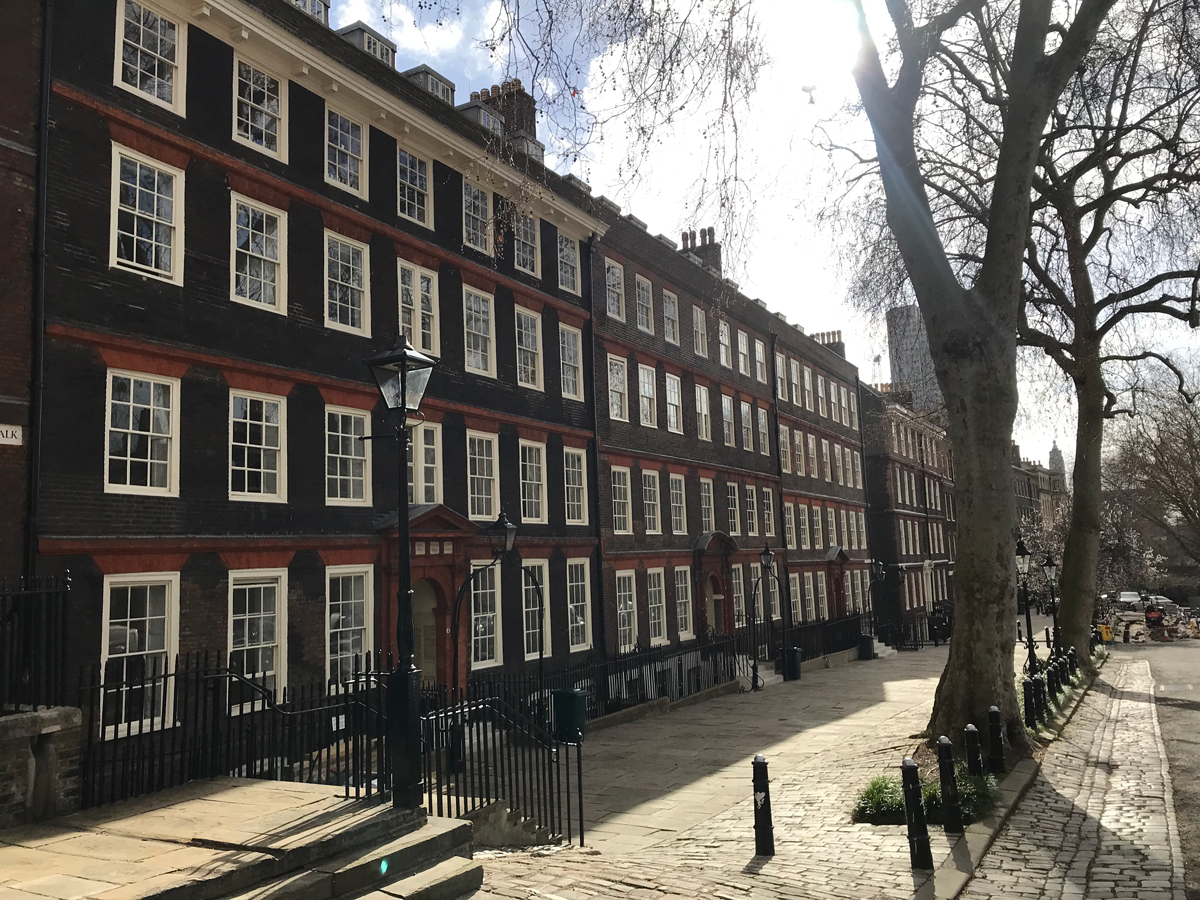 Kings Bench Walk of Inner Temple: the Wigged and Robed Offices of Legal
Before leaving this dreamy world – and incase you are so inclined – you could refresh yourself at a venue that Gandhi unlikely visited (but perhaps Nehru and Jinnah did!).
One of London’s oldest pubs is just around the corner. Ye Olde Cheshire Cheese has existed since the mid 1600s, and was a favorite of literary greats like Charles Dickens and Samuel Johnson, the father of the modern English dictionary, who’s home was just behind the pub and is now a museum.
I treated myself to a pint here, taking in the pub’s dim ambience and wooden benches, with portraits of Samuel Johnson and lots of “mind your head” signs for navigating the labyrinth interiors. Refreshed with a cold lager and sit-down time to reflect on the day, I was ready to go again.

Next stop, where Gandhi stayed on his last visit to London.
In 1931 Gandhi attended the Round Table Conference as a member of the Indian National Congress, with the objective of discussing the path to India’s independence.
While the talks were held in the rarefied atmosphere of St James Palace – still a royal palace, where Princess Anne now resides – Gandhi chose to stay instead with his friends Muriel and Doris Lester, in a room on the top floor of Kingsley Hall, a community center in slummy East London.
Gandhi had stayed here for twelve weeks and his visit galvanized this part of London. He received here famous visitors like Charlie Chaplin and George Bernard Shaw, and interacted freely with the locals on morning walks, making numerous school visits as “Uncle Gandhi” to excited children.
To get to Kingsley Hall, catch the metro to Bromley-on-Bow station which is about ten stops (twenty minutes) from Temple. Then google-map your way to Kingsley Hall on Powis Road, a five-minute walk from the station through an area of mid-rise council homes. 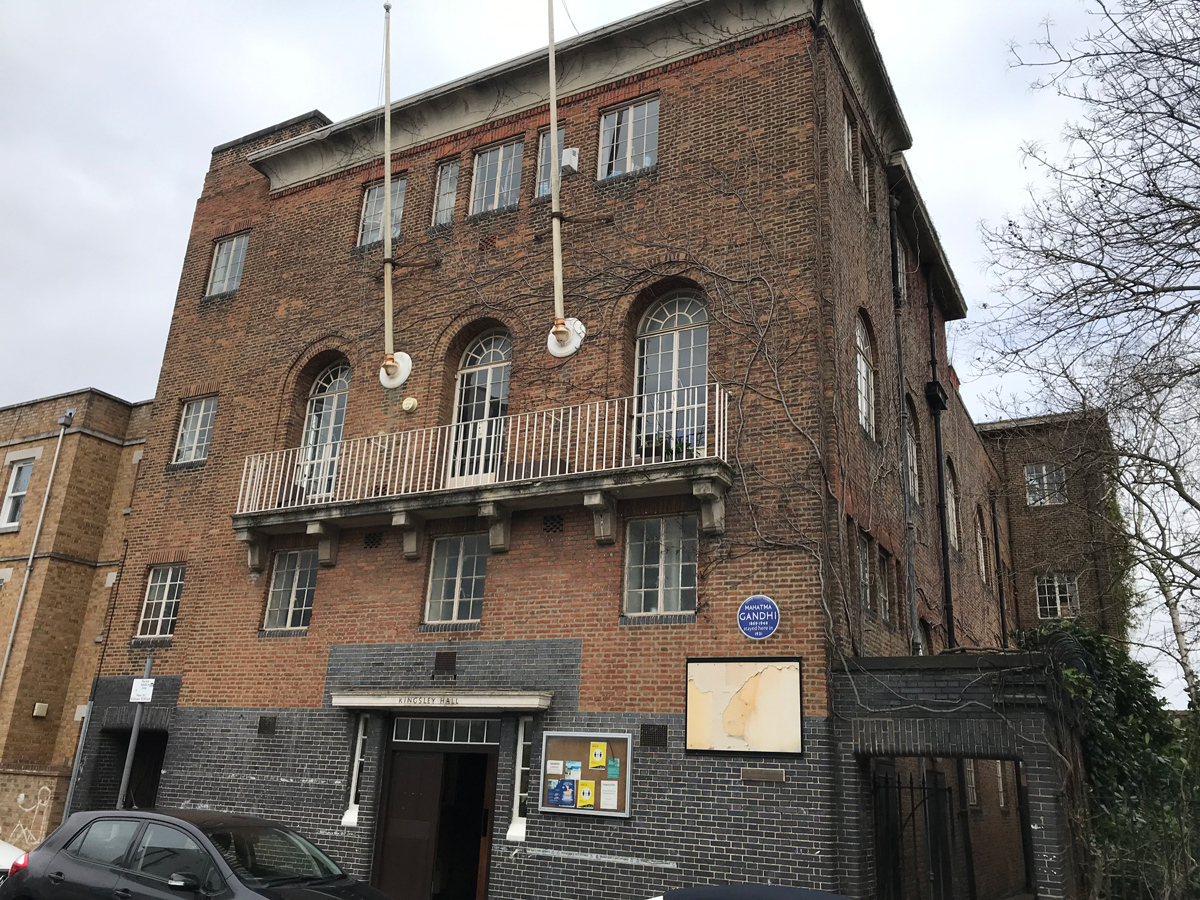 Kingsley Hall in East London; Another Blue Plaque to Announce The Top Floor Where Gandhi Stayed on His Last Visit to London.
At Kingsley Hall I met the grey-bearded David who is employed by the community center and looks after the premises. David had been living here for many years, on the top floor right next to where Gandhi had stayed.
We entered a wooden-floored hall on the ground floor, empty except for a bust of Gandhi, which is used sparingly now for occasional ballroom dances and wedding functions. This is the hall where Gandhi was welcomed in 1931, and also where he celebrated his 62nd birthday on October 2, 1931.
The Gandhi Foundation has rented some rooms on these premises. It was closed, as was Gandhi’s one-room living quarter due to renovation. So, to this extent my pilgrimage remained incomplete. But David could show me the adjoining garden instead, which had a circular peace dial with the words “blessed are the peacemakers” written in different world languages.
It all seemed a little neglected and run down. Two doves sitting on the forlorn branches of a leafless tree looked down at me, capturing the mood. Could not the Indian Embassy do much more to adopt this place, which has a direct connection with the father of the nation?
David offered his insights. He feels…”the world is having a hiccup”; and was forgetting great compassionate leaders like Gandhi and their message of inclusion and empathy and being human together.
If so, that’s sad.

Finally, a last metro ride to Russell Square station, from where it’s a ten-minute walk to the charming Tavistock Square.
This square, in the fashionable Bloomsbury district, has a special connection with India. At its center is a life-size statue of a sitting Mahatma Gandhi, built on a curved pedestal that is specially designed for accepting flowers and candles as offerings. 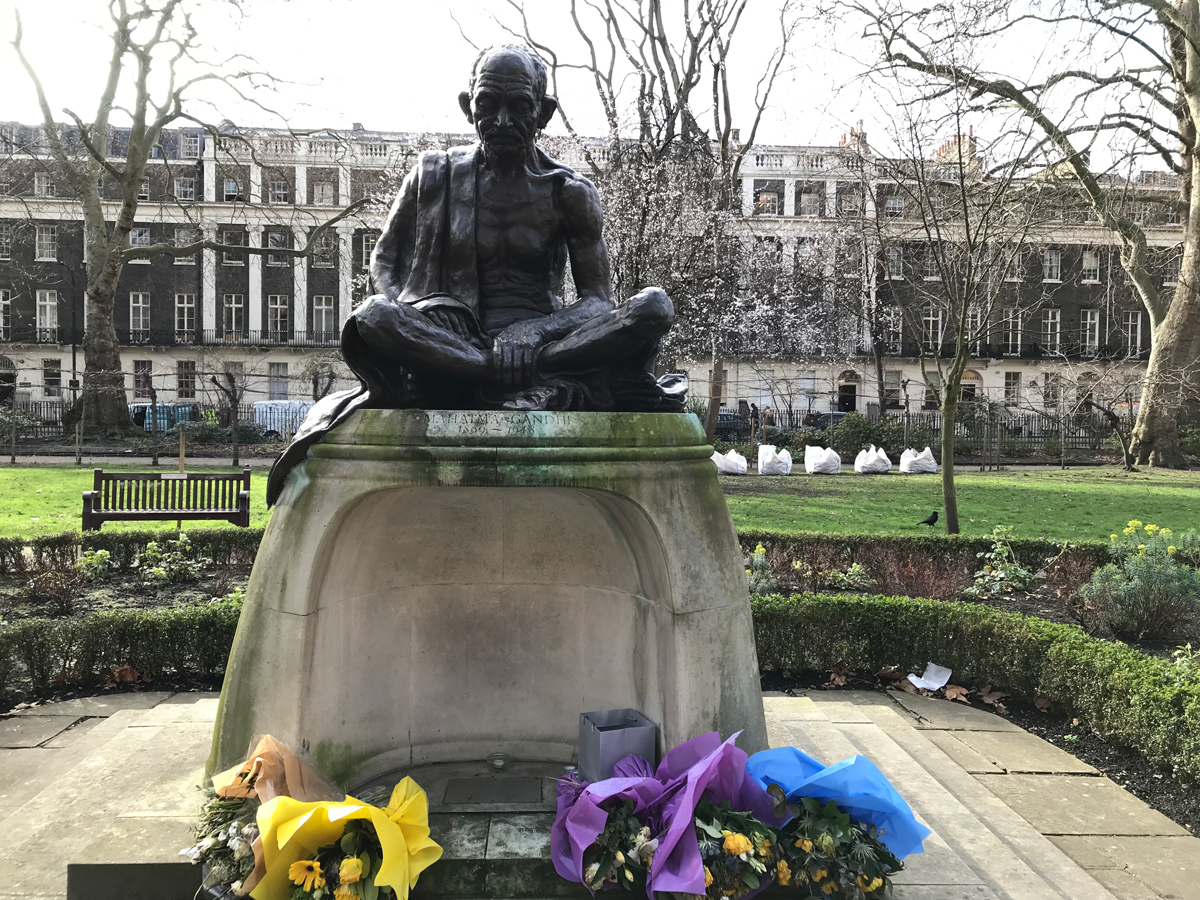 A Seated “Father of the Nation” Bestows His Blessings on Those Who Seek It
Tavistock Square is called London’s peace park. For, besides Gandhi’s statue – which is a heritage-listed monument attracting visitors throughout the year – the park has a beech tree planted by Pandit Nehru and honored with a plaque, a flowering cherry tree to remember the victims of Hiroshima and on the grass right by the entrance, a Conscientious Objectors Stone highlighting an anti-war “right to refuse to kill”.
Even the buildings surrounding the square have an India-story to tell. Directly in front is the headquarters of the British Medical Association, built by Sir Edwin Lutyens, the same famous architect who built New Delhi from scratch and has left us the legacy of “Lutyens Delhi”.
This building originally housed the Theosophical Society, one of who’s regular visitors was VK Krishna Menon, India’s former Defense Minister who drafted the Preamble of the Constitution of India. It was Menon who chose Tavistock Square as the site for Gandhi’s statue.

There. You are now a certified expert on London and Gandhi. And as a bonus, you have also qualified for super-user status on the London metro system!
Next time we meet, I’ll hand you your badge.
Print page